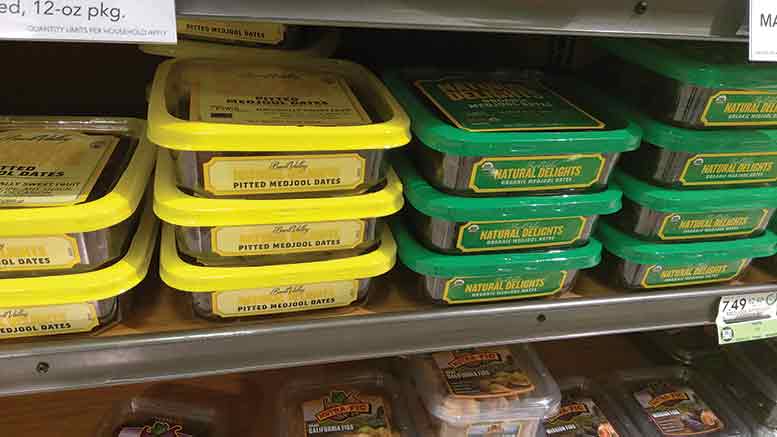 Brisk business reported during holidays but year-round sales growing too.

Dates, long enjoyed as nutrient-rich power snacks and desserts, are surging in popularity, both at retail and in foodservice.

Always strong during Thanksgiving, Christmas and Ramadan, sales of dates are growing during the rest of the year, too. 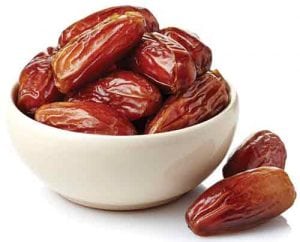 “The date category is growing tremendously,” says Ben Antongiovanni, president of Pure Palm Produce in Bakersfield, CA. “Over the past five years, dates have seen double-digit growth year over year.”

Traditionally, older consumers were the main purchasers of dates, he adds. “Now, we are seeing a much younger demographic an health-conscience consumers purchasing dates more often.”

Chad Hartman, director of marketing for Truly Good Foods in Charlotte, NC, says he is seeing increased usage from consumers during the holidays “and year-round usage on the foodservice side of our business.”

Dates are a great sweetener for dishes or a nice dish accent used whole. They are very versatile, as they can be used whole, chopped or pureed.

“Only a small percentage of the U.S. population is currently consuming dates,” notes Ed Lopez, sales representative for Peter Rabbit Farms in Coachella, CA. “As young people continue to find Medjool dates, we see great opportunities for growth in this category. Medjool dates have been around for centuries; they seem to be synonymous with Middle Eastern countries, but their distribution has been great to all cultures.”

“Trends you see in dates are the CPG ingredient sectors picking up steam on utilizing dates for alternative sweeteners, binding capabilities, mold inhibitors, shelf-life extension (and) the overall health benefits that dates bring from a nutritional perspective,” says Douglas D. Resh, vice president of sales & marketing for Woodspur Farms, LLC, which claims to be the largest, integrated date farming operation in the United States in acreage and in volume, growing Medjool, Deglet, Zahidi, Honey and other exotic dates.

The popularity of dates in the foodservice arena is a trend on the rise, adds Resh, with chefs “using them in cuisine as well as hotels featuring dates on the menus or offering them as treats for their guests in lieu of chocolate on the pillow.”

Ari Kamberian, director of operations for Tazza Inc. in Los Angeles, says when it comes to Medjool dates, “There are many trends that factor into sales. First, the quality of the dates will matter most. Customers looking for dates are generally particular in which grade they will carry in their stores.”

Here’s what retailers should know to sell even more:

The majority of consumers for dates are the ethnic population, according to Resh. They are especially popular among consumers of Middle Eastern, Indian, Pakistani, Filipino and northern African cuisines.

“When I visited a local store in Indio on a recent weekend, I was struck by how many of the customers were older,” recounts Gina Dockstader, an owner of Doc’s Organics, Brawley, CA. “Retired snowbirds who couldn’t get enough of the date shakes as well as purchasing dates for consumption. I think the younger generations are just coming around to embracing dates.” She says date sales will continue to rise, especially domestically. “Health-conscious consumers will help fuel this trend. As suppliers, we need to do a better job of spreading the word that they can also join the ranks of so-called ‘superfoods,’ such as avocados, blueberries, kale and garlic.”

At retail, Resh says, marketing campaigns for the health benefits of dates, “as well as evening-out sales between supermarket retail sales and the ingredient sector,” have proven effective. “At the moment, the big trend is energy bars or energy balls. Other uses are as an alternative sweetener for baking, vegan milks, ketchups, marinades and salad dressings.”

Hope Barbee, sales manager for Double Date Packing in Coachella, CA, thinks there is “some confusion in the market as to what to label the (dried) fruit. Medjool Dates are not a dried product; it is a fresh fruit. They require a cool/cold environment.”

Truly Good Foods’ Hartman says the missing sales piece is marketing dates as a snack. “They have a great caloric value per date, have great texture and are slightly sweet. There are year-round opportunities if retailers would display dates as a snack.”

“There are year-round opportunities if retailers would display dates as a snack. They are not attractive, but taste twice as good. Dates are the hidden gem of dried fruit, not as appealing to the eyes, but twice as tasty.”

Since dates are typically found in produce sections, he adds, “Temporary price reductions and increased signage directing consumers to the product would work best. They are not attractive, but taste twice as good. Dates are the hidden gem of dried fruit, not as appealing to the eyes, but twice as tasty.”

Experience has taught Kamberian and his colleagues that aggressive promotions during the Ramadan season work best to increase the sale of dates. “It’s important for retailers to be well stocked on quality fruit from the beginning of the season in order to offer these aggressive deals during the peak season, when the demand for the fruit is at its highest.”

Nancy Dudney, sales representative for Patagonia Orchards, LLC in Rio Rico, AZ, says retail “does not do proper date displays, with only a few put out, so there is nothing to catch the eye and say abundance. We carry spectacular organic Arizona dates, and I am always surprised at the extremely small orders of nutritious, delicious dates considering they have a great shelf life.”

Without proper display, “They become nearly invisible unless someone is specifically looking for them,” she adds.

Pure Palm Produce’s Antongiovanni says retailers need to display fresh Medjool dates as a fresh item in the produce section. “Get them out of the dried-fruit section and off the floor. Medjool dates are still an impulse buy, and need to be prominently displayed with the bananas or berries. Secondary displays also drive sales,” he says.

Tazza’s Kamberian recommends retailers make themselves aware of what types of dates they are purchasing to put on their displays. “From what is observed on our end, chain retailers generally don’t supply the high-quality Medjool dates our customers look for. They typically carry smaller size fruit with some form of puffy skin or separation,” he says.

Kamberian says it’s important to note, “for dates, quality itself is not enough; size plays a big role as well in the purchase decision.”

Though the exact representation of the size of the Medjool date market is not known, he adds, “One thing is for sure — the demand for dates is growing year after year.” On good-graded Medjool dates, sizing, from smallest to largest, includes Medium, Extra Fancy, Large, Jumbo, and Super Jumbo.

Kamberian says packaging makes a difference in date sales. “Traditionally, dates were packaged in bulk 11-lb. boxes, though we have seen a swift change in this representation to much smaller sized (1-, 2-, 4-, 5- and 7-lb. boxes). Retailers for the most part can gauge what volume their customers are looking for in order to supply them with that specific packaging.”

Dates are also price sensitive. “While quality is very important, price is too,” notes Kamberian. “It is no good to bring the highest quality grade if the retail price is too high. We think an example of a high retail price point is anything above $7.99 per pound, though at times this can be justified by superior grade, quality and size.”

DO DATES HAVE A FUTURE?

“We believe that 2018 once again will be a fruitful year for Medjool dates,” emphasizes Kamberian, “with an increase in demand, specifically on larger-sized fruit.”
The remainder of 2018, predicts Woodspur Farms’ Resh, “will continue to be an explosive year for dates both on the consumption and usage within the ingredient deck of CPG companies.”