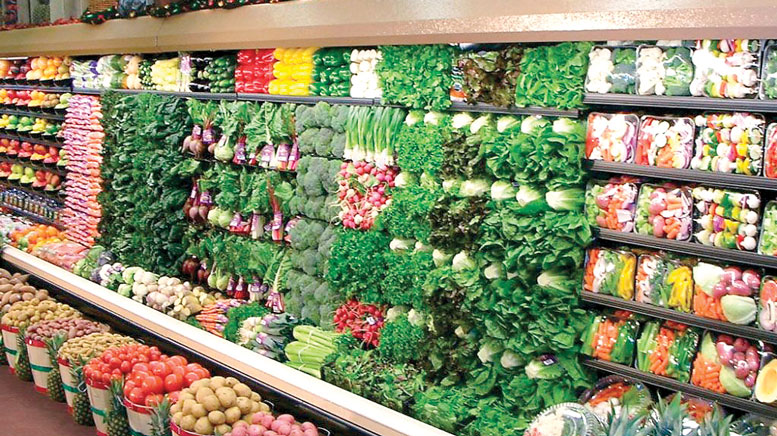 Retailers east of the Rockies are drawn to the local products that can be delivered in less than one day in most markets.
PHOTO COURTESY OF CASTELLINI

With its bountiful produce, the Midwest region offers plentiful choices for retailers and foodservice companies. Wholesalers and growers provide a wide variety of vegetables and fruits, and pivot on their biggest sellers.

“For us, hands down it is potatoes, and onions as well,” says Michael Gatz, director of business development at Bushman’s Inc., in Mukwonago, WI. “We grow mostly the Russet varieties. The soil is also conducive for red and yellow potatoes, but the Russet is year-round — to grow and also store.”

Bushman’s grows and markets potatoes from 24,000 acres, and the company utilizes 25 packing facilities. The fourth generation family business handles national distribution and marketing for regional farmers, and ships over 10 million pounds of produce per year.

“The independents and big chains make a major push for local produce in the spring, summer and fall. People see it as a way to cut down on the carbon footprint, to have your food grown close by.”

“Volume-wise, we probably move more radishes than everything else,” says Chad Buurma, president of Buurma Farms, Inc., in Willard, OH. “But we have a nice complement of everything: greens, turnips, mustard, collards, kale, lettuces, green onions, parsley, dill, cilantro, green and yellow squash, peppers. Customers can place an order with us and have a truck with 30 different items.”

Buurma Farms grows crops on 2,500 acres in Michigan and Ohio, and ships 2 million packages of fresh vegetables annually. It features eight varieties of radishes — depending on time of year, location and soil type — and lettuce varieties that include red leaf, green leaf and romaine.

“Tomatoes out of Michigan are a big item,” says TJ Fleming, sales manager at Strube Celery & Vegetable Company, located in Chicago. “And all the dry vegetable — peppers, cucumbers, squash, hard squash, corn — from Illinois, Indiana, Michigan, Wisconsin… we get a lot out of Ohio too.”

Strube’s customers are retail (75%) and foodservice companies (25%). They start arriving to the Chicago wholesale market at 2am, pull their trucks up to the dock and make their selections for the day. Strube can also deliver to the customers’ door.

Midwest Produce, And The Desire For Local

The USDA’s Midwest Climate Hub (which develops science-based information for agricultural managers) says there are over 127 million acres of agricultural land in the Midwest. Fruits and vegetables, including green beans, raspberries, cucumbers, onions, peaches and tomatoes, are grown on 25% of this land, while corn and soybeans are grown on the remaining 75%.

“The Midwest is extremely important to U.S. produce sales,” says Joe Sharp, vice president of procurement for Castellini Company, located in Wilder, KY. “It gets really hot out west in the summer months, and quality tends to go down. It is critical to have that Midwest supply to fulfill produce demand in the region.”

Castellini has 125 years of industry expertise, a carrier network that covers the U.S., and an end-to-end distribution process. The wholesaler distributes conventional items (1,200 items), organic and local produce from Michigan, Ohio and Indiana.

“The Midwest is a very dependable place for the U.S., especially east of the Rockies. There is a lot of produce grown here,” says Todd Miedema, vice president and secretary of Miedema Produce located in Hudsonville, MI.
Miedema grows seasonal vegetables including celery, summer squash, cucumbers and cabbage. Its main crops are radishes (grown in Michigan and Arizona), and root crops such as parsnips and turnips. Its mixers (mixed vegetable loads) allow retailers to rotate inventory and keep it fresh.

“I can wash, cool, bag and ship produce, and in three to four hours, have it sitting in Chicago, Detroit, Indianapolis,” says Miedema.

Farm operators look at how efficient it is to bring each piece of produce to market, not just how far it is transported. Growers and wholesalers may consider produce “local” if it can arrive within a day or overnight.
“The independents and big chains make a major push for local produce in the spring, summer and fall,’ says Fleming of Strube. “People see it as a way to cut down on the carbon footprint, to have your food grown close by.”

With local produce, Midwest growers can work directly with retailers and foodservice companies, instead of having the largest grower set the price point. “Now a local farmer can make a living without having 1,000 or 5,000 acres. They don’t have to be a monster farm,” says Gatz at Bushman’s.

COVID, The Consumer, And Current Trends

As far as trends, consumers bought large quantities of groceries during the pandemic, and cooked big family dinners at home. But growers see that changing quickly.

“During COVID-19, we couldn’t supply enough; it was crazy at retail — wonderfully crazy, really,” says Gatz. “Now 10-pound bags of potatoes are really slowing down, because people are going to the store more often and buying 5-pound bags. They are getting out as often as they can; they are tired of being home.”

Other industry experts noticed a related trend with foodservice.

“As COVID hit and a lot of restaurants were closed or operating at 25% capacity, foodservice providers took a big hit,” says Bill Loupée, chief operating officer at Ben B. Schwartz & Sons Inc., located In Detroit. “We saw retail exploding as foodservice diminished. We are now seeing it normalize and kind of level out. So that was a big rollercoaster ride.”

Ben B. Schwartz is a wholesale distributor of fresh fruits and vegetables, including Michigan apples and blueberries. The company serves local and national chain stores and foodservice providers, and it also distributes to Toronto, Atlanta and beyond. The company recently added organic lines of Midwest produce, after noting people buying more organic.

Another trend is an increase in “healthy vegetable” sales for foodservice. “Cilantro, dill, green kale, and other healthy super foods are taking off. I think it is the combination of cooking shows and the media talking about super kales,” says Buurma.

“The price of trucking from California has gone up by 50% in the past year and a half,” says Sharp of Castellini. “You might want to pick up on a Monday and not have access until Tuesday or Wednesday. This is why we love the regional deals — we have trucks in the Midwest, and we can backhaul their products and they are fresher.” He also says consumers enjoy Midwestern-grown broccoli and cauliflower.

There are national and local organizations for marketing, such as Potatoes USA and the Wisconsin Potato and Vegetable Association (WPVGA). Bushman’s, a national grower with three brands, counts on these associations to help promote its products.

Ben B. Schwartz is one of eight large wholesalers that market produce directly to buyers who utilize the Detroit Terminal Market. “It is like a farmers market on steroids, for commercial level sales. We start receiving around 12 midnight, and work seven days a week,” says Loupée. He adds, “We have gained market share by having a high quality product. We don’t want lower grade, we want to bring in the best and be known for selling the best.”

In the Midwest, harvest in most states starts in June with a variety of lettuces, greens and tomatoes. It’s July through September for many other crops, including zucchini, cucumbers and blueberries; May through November for radishes; August through October for potatoes and onions. Certain crops can catch an early frost, and growers have to watch for that.

“From my viewpoint, the challenge in the Midwest is the length of the season,” says Castellini’s Sharp. “It doesn’t go very long. So it’s not always easy for retailers or distributors to plan long-term, when Kentucky-grown cabbage might only be grown for three weeks and California-grown cabbage might grow year-round, making it easier to price and plan.”

Midwest wholesalers buy from several locations: the Midwest, East Coast, West Coast and South. “As far as berries from the Midwest, there are Michigan blueberries primarily,” says Fleming of Strube.

Like other production areas, the Midwest region faces challenges with stringent food safety guidelines, a diminished labor force and pest. “If you don’t do something, the insects will eat you alive,” says Miedema. “You can be out there and have aphids come in on the wind. You could have a beautiful organic field, and they’ll move in and wipe out your crop.”

Then there’s the variable Midwest weather.

“We often deal with having too much rain. We deal with it being too cold; we’ve had frost; we’ve had too much sun,” says Miedema. At the same time, “Drive along the Michigan shoreline — you get cherries and a lot of other produce. Having the protection of that body of water allows for a lot of variety.”

“The weather, how the crop is seasonally — we can’t control that, but we can control shipper-grower partnerships, treat super growers fairly, and move product we need to move.”

The advantages of Midwest produce, echoed by grower and wholesaler experts, were freshness, proximity and accessibility.

“I can harvest something here this morning and have it to New York City by tomorrow morning, even though it’s 500 miles away. Freshness is very important to everyone,” says Buurma.

“If it’s coming from California, you wait five days. But if you buy locally, you get it the next day,” says Fleming of Strube.

Synergies From Field To Fork

For growers and wholesalers, synergies are driven by marketing partners. “Our potatoes can be at the same temperature, and on the same truck, as sweet potatoes. We also work with Vidalia onions, so there is a marketing opportunity there. But a potato grower is not going to market with a grape grower,” says Gatz of Bushman’s.

Other companies say synergies come from strong relationships built over many years. Grower Miedema Produce has operated for 50 years. The wholesalers Strube, Castellini and Ben B. Schwartz & Sons, and the growers Bushman’s and Buurma Farms have each been in business over 100 years.

“Retailers depend on us to have the type of product they need at the exact time and day they need it, at the exact price. We have to keep stock levels where they need to be,” says Loupée of Ben B. Schwartz. “The weather, how the crop is seasonally — we can’t control that, but we can control shipper-grower partnerships, treat super growers fairly, and move product we need to move.”

Michigan: Product Diversity Hits the Mark in the Midwest