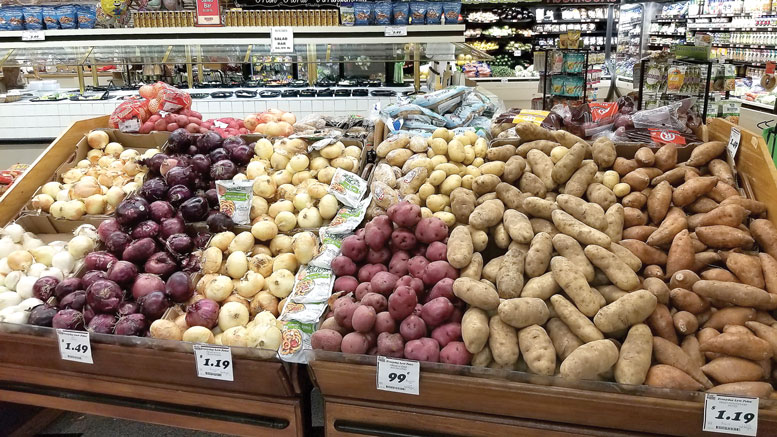 During the pandemic, staples are becoming more important. Effective merchandising of potatoes and onions has transformed into even higher value as retailers are adjusting for social distance spacing in stores and providing additional shelf space for items shoppers are purchasing in high quantities.

A retail produce category staple, potatoes and onions are high-volume movers, category sales leaders and are some of the highest promoted items in stores. In a breakout session at the Produce Marketing Association’s virtual Fresh Summit in October, potatoes were described as a “pandemic powerhouse.”

“Potatoes are the No. 1 vegetable item purchased,” says Dave Rhodes, director of produce and floral for Findlay, OH-based 50-plus store retailer Fresh Encounter, Inc. “They can be consumed in so many ways, from being the main dish, as an ingredient in a recipe to a side dish. In the winter months, you need a versatile item like this to promote. Both potatoes and onions have great value for the dollar and offer good margins for retailers.”

Onions are a key item to promote. “Onions are considered a staple to most consumers, so overall the retailer can count on sales,” says Herb Haun, promotion committee chairman of the Parma, ID-based Idaho-Eastern Oregon Onion Committee (IEOOC) and an owner of Haun Packing Co., Weiser, ID. “Since onions generally have a good margin for retailers, it is wise for them to utilize promotion material that commodities or shippers can provide. Promotion material such as recipe ideas are good method.”

Potatoes are prominent items. “Statistically, 60% to 70% of all shopping carts have potatoes as part of their daily purchases,” says Eric Beck, director of marketing for Wada Farms Marketing Group LLC, Idaho Falls, ID. “It is a pivotal thing and makes a big part of the overall cart sales for most retailers.”

As the holidays approach, potato marketers anticipate stiff competition from retailers on pricing larger-size bagged potatoes. Shoppers never just purchase a bag of potatoes, according to IRI, a Chicago-based market research firm. When a shopper buys potatoes, that shopper’s average total basket ring is $85 compared to $43 without potatoes.

Potatoes and onions merchandise well together. “The greatest thing about potatoes and onions is their versatility,” says Rachel Leach-Atkinson, category and brand manager for Bancroft, WI-based RPE, Inc. “Onions, low in calories, are rich in Vitamin C and can easily add a bold and impactful flavor to any recipe. The key to success in marketing potatoes is to have a well-rounded portfolio of items that will provide as many consumers as possible with an option for their meal occasions. Potatoes contribute as much as 11% to produce sales volume in some channels, meaning they are one of the most important traffic drivers in the department, especially during the holidays,” says Leach-Atkinson. Shoppers spend double when placing potatoes in the cart, $102 with potatoes vs. $51 without.

“Both potatoes and onions are in the top 10 pandemic powerhouses, which are those fruits and vegetables that increased the most in absolute dollar sales during the first half year of the pandemic,” says Roerink, citing IRI data. “If we figure that 53% of school-aged children are partaking in virtual education, that is moving a lot of meal occasions to the home.”

Commodity boards work with retailers to support the entire category and provide research and marketing techniques on how to improve overall potato and onion sales as opposed to a specific product.

In the past, the Idaho Potato Commission (IPC) promoted how well Idaho potatoes were doing within the potato category. Because Idaho potatoes command 35% category market share, the IPC shifted its focus to advising on the entire category. “The IPC retail promotion directors have had great success in advising category managers and buyers on how to best position themselves to drive more profitability in the potato category,” explains Ross Johnson, director of category management for the Eagle, ID-based organization.

Potatoes sell. “Potatoes are No. 1 in volume sales for retailers,” says Kayla Dome, global marketing manager of Potatoes USA, Denver. “Potatoes and onions are found in a lot of baskets together. Since March, potatoes have increased in dollar sales more than any other produce commodity.”

A recent IRI basket study found 88% of households purchased potatoes from July 2019 through June 2020. Potatoes were purchased with other items such as onions, milk, eggs and cheese that are considered household staples due to their household penetration percentage, notes Dome. During the same period, consumers purchased fresh potatoes on average 10 times. Kantar Insights Consulting found that 51% of fresh potatoes were merchandised with onions.

“Potatoes are the key driver for the produce department,” says Johnson. “On average, potatoes make up 25% of all produce tonnage going through the department and that number only intensifies during the holidays. Potatoes are one of the greatest produce items due to their versatility in the home.”

From March 16 through October 4, fresh potato sales were up 30.1% in dollar sales and 22.2% in volume sales. Total sales equaled $2 billion and 2.4 billion in volume, higher than sales were in the last five years, notes Dome.

Potatoes remain a high volume mover. “They are the highest-sold vegetable for the retail segment and are some of the highest-consumed vegetables by consumers,” says Joey Dutton, key accounts/onion sales manager for Potandon Produce LLC, which grows and ships potatoes and onions from Idaho Falls, ID. “Potatoes and onions pretty much sell themselves because of the usage and different ways that consumers will eat them. They are super foods that can be prepared for every meal in the day. When consumers think of potatoes or onions, they almost automatically think of both.”

Potatoes are fast sellers. “One of the things retailers often forget is the speed with which the potato category sells product,” says Johnson. “Not only do potatoes enjoy one of the lowest shrink rates in the category, they also are consistently the freshest product on the sales floor.”

Onions, particularly sweet onions, are seeing sales increases. “Overall, the category is booming,” says Delbert Bland, president of Glennville, GA’s Bland Farms LLC. “It continues to increase because more and more people are developing a taste for sweet onions. Looking at per-store sales vs. previous years, every year it seems to get a little better.”

SIGNS OF THE TIMES

An easy update retailers can make to improve their potato sales is by adding signage calling out the potato section. “If a potato display has a sign visible from the entrance, fresh potato sales can increase by almost 3%,” says Dome. Potatoes tend to perform best in the back, left section of the produce department, and about a third of retailers display their potatoes in that location, she says.

The IPC analyzes Nielsen data and compares retailer sales. “One thing we have learned during this pandemic is that all retailers feel like they are ‘knocking the cover off the ball’ in the potato category,” says Johnson. However, when the IPC compares a retail chain against the rest of market, it is able to show them insights to how they can compete to win the ever-important potato shopper. More households purchase potatoes than bananas. Potatoes possess an 88% household penetration rate compared to bananas’ 87%, he says.

As both are pantry staples, potatoes and onions pair well. “The commonality of them being purchased together at the same time is likely greater than not,” says Wada’s Beck. “In many dishes, they complement each other, which is the best reason.” Because potatoes and onions are root vegetables, they are categorized that way and are commonly displayed on the same tables. “They’re always within close proximity of each other,” says Beck. “As they’re pantry-filling items, the best way to market potatoes and onions is for retailers to make sure they have them and give them their proper space.”

The IPC advises retailers to consider space to sales allocation. “Retailers can really help their departments excel by looking at the amount of dollar sales a category contributes and allocating the appropriate amount of space to that category,” says Johnson. “This will help save on labor and also reduce out-of-stocks on high velocity items, which will contribute to a successful category.”

Retailers are becoming more aware of their stock-keeping units (SKUs). “They’re doing a lot of SKU rationalization, making sure they have the right packs and varieties of potatoes and onions on the shelf, not having too many things, but providing a variety of bags,” says Beck. “Having the right SKU makeup makes a big difference.”

IPC research shows russets are the potato category driver and what shoppers look for in ad circulars. “Up to 84% of potato shoppers know they are going to purchase potatoes before they leave their homes,” says Johnson. “So much excitement has been found in the convenience category that many have gone too far with merchandising an excess amount of convenience products. One thing we are working to help retailers understand is that the convenience and gourmet potatoes do not cannibalize from the driver of the category.”

In 2018, the most common size of a potato section was 8 feet (14% of stores) followed by 10 feet (13% of stores), according to Potatoes USA. Space allocation varies significantly by retailer and even by store. The 2019 Path to Purchase study found 76% of consumers were purchasing potatoes at full price, which shows fresh potatoes’ value originating from the commodity’s versatility vs. its price tag, says Johnson.

Merchandising a variety of potatoes and onions is critical. “Having the right assortment available and promoting these items regularly will keep them moving and create good volume for retailers,” says Potandon’s Dutton. “Having a good traffic flow and good visibility within the store and making sure that your items are fresh and rotated are important. Keep a fresh look, use promotions and call out your items for your consumers. Using cross promotions with other items within the store will help grow your sales.”

While potatoes naturally go with onions, displaying them together produces mixed results. Merchandising potatoes with onions in the main display led to a decline in fresh potato sales by -0.3%, notes Dome. “Potatoes benefit most from standalone displays, which can grow the category by 4.9%,” she says.

A way to prevent consumer dissatisfaction with green potatoes is to not overexpose potatoes to fluorescent light. Limiting the amount of fluorescent light via tinting or displaying potatoes in shipper-supplied bags employing light blocking technology can prevent the greening, says Wada’s Beck.

Most weeks, Fresh Encounter includes potatoes in its ads. Those potatoes could be bulk baking potatoes, 3-, 5- or 10-pound bags, or 5-pound bags of red and gold potato or the B-size potatoes. The chain also directs shoppers to the IPC’s website for numerous recipes. “Another strategy when advertising potatoes: show a prepared image rather than a bag of potatoes,” recommends Rhodes.