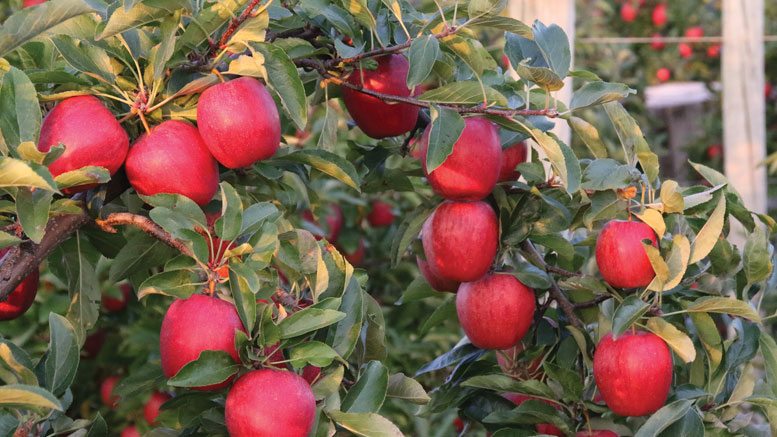 Apples are an important part of Michigan’s agricultural mix. They lead the state for tree fruit in terms of sales and generate in excess of $800 million in annual economic activity for the “Mitten State,” according to Belding, MI-based marketer, BelleHarvest Sales, Inc. 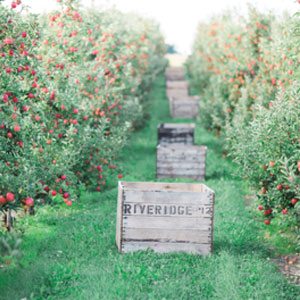 Michigan’s 9.2 million apple trees make it the third largest apple producing state in the country, according to Lansing, MI-based Michigan Apple Committee. There’s a simple reason for this. They taste great. Michigan apples are sweet, crisp, juicy and available fresh every fall. Not only do Michigan varieties have a great flavor profile, they also enjoy a high profile as a locally grown commodity throughout the Midwest, and the health benefits of apples have been firmly established.

“Michigan still grows the best-tasting Honeycrisp, Fuji, and Jonagold, according to our consumer research,” says Diane Smith, executive director of the Michigan Apple Committee. This preference for Michigan apples is reflected in the focus groups the committee conducted in the fall of 2015. Consumers in Schaumburg, IL, and Troy, MI, ranked Michigan Honeycrisp at No. 1, and both groups placed the Michigan Fuji and Michigan Jonagold varieties in the Top 5.

The apples used in the group were purchased from retailers within 50 miles of the testing site and within 24 hours prior to the tasting. Half of the apples were purchased bagged, and the other half were packaged in trays. The tests revealed what many already know about Michigan apples: they taste great. Participants enjoyed the balance of sweet and tart, the crunch and juiciness as well as the smell, look and texture. “Because of Michigan’s unique climate and geography, we have ideal conditions for growing apples,” says Smith. “Plenty of sun, moisture, proximity to the Great Lakes, and nutrient-rich soil — all these factors contribute to superior flavor.” Smith also credits the state’s apple growers for their hard work in apple cultivation.

“For folks who haven’t eaten Michigan apples with regularity, we want to try to encourage them to seek them out, because they will have a better eating experience.”

Chris Sandwick, vice president of sales and marketing for BelleHarvest Sales, also credits climate for the success of the fruit. “For apples that are grown in Michigan, one of the great things we have going for us is the climate. We have a real diversity in our temperatures throughout the year, which promotes flavor development. We grow really high-flavor apples here. For folks who haven’t eaten Michigan apples with regularity, we want to try to encourage them to seek them out, because they will have a better eating experience.”

All signs indicate the 2016 season will be a good one for Michigan’s apple crop. A warm summer is a major contributing factor. “I expect the Michigan crop to be around 20 percent larger than last year,” says Scott Swindeman, vice president, All Fresh GPS based in Sparta, MI. “It very well could be the largest fresh apple crop in the state’s history.”

According to Tom Labbe, domestic sales manager for Jack Brown Produce based in Sparta, MI, the 2016 crop won’t be notable simply for its size. “Not only will the crop be larger than recent years,” he says, “it’s shaping up to be a better quality crop as well. We had a few scares there where the temperature went below where we wanted it to, but it never really maintained a low temperature.”

Sandwick also anticipates a good crop of apples this year. “Mother Nature has been kind to us,” he says. “We should have a similar crop to last year in volume, but our mix continues to evolve. We’ll have a few less of the older varieties, and more Gala, Fuji, and HoneyCrisp. Those three varieties really represent the new backbone for our business.”

Don Armock, president, Riveridge Produce Marketing based in Sparta, MI notes the warm summer’s effect on the 2016 crop. “We had a much warmer summer than we’ve seen, certainly in the past two growing seasons,” says Armock. “That [factor] played into making our individual fruit size a little bigger, and the crop size a little bigger. We have bigger crops of Honeycrisp, Gala, Fuji and Jonagold.”

In addition to old favorites, new ones were added to the mix. Matt Thiede, partner at All Fresh GPS, explains, “Over the past five years there has been a large investment in new plantings with a focus on the big three varieties (Gala, Fuji, and Honeycrisp), resulting in Gala production outpacing Red Delicious. Additionally, many growers are making investments in early strains of Pink Lady and EverCrisp, and select growers are planting managed varieties like SweeTango, Kiku, and Kanzi.

With so many varieties to choose from, there is confusion on the part of some consumers regarding which variety offers what taste. Riveridge’s Armock attributes consumer decisions to their age and where they grew up.

“People make decisions on varieties based on what they were brought up eating, and when they start making their first choices as they move out of the house; playing to those customers’ preferences is very important,” he says.

The inability for consumers to distinguish between varieties means display will be the primary driver in decision-making. According to Armock, “There are people who are probably a bit more interested in trying different taste profiles. There are a lot of people who look at store displays and don’t know one from the other, because it’s very difficult to differentiate, so they make a decision on what looks good at the moment.”

Attractive bulk displays remain a preferred method of display to get apples from bushel baskets to shopping baskets. Smith at the Michigan Apple Committee explains how social media is playing a part in marketing as well. “We are working on some fun social media ideas to educate consumers about identifying Michigan Apples in the marketplace. We are emphasizing the themes of flavor, and of course, the health benefits of apples.”

The committee found social media to be a highly effective tool for reaching target audiences and to get them talking about Michigan Apples. “It’s such a great tradition in our state,” says Smith. “People get really excited about the new fall crop each year.”

The fall apple crop doesn’t just appeal to Michiganders. Local means different things to different people, but for apples, Michigan is considered the backyard for many of the surrounding Midwest states from Minnesota and Iowa, to Illinois and Indiana.

“What we found regarding local is apples have a broader definition, and regional is probably a better way to categorize local,” says Sandwick of BelleHarvest. “We’re regionally relevant for quite a few states up here. Origin in food is certainly something that is increasingly important to folks, so we always try to help our retail partners put Michigan on the displays, and I think we’re seeing more folks who are willing to do that as their customers care more about where their food is coming from.”

Calling out Michigan as the source of apples is a great way to boost sales. “Locally grown has been a big driver,” says Armock of Riveridge, “but I’d say within a seven or eight state area, we’re recognized as the locally or regionally grown varieties, but we market well outside of those boundaries”

“Locally grown has been a big driver, but I’d say within a seven or eight state area, we’re recognized as the locally or regionally grown varieties, but we market well outside of those boundaries.”

Thiede at All Fresh recommends retailers emphasize local as well, saying, “Michigan has a strong position as the local apple in the upper Midwest.” Thiede suggests produce executives: “Distinguish Michigan’s quality differences from other states (e.g. crispness, juiciness, and hardness), capitalize on local, and take advantage of the vast offering of varieties grown in the state.”

Jack Brown’s Labbe also recommends retailers take advantage of the already large following Michigan apples throughout the Midwest. “People understand the quality of a Michigan apple, so I think just utilize the message of Michigan freshness every day everywhere. It says everything. We’re known for a lot of our commodities up here, but people know they’ll always have a great taste profile whenever they pick up a Michigan apple.”

In terms of display, “bulk is still the primary driver,” says Sandwick. “We grow big, beautiful apples that display best bulk on the shelf, but we’ve seen the growth of the stand-up pouch with a grab-and-go handle that — when displayed properly — gives a little more billboard space. For these newer varieties, we have an opportunity to grab the consumer’s eye.”

BelleHarvest offers retailers secondary displays to hold a case of apples in pouch bags, which can be set up in the candy aisle, with chips, or near the registers to promote healthier eating throughout the store.

Space is limited and highly coveted, so gaining more for produce is always a struggle as packaged goods dominate. “It’s not an easy battle,” admits Sandwick, but Michigan’s apple growers will continue to fight for it.