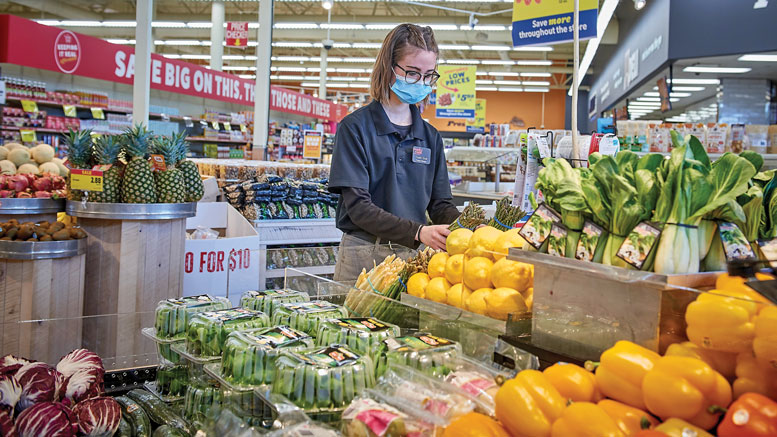 As Michigan’s produce harvest begins, retailers can promote fresh, local flavor and save on transportation.

Michigan’s product diversity and proximity to major markets offer retailers abundant opportunity in produce.
With more than 300 commodities produced, Michigan ranks second, after California, as the most agriculturally diverse state in the U.S., according to the Michigan Department of Agriculture & Rural Development.

“You see that crop diversity on full display in our local stores,” says Vic Savanello, regional vice president, produce and floral, at SpartanNash in Grand Rapids, MI, which operates more than 150 stores. “We love local produce because it reduces food miles and improves quality, but most importantly, it appeals to our store guests’ growing appetite for local products.”

The local aspect offers opportunities for both Michigan area buyers and growers. It’s a fresher product, with fewer food miles than western and southern growing areas so freight cost is less as well, says Brian Coates, vice president for sales and business development at Applewood Fresh Growers in Sparta, MI.

Customers in Hollywood Markets’ five stores look forward to the local crops because of that freshness, according to Jeff Schultz, produce supervisor in Troy, MI.

“One of the main benefits to purchasing Michigan produce is how fast we get it from the field to our stores — sometimes even the same day,” he says. “It’s picked in the morning and on the shelf by afternoon.”

In 2020, Michigan ranked first in the U.S. in the production of 12 commodities, including asparagus, cucumbers and squash, according to the U.S. Department of Agriculture’s National Agricultural Statistics Service (NASS). Michigan also ranks in the top 10 nationally in 20 commodities, including apples, snap beans, blueberries, pumpkins, bell peppers, cabbage, potatoes and peaches.

Trish Taylor, marketing manager at Riveridge Produce Marketing in Sparta, MI, suggests Michigan may be a source produce buyers overlook. “For instance, asparagus may be coming from Peru and Mexico, but it’s prime time for Michigan,” she says. “Sweet cherries are known out of the West Coast, but come summer, Michigan is a great option for fresh sweet cherries — available around the Fourth of July.”

Michigan asparagus is available from mid-May through June, depending on weather, and blueberries run from late June to early September, according to Sarah Quackenbush, account manager at North Bay Produce in Traverse City, MI.

SpartanNash has also partnered with Revolution Farms since 2018 to provide fresh, sustainable lettuce and greens for store guests throughout Michigan. “Revolution Farms lettuce goes from farm to store in one or two days, providing fresh, local produce with a reduced environmental footprint,” says Savanello.

Although Michigan is one of the leading growers of tart cherries in the U.S., Schultz says the state’s growers have started harvesting more sweet varieties. “The last two years have seen tremendous growth with sweet cherries out of Traverse City,” he says. “When the crop starts in mid-summer, we will switch over to mostly selling Michigan cherries.”

Miedema Produce Inc. in Hudsonville, MI, produces red radishes. “It’s what we started out with in 1971 and is still our hallmark item,” says Todd Miedema, co-owner.

The grower also raises other root crops, such as parsnips, carrots, beets and turnips, and carries a full line of mixed vegetables in season, and onions. “There’s always the nuance of what items start when,” Miedema says, “but the main heavy season is June through the end of November.”

Miedema Produce has also developed value-added items for the consumer. “Instead of just regular round radishes, we offer radish sticks and radish chips,” says Miedema. “These are easy to use, with no product waste for the consumer.”

In Michigan, family-run orchards dominate apple production, explains Antonia Mascari, vice president of marketing at Applewood Fresh Growers. “Orchards have been passed down from generation to generation,” she says. “One hundred years ago, these families grew out-of-the-ordinary varieties that they are likely to still grow today.”

Savanello believes in the uniqueness of Michigan fresh fruits and vegetables because the growers are multi-generational farms with decades of experience. “They know the soil and weather and how to get the best out of their fields,” he says. “They have also kept up with the times and utilize state-of-the-art technology to assist in the growing, harvesting and sorting/packing.”

In SpartanNash’s company-owned stores, local growers are highlighted with signage throughout the produce departments, so store guests can see exactly who grows it. “For example, we highlight that Miedema Produce sweet corn and green cabbage can be purchased at our stores,” says Savanello. “It’s been a hit with shoppers due to the quality and the local ties.”

SpartanNash banner stores have a page on their website highlighting the local products shoppers can find in-store. “The Our Thing: Michigan Things page features an interactive map of our local partners, as well as links to their websites, so our store guests can learn more about where their food comes from and the story of who grows it,” explains Savanello.

Hollywood Markets highlights the Michigan origin on all ads and signs, and creates a special two-week ad each year in the first part of August that features everything from Michigan, says Schultz. “We even list which farm we are getting the items from.”

SAVE MONEY, BUT WATCH THE WEATHER

Michigan’s central U.S. location facilitates product distribution across the U.S. and the world. “Michigan is a key player in the summer domestic blueberry season, so we supply a good portion of the nation during the peak of that season,” says North Bay Produce’s Quackenbush. “We also export Michigan-grown apples all over the world.”

After local sales, the majority of Michigan produce goes to the Eastern U.S. due to economics, explains Miedema.
“The biggest economic benefit for the grower is to go east, away from the California competition,” he says. “And for Eastern buyers, it’s cheaper and faster to source from Michigan versus further west. For a buyer in Cincinnati to bring product from California is four days’ travel. From Michigan, they can order today and it’s sitting in their yard tomorrow. That provides tremendous inventory tools and really helps turn the product.”

Transportation cost savings benefit both the retail bottom line and the customer. “With interstate freight experiencing shortages, having great local options could help alleviate the demand for trucks, reduce costs for transportation and minimize the miles food is traveling,” says Savanello. “These are all great things for our store guests and the environment.”

A large percentage of the population can buy fresh from Michigan within 48 hours, adds Miedema. “Since we’re closer to market, transportation cost is less,” he says. “Right now, trucks from Arizona to Michigan are running $7,000. So buying from Michigan allows you to reduce carbon footprint and save money in transportation.”

However, Michigan’s favorable location can suffer from the weather and its effect on growing seasons. “The start and end of certain seasons, namely blueberries and asparagus, is often very unpredictable,” says Quackenbush. “The only option is to be flexible.”

Applewood Fresh Growers’ Coates agrees Michigan’s weather can be more unpredictable than in other growing areas. “The timing can be tough,” he says. “When it will start and when it will finish can be a big challenge — primarily on vegetable items.”

“We have shorter seasons so we need to make the most of what we get during that time,” says Miedema, adding retailers can help support Michigan growers by staying flexible. “The greatest advantage is when we can tell our retail partners that we’ll have a lot of a product and they can pivot to move it. They can really capitalize on an opportunity to move more tonnage, put a value for the consumers, and help the grower move product and get a good revenue stream. This especially helps our local growers.”

Last fall, for example, North Bay Produce teamed up with the Michigan Apple Committee and a retail partner to promote Michigan-grown apples in the Chicago area with great success.

SpartanNash also partners with the Michigan Apple Committee. “They help us create awareness about the available varieties and their many uses, so our shoppers can quickly identify which apples to use for pies, salads and snacking, or discover their new favorite variety,” says Savanello.

Hollywood Markets works closely with the Michigan Apple Committee throughout the season, too. “The last two years we have done a giveaway promotion of a Candy Apple Red KitchenAid mixer through our social media accounts for one of our lucky customers,” says Schultz. “We did the giveaway during one of our many Michigan Honeycrisp ads, with customers posting their favorite Honeycrisp recipe to get an entry in the contest. With the help of the Michigan Apple Committee, we advertise some type of Michigan apple just about every week in the fall.”

On the individual company side, Miedema Produce works with retailers or foodservice to create promotions. “Generally, it’s promotion pricing, holiday pricing and advertising,” says Miedema. The company’s Facebook page and website provide information and interaction with consumers as well.

Applewood tailors full marketing programs to help retailers propel apple sales.“It’s our job to help our retail customers educate the end consumer,” says Mascari, “so it’s important to focus on B2C marketing just as much as we market to our B2B customers.”

One example is Applewood’s partnership with The Produce Moms. Together, in a co-branded partnership, they’re targeting consumers with new re-sealable, travel-ready bags, says Mascari. They’ve also just launched a blog and recipes to highlight apples during the summer.

Education is another key component of marketing Michigan produce. For example, with so many varieties of apples, it’s important to educate consumers on newer varieties they might not be familiar with, says Applewood’s Mascari.

Retailers are encouraged to use resources from marketers and organizations to reach their customers. “Use our marketing tools, along with our co-branded kids’ program partner — The Produce Moms,” says Mascari. “Retailers can also use all of our videos, recipes and signage created with the top industry influencers.”

Though Michigan produce is seasonal, some products such as apples, roots and cider are available nearly year-round. “Retailers can leverage the Michigan brand year-round so that when other produce becomes available, by instinct, consumers know it will be great quality and flavorful,” says Riveridge’s Taylor.