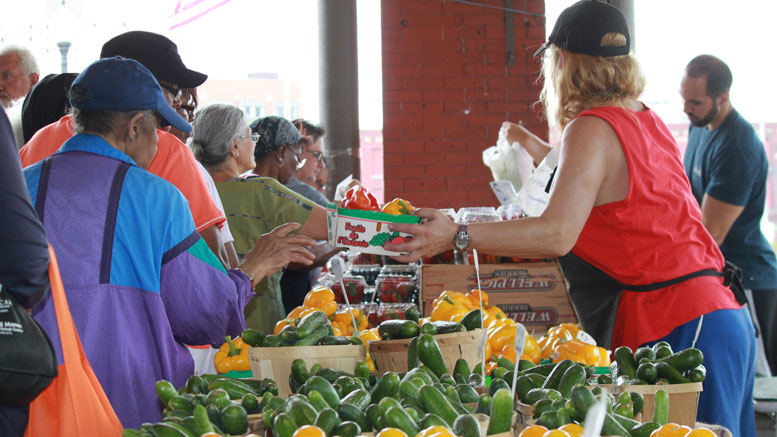 Eastern Market in Detroit may be more widely known as a consumer produce market on Tuesdays and Saturdays, but the vast majority of product volume moving through the historic facility comes from the wholesale business
PHOTO COURTESY OF EASTERN MARKET

The Great Lakes state offers rich diversity of produce, and a local connection to growers.

A state where the state flower is the apple blossom knows its fruits and vegetables. Michigan’s geography brings weather that is ideal for producing fresh fruits and vegetables for five months through the middle of each year — bounty that is a diverse, as well as significant, volume.

According to the latest U.S. Department of Agriculture (USDA) statistics for state production rankings, Michigan is seventh for most fruits and vegetables. Michigan’s fresh market apples are valued at $128.4 million. USDA statistics indicate Michigan fresh blueberries have a commercial value of $53.4 million. Fresh green peppers, cherries, cucumbers, cabbage, squash and pumpkins all weigh in at $15 million, or more.

Among Michigan’s many strong produce shippers is North Bay Produce, just outside of Traverse City, MI. In the berry category, North Bay will be shipping blueberries from June 25 through Oct.1. “Our blueberry volume is growing, and newer varieties are being planted,” says Ryan Lockman, vice president of sales and commodities. The firm’s Michigan raspberry deal runs from Sept. 5 until Oct. 5, and North Bay’s raspberry volume is also growing.

This year, North Bay helps customers merchandise berries with new, top-seal packaging, Lockman says. The top-seal packaging “has been well received by retailers and they are excited to see it rolled out over the next few months.”

This new offering has up to 30% less plastic than traditional clamshells, and a resealable top that prevents spillage at the stores. “We have been consistently promoting the new packaging on social media to get consumers buzzing about our new look and benefits.”

“For promotions, we can partner with stores to offer regional promotions like radio, billboard, and targeted TV advertising for key commodities during our heaviest harvest times, all the way down to doing demos or giveaways for independent store groups,” Lockman adds. “We have a great presence on social media and can utilize influencers to help build a consumer story to get them into your stores. In the end, we work with our customers to develop a merchandising and promotional plan that benefits both parties.”

Beyond berries, North Bay ships asparagus from April 25 until June 25. Fresh plums are a late summer deal, running from Sept. 5 to Oct. 5.

Dried fruit, which is seeing an increased volume, is shipped year-round by North Bay, as are the company’s apples. This apple volume is growing, Lockman says, and newer varieties are being planted.

In the field this year, Michigan had a late spring. “However, that gave us a frost-free spring, which we needed. The only thing negative about that is it puts us behind an average start date.”

As to selling Michigan items, Loupée notes, “Our objective is to help our customers meet the demands of consumers at the store level. We have a vested interest in understanding when local Michigan product is coming available and communicating that information to our retail customers so that they can maximize volume throughput. We encourage them to promote through local Michigan advertising as much as possible.”

Of Schwartz’s total sales, 70% is to retailers, with foodservice buyers taking about 30% of the distributor’s volume.

Loupée said Schwartz’s distribution reach “has gotten significantly larger over the past seven to eight years. We deliver as far south as Atlanta/Houston, as far east as New Hampshire/Virginia, and as far west as Iowa/Wisconsin. We’ve also become a supplier of significant volume into the Ontario market and have become experts in cross-border operations. Of course, Detroit is still our home, but our delivery radius is well beyond that.”

In Livonia, MI, Tom Barkulis, produce merchandiser for Larry’s Foodland, stresses the sale of Michigan produce is impactful for his retail store. “It is important, because it helps local farmers, and people like homegrown.”

Barkulis uses signage to indicate Michigan-grown, and at the peak of the deal, he runs a full-page ad featuring 12 Michigan items. Larry’s advertises Michigan sweet corn four times per summer.

A for-profit organization boosting Michigan-grown food sales is Taste the Local Difference (TLD), based in Traverse City. Emma Beauchamp, communications manager for TLD, describes Taste the Local Difference as a local food marketing agency and the company’s website, www.localdifference.org, shows a long array of customers — producers, restaurants, local, family-owned retail chains and even breweries and wineries. Working through a variety of print and online media, TLD targets consumers looking to engage with Michigan’s local food economy and other locally owned businesses. Importantly, it also links the Michigan food industry through internal networking. Building strength through cooperation allows local companies to compete with larger companies, Beauchamp observes. Among the benefits is a platform to competitors’ engagement in meetings of the mind to the benefit of all.

Beauchamp says, “We are moving toward more value chain coordination and B-to-B.” She adds TLD services include helping members create their own website and set up e-commerce services, and TLD is involved in “coaching” consumers to support locally produced foods, which provide benefits to the Michigan economy, the environment and personal health.

Three years ago, Henry DeBlouw V, a Michigan produce veteran, created Butch’s Best, and is chief executive of the company, which remains involved in Michigan and growers in other Midwestern states, while also working with California produce distribution from Los Angeles. His own Michigan farm is in oats as he transitions to organic vegetable production in 2023, but he is helping allied growers produce a variety of vegetables, including cabbage, potatoes and a full line of hard squash and pumpkins.

He notes that 2022 is a difficult year to be a grower, because of the escalated cost of all inputs, starting with fertilizer, and including bins and seed. By DeBlouw’s estimation, Michigan production volume this season will decline about 10%, as growers are more conservative due to the cost of production.

DeBlouw notes growers must start receiving higher prices — such as $5 or $10 more per pumpkin bin — to maintain sustainable businesses. “If they can’t recoup their costs, we’ll see more farms close.”

This year, he says, people will stay in business, but by next year, banks will become tougher and difficult business decisions will be pressed. He adds that if only the strongest growers survive, then they will control the market and buyers will be forced into higher prices.

In his work with independent growers, DeBlouw tries to pay as much as he can, because “as soon as everyone else tells you what the price needs to be, you’re going to put people out of business.”

Butch’s Best will begin shipping Michigan zucchini June 20, which is a couple of weeks behind schedule, due to rain. Eastern Michigan growers work on clay loam soils, as opposed to the sandy soils of western Michigan, which drain better, and won’t be so far behind a normal schedule.

Playing a unique role in Michigan’s produce industry is Detroit’s Eastern Market, created in 1890, to operate as a wholesale terminal market. The facility was built to accommodate horse-drawn carriages as Michigan farmers brought fruits and vegetables into populous Detroit for sale to independent grocers.

Seng says Eastern Market may be more widely known for its role on Tuesdays and Saturdays, during normal shopping hours, as a consumer market for fresh Michigan produce. But the vast majority of product volume moving through the historic facility comes from the wholesale business.

Michigan growers deliver to Eastern Market through a five-month growing season, a limited calendar not without its challenges, particularly as market supporters consider building new, modern infrastructure. This will include not only trailer-height loading docks, but accommodate value-added facilities for freezing or otherwise processing Michigan produce on-site. Expansion will come with a business plan to operate 12 months a year.

The Eastern Market Partnership is owned by the city of Detroit. Expansion has long been considered, but the importance of the market to Detroit society became clear during the COVID-19 pandemic. When grocery stores ran out of fruits and vegetables, cars would line up for blocks, as consumers waited their turn to shop Eastern Market.

This experience proved to many the importance of not only maintaining, but expanding, the business to help Michigan farmers serve metro Detroit’s 4.3 million people.