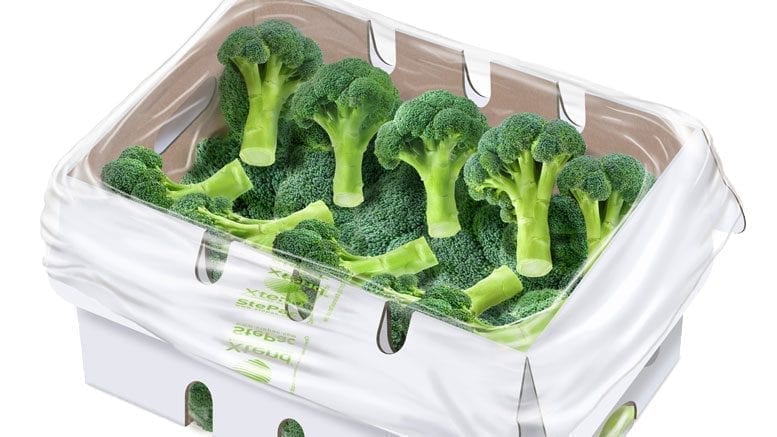 In layman’s terms, MAP is just about changing the compositions of gases like carbon dioxide and oxygen that interact with a produce item in the best way possible to extend shelf life and maintain quality.

But if that technology were really so simple as poking a few random holes in a bag, Curation Foods – formerly known as Apio – would not be what it is today.

Developed by Curation’s parent company, Landec Corporation, the sophisticated Breatheway technology is best known through its use in Eat Smart salad lines that have made the group a leader in the fresh-cut-vegetable processing.

The innovation has spread into other areas as well – extending the shelf life of ripened Chiquita bananas and avocados, Windset Farms’ cucumbers, peppers and tomatoes, and more recently Driscoll’s raspberries through the use of MAP pallet covers.

“With our technology, we can very selectively control the permeability of a package,” says Singh, whose range of films could be likened to an optometrist’s set of lenses, finding just the right fit for the customer’s vision. “We have different membranes that allow us to achieve different levels of beneficial atmospheres. We can customize a solution to provide the most beneficial atmosphere and we can design something very specific to a particular variety and its traits.”

But MAP is not a uniform idea. It comes in multiple forms, and the companies specializing in the technology all have something different to offer. Solutions will vary depending on the commodity concerned.

“When you use modified atmosphere packaging, what you want is to change the gas compositions surrounding the product in order to extend its shelf life,” says Eva Almenar, Ph.D, an associate professor at Michigan State University’s School of Packaging. “When you increase the amount of carbon dioxide, you can kill microbes, however not every single fruit or vegetable tolerates high amounts of carbon dioxide.”

Almenar also highlights what is probably the most important distinction in any discussion of modified atmosphere – passive versus active MAP.

“In the case of leafy greens, what they do with active MAP is they flush nitrogen in a way that the final gas composition inside the package is a little bit below 1% oxygen,” she says. “Then you have passive MAP, and that is when the fruit or vegetable itself is going to change the packaging space just because it’s taking oxygen and it’s producing carbon dioxide.”

Passive MAP is often achieved through a series of miniscule micro-perforations that can match the respiration rate of the product inside to target specific gas compositions.

Netherlands-based PerfoTec is a major global player when it comes to this type of MAP, harnessing its in-line laser to fine tune the number and size of these holes that are invisible to the human eye.

“Communicating with the retailer’s supplier, we will start by monitoring the respiration rate of the produce, which can vary by season, variety and growing location,” says Shannon Reinhard, the company’s commercial director. “This is accomplished using PerfoTec’s Fast Respiration Meter, or FRM, which measures the respiration rate in only four hours with automated data transfer to our software.”

The information is then combined with other variables such as product weight, film-transmission rate and package dimensions.

“Then, with the additional information of target oxygen level, shelf life and supply chain temperature, our software will determine the number and size of micro-perforations that are needed for that particular respiration rate,” says Reinhard.

These all form part of a passive MAP approach, but PerfoTec provides the added flexibility for customers to take the step up to active MAP.

“The PerfoTecO2Control is a precise gas-flushing system, which has sensors to ensure accuracy and consistency of the gas levels required for the specific type of produce,” she says. “This is especially significant in the packaged-salad industry where accurate gas levels are particularly critical.”

Curation’s Breatheaway MAP is different altogether. Instead of micro-perforations, it has polymer membranes that react to temperature changes to trigger alterations in the fruit or vegetable’s breathing.

“There is a technology that compensates for a temperature switch – if retailers have supply chain temperature issues, if they want to lower their shrink and food wastage, Breatheway is a natural solution,” says Singh. “We don’t add chemicals, and we don’t inject anything. It’s a natural way to control any atmosphere in a bag, and that is beneficial for anybody.”

“We work with a lot of customers that sell into the retailers, and we work with retailers like Walmart and Costco.”

APPLICATIONS AT THE SOURCE

While many retailers in the United States have their own fresh-cut operations at the back of store or use regional processors, some suppliers, such as Salinas, CA-based Church Brothers Farms prepare the products using MAP at the source.

Alejandro Tomas Callejas, Church Brothers’ director of research and development, says the company predominantly caters to foodservice but has around 15% of its product going to retail.

“Having a proper modified atmosphere is helping us to extend shelf life and alleviate any postharvest quality issues that we may have due to oxidation or pinking in Romaine lettuce,” says Callejas. “We have internal capabilities to measure the respiration rate of produce, and that’s our starting point.

“The next step is basically to start defining the film that we will be using. We select a couple of films and then go through a couple of trial and error exercises to see how that specific film will impact the quality and shelf life of the product.”

Church Brothers uses both active and passive MAP depending on the product, but Callejas explains using an active approach with a nitrogen flush is not appropriate for high-respiring items.

“Normally we don’t use active modified atmosphere for those items, for example spinach or baby kale or arugula,” he says. “Active is more expensive than passive because you have to add the nitrogen flush, and that’s a cost you are adding to your process.”

But the added cost is worth it for some items, which Callejas says would not be successful without active MAP.

“For example, chopped Romaine lettuce is an item that is pretty sensitive to oxidation, so you need a low oxidation level right after cutting the product,” he says. “Only a nitrogen flush or active MAP before sealing is going to give you that.”

With its origins in Israel’s Volcani Center agricultural research organization, StePac is another key provider of MAP solutions to retailers, marketers and growers. In 2015, it was acquired by the UK’s Johnson Matthey Investments from DS Smith for $21.5 million.

“In addition to that, we use smart polymers that manage the humidity inside the packaging, avoiding dehydration and shriveling on the one hand, but also reducing excess humidity and condensation on the other hand,” says Soldi. “StePac offers retailers a wider range of packaging solutions with modified atmosphere or modified humidity properties in different packaging formats for different produce items and applications.”

The company’s Xgo technology is applied in standing pouches for shelf life-sensitive products such as organic Persian cucumbers, Brussels sprouts and green asparagus.

“It’s cleverly engineered to provide extended shelf life in a convenient, attractive grab-and-go retail-packaging format with Ziplock, excellent film clarity and condensation control,” he says. “Xgo top seal can be customized for different types of produce packed in PET or PP trays, and it is available as both easy peel (for PET and PP trays) and resealable (for PET trays only).”

He emphasizes StePac packaging not only extends the shelf life and freshness of fruits and vegetables, but it also preserves the nutritional value.

He adds it is difficult to estimate how much produce is being shipped using MAP since there is very little tracking data available for it, but his company’s indicators suggest 30% of all bulk bell pepper shipments crossing the border from Mexico are using it.

Microwave-ability is an increasing trend in fresh-cut produce with Tomas Callejas of Church Brothers, noting it is most often used for cut vegetables such as cauliflower, broccoli, squash and sweet potatoes.

However, as noted by Eva Almenar of MSU, the bag will explode in the microwave without the right kind of holes to let out steam.

“The big steam venting holes are too large to regulate the atmosphere inside the package,” she says.

But Reinhard is noticing a change in packaging design as ready, microwaveable meals are kept best at specific oxygen levels too.

“Nowadays, we see clever packs with steam venting holes covered by a sticker. This sticker lets go when the package is put into the microwave for preparation,” she says. “Therefore, our laser systems can be used for those packs too.”

Callejas is also looking into the possibility of adopting films with anti-microbial properties, as well as options with more sustainable plastics and edible coatings that create a modified atmosphere on the fruit or vegetable itself.

A prime example of the latter is Apeel Sciences, headquartered in Goleta, CA.

“For produce specifically, Apeel’s technology creates an optimal microclimate inside every fruit or vegetable, maintaining quality, reducing shrink and extending shelf life,” says Erich Klawuhn, the company’s vice president of product. “It also reduces the reliance on refrigeration, plastic or a highly controlled atmosphere, which enables suppliers to get more produce from farm to retailers without having it spoil during transit.

Masek says the product is currently available for organic and conventional suppliers of avocados, oranges, mandarins, limes and organic apples, while the team is working quickly on making it available for application across a wide range of fresh-produce categories.

Southern Fruits And Vegetables Shine in Summer and Fall