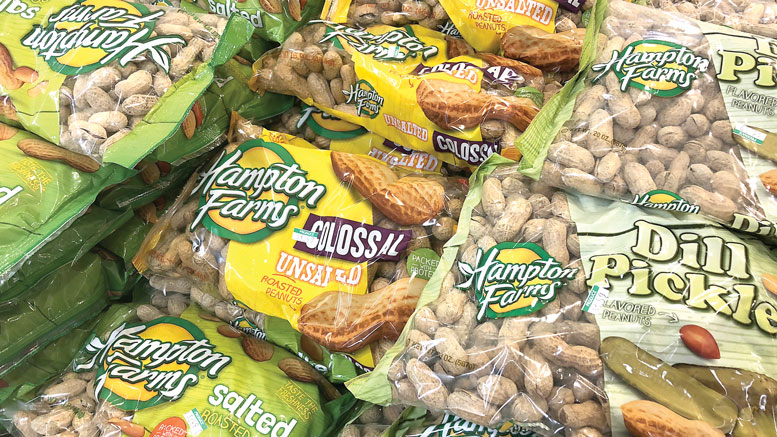 From the lens of a long-ago visit to stores in California to today’s pandemic-driven environment, the outlook on peanuts is positive.

It was many years ago, visiting stores in Los Angeles with Dick Spezzano, former vice president of produce and floral for Vons. Dick, who had run produce for Vons for many years and had gone out on his own as a consultant after working a bit for Safeway, which had bought Vons, had selected many stores to visit. We looked for retailers doing something different than the traditional chains.

The trip was heavy to ethnic retailers, as the Asian and Hispanic stores were growing fast and doing interesting things. We also went to stores focused on organic and natural. One the stores we visited was a giant Whole Foods, which was an impressive store but not doing well, and it had closed a lot of its service areas that, of course, would require many labor hours to keep operating.

What I remember well is that the store had the largest peanut display we had ever seen. This was not because it sold so many peanuts; it was because it had closed so many service areas and was not selling enough to use all its shelf space, so someone at the store had decided to fill empty display cases with this semi-perishable.

Fortunately, that was the exception that proved the rule that there is a place in produce departments for peanuts. If you go to Hampton farms’ website, you see its client list is a Who’s Who of retailers selling peanuts in the produce department — from Affiliated Foods to Weis Markets, from Albertsons to Walmart.

Over the years, we’ve reported many suggestion for boosting sales of peanuts in the produce department:

Bob Sutter, chief executive of the North Carolina Peanut Growers Association, Inc., in Nashville, NC, advised that “Spring and summer are youth baseball’s prime time. Shoppers should be reminded to pick up peanuts to take to the game.”

Chad Hartman, has moved onto Bridgewell Agribusiness, but when he was director of marketing for Tropical Foods in Charlotte, NC, he advised that retailers ought to “Make sure to have a barrel of in-shell peanuts for sports and outdoor enthusiasts, and bags of in-shell for those same shoppers. Always have shelled snack nuts, including flavored varieties, and this time of year stock raw peanuts for bakers. Make sure to have both raw Spanish peanuts and raw XL Virginia peanuts.”

Ben Fueston, national director of supermarket sales for Hampton Farms in Severn, NC, advised that retailers should focus on specific events: “Opening of the baseball season, World Series playoffs, Fourth of July and Memorial Day are all great times to promote in-shell peanuts through display.” He calls in-shell peanuts a “very nostalgic, fun, playful and healthy snack. Associating peanuts with holidays that involve generational gatherings and outdoor fun helps the consumer plan to have a real interactive snacking experience.”

Lauren Highfill Williams, now director of communications at the National Peanut Board, pointed to 10 peanut-specific holidays — from National Peanut Month in March to National Peanut Day in September. “Retailers can help consumers have fun with holidays with special promotions, shelf-talkers and displays promoting America’s favorite nut.”

Steve Schmid, national account manager at Old Dominion Peanut Co., Norfolk, VA, agrees the holidays are one of the best times for peanut promotion. He says fresh peanuts sell well next to flavored nuts, such as the company’s Burnt Sugar Pecans, Toasted Honey Cashews, Butter Toffee Peanuts and Peanut Squares. “The holidays are great for us,” says Schmid. “Peanuts do especially well at Christmas, Easter, back-to-school, as well as the patriotic holidays.” He says party trays incorporating peanuts also sell well. “It’s a healthy option to snack on while you’re socializing.

Keegan Treadaway, marketing and communications coordinator for the National Peanut Board, headquartered in Atlanta, suggested holiday displays as well as sporting promotions and general year-round efforts to sell more peanuts. “Peanuts are something people can enjoy year-round,” says Treadaway.

Yet, we have also heard that many retailers have concerns about bulk displays of peanuts:

Charles Yeh, who has now become the produce director at Fairway Market in the New York area, once pointed out that they had stopped carrying bulk product: “We don’t carry them in bulk anymore because of kids’ allergies,” he says. “We had to stop because of complaints from shoppers.”

The absence of bulk peanuts is also a loss.

According to the American Academy of Allergy, Asthma & Immunology (AAAAI), Milwaukee, peanut allergies are common, with approximately 9 percent of kids under age 10 having some type of food allergy.

Yet, the absence of bulk peanuts is also a loss. After all, the produce department is heavily about displaying items in their natural state. Produce is the best place for peanuts because virtually all shoppers go through the produce aisle, while many consumers consciously avoid the snack food aisles. Yet retailers are also anxious to avoid too many packed goods in produce, anxious to keep the fresh and perishable nature of the department, which differentiates from the snack food aisle and similar areas in the store.

Of course, peanuts today are not limited to those of yesteryear. There is now a wide assortment of flavored peanuts — dill-flavored peanuts, tomato basil peanuts and more with both sweet and savory flavors.

The numbers aren’t all in, but the expectation is that during these pandemic times, peanut consumption has increased. This makes sense because peanuts are a perfect snack for people to munch on during Coronavirus-driven lockdowns as they watch TV or their new streaming service.

The National Peanut Board has developed a wide range of recipes to encourage people to experiment with using peanuts in salads and many cooked dishes.

Now the industry has a powerful new advocate for peanut consumption, 2020–2025 Dietary Guidelines for Americans, as Sherry Coleman Collins, MS. RD, LD, explained while writing for National Peanut Board:

Historically, the guidelines focused on adults and children over two years old. However, this year the scientific advisory committee reviewed and made recommendations for a new subset of the population — infants and children under two, as well as pregnant and breastfeeding mothers. (Dietary Guidelines Advisory Committee, 2020) The committee recognized that early nutrition, starting before pregnancy and through the first 1,000 days of life, can have significant impacts on long-term health outcomes, including the development of food allergies.

The addition of dietary advice for maternal, breastfeeding, infant and toddler-aged Americans creates a wonderful opportunity to support positive health outcomes across the lifecycle. If widely adopted, these measures have the potential to improve health and reduce disease burden. In particular, these guidelines and the overwhelming body of evidence shows the early introduction of peanut foods and eggs has the potential to prevent tens of thousands of cases of allergies each year.

With the public authorities now encouraging parents to serve their infant children peanuts, we can expect business to increase, so make the displays large, add some literature about the new recommendations and realize that the boost of sales isn’t just to the infant. It is helping to build a new customer for life.