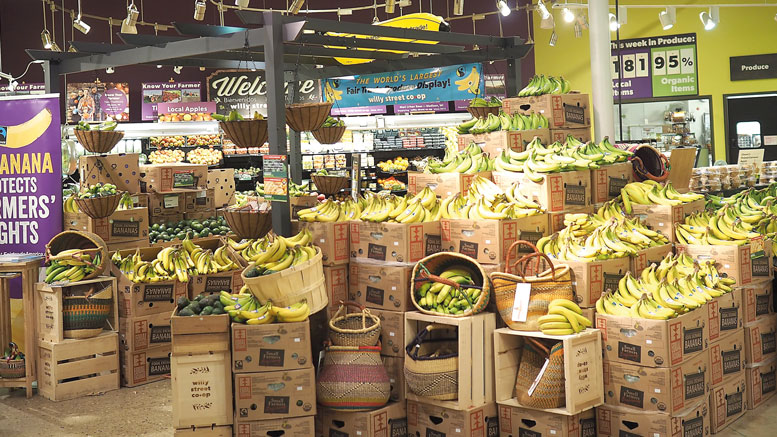 The double-digit growth of organic bananas in both volume and dollars year-over-year is largely attributed to an increase of wellness and health-minded consumers who view more naturally grown and socially-responsible products as preferable.

The banana is hands down one of the most popular fruits in the produce department. Case in point, this single SKU represented 4.7% of total produce dollar sales during the 52 weeks ending Aug. 15, 2020, according to data provided by Nielsen, a New York-based data analytics company. This tropical’s appeal extends to its organically-grown form, as well. While organic bananas represented 11% of total banana dollars based on Nielsen data, sales rose by double-digits (12.5%) over the year prior.

This compares to a 2.7% increase in the banana category overall, 5.1% for fruit sales and 7.7% for total produce sales during the same time frame. Said another way, bananas ranked as the fifth top-selling organic produce category at retail after packaged salads, apples carrots and strawberries, according to the Washington, D.C.-headquartered United Fresh Produce Association’s (UFPA) FreshFacts on Retail, Year in Review, for 2019.

The double-digit growth of organic bananas in both volume and dollars year-over-year is largely attributed to an increase of wellness and health-minded consumers who view more naturally grown products—either by prevention or treatment—as preferable, according to Bil Goldfield, director of corporate communications for the Charlotte, NC-headquartered Dole Food Co., which started its organic banana program in Honduras in 1995. Additionally, “one unique aspect of conventional banana demographics is equally true for organic: the fruit is one of the few produce items with near-universal demand across all genders, ages and life stages.”

Another factor driving consumer demand is an increase in availability. This comes from an expansion of overseas growing areas as well as the distribution of organic bananas through multiple retail channels in the U.S.

“Organic bananas for the U.S. market are mainly sourced from Ecuador, Peru, Colombia and Mexico,” says Carolina Garcia, marketing manager for Fyffes, North America, headquartered in Coral Gables, FL. “Bananas grow all year-round, with some seasonality factors due to weather and depending on if located north or south of the Ecuadorian parallel. For that reason, we diversify our countries of sourcing to always be able to meet with our customer’s demand.”

Unlike conventionally-grown bananas, Garcia adds, organic bananas require relatively dry weather to control pests and fungus diseases. While this may sound contradictory since bananas require substantial quantities of water to grow, rain causes the dispersion of pests and fungus. Since chemicals are not used, controlling production becomes much more difficult with heavy rain. Therefore, watering is compensated for by irrigation methods.

“We source 90%, over 25,000 cases, of our organic tropical fruit including Cavendish bananas from our farms and network of small growers in the Colima region of Mexico,” says Mayra Velazquez de León, president and CEO of Organics Unlimited, in San Diego, CA. “Mexico’s proximity to the U.S., only three days from the border, makes it the most local option that any produce department in America can get, allowing us to harvest-to-order and ensuring the lowest carbon footprint when it comes to bananas.”

Beyond organic, social responsibility and even greater environmental sustainability have become key factors in the banana industry. This is important too and offers retail marketing and merchandising opportunities in-store, as more consumers are concerned about where their food comes from and who grew it.

Bananas are a huge commodity with a long and sordid past, says Angelica Hicks, the banana strategic sourcing and category lead for the West Bridgewater, MA-based Oke USA Fruit Co., the produce arm of Equal Exchange, a for-profit fair trade worker-owned cooperative. “We work 100% with fair trade small farmer cooperatives. There’s the same connection between banana producers, their families and their crops in a particular locale as there is with local- grown produce here in the U.S. Most retailers have only one SKU of banana, or two if they carry conventional and organic.

“The decision on what to offer is made by retail produce buyers, so they need to be well informed,” Hicks adds. “To accomplish this, we have strong partnerships with our distributors and build direct communications between our retail customers and their consumers. In turn, we offer retailers straight forward and clear messaging about our model that can be used at point-of-sale or online such as grower interviews, articles and photos to educate their shoppers.”

Organic and being socially responsible go hand in hand. However, the organic label does not automatically signify fair trade practices, which is why it’s important to learn what’s behind a brand, according to Organics Unlimited’s Velazquez de León, whose company’s social responsibility program is called GROW. “Since 2005, through retailer and distributor support, GROW organic banana purchases have provided $2.7 million in aid. A percentage of the purchase price of each box of GROW label organic bananas goes to the GROW fund, which in turn is used for youth educational programs, health clinics, dental and vision care in Mexico; clean water and early childhood education programs in Ecuador; disaster relief and environmental initiatives including those that promote sustainability.”

“The Rainforest Alliance Certified seal indicates that our farms have been audited against rigorous certification standards that require meaningful steps toward long-term environmental, social, and economic sustainability,” says Garcia.

Social responsibility on the home front has come from Ft. Lauderdale, FL-headquartered Chiquita Brands International, according to Jamie Postell, director of sales for North America. “We have had a long-standing partnership with Feeding America, the nation’s largest domestic-hunger relief organization, along with our retailers to combat food waste and food insecurity. In 2019, 4.2 million pounds of our bananas were rescued and donated to people in need of essential nutrition. Most recently with school closures and stay at home orders due to the COVID-19 pandemic, we partnered with retailers and organizations such as schools and hospitals to donate more than 5 million bananas to communities in need.”

On the sustainability front, the Dole Food Co. is focused on decreasing its carbon footprint by ensuring new vessels that transport organic and conventional bananas to the U.S. include efficiency upgrades aimed at achieving net-zero carbon emissions at farm level by 2030. Also, the company is committed to ensuring all packaging materials used in our banana and pineapple businesses are either recyclable or compostable by 2025. For these and other reasons, Dole is spotlighting its organic bananas and pineapples through the remainder of 2020 and into 2021 with increased consumer education offerings at retail, public relations and social media activities beginning in September.

“We display conventional and organic bananas in the same area of our produce departments, but separated,” says Mike Roberts, director of produce operations for Harps Food Stores Inc., an 86-store chain headquartered in Springdale, AR, in which most customers buy conventional produce.

At New Seasons Markets, which sells most of its produce offerings in organic form, organic bananas are displayed in the back of the department. “They’re shopping list items. Customers find them no matter where we put them. When they’re in the back, they pull people into and through the department and work well in that regard,” says Fairchild.

As the pool of educated consumers committed to organic, either for everyday or occasional purchases, expands, so too does the argument for a dedicated organic set, adds Dole’s Goldfield. “We’ve found that an organic set results in larger and more frequent organic produce purchases not just for bananas but for all organic fruits and vegetables.

Secondary displays of bananas at checkout or alongside complementary products—cereal, yogurt, milk, grilled favorites during the summer and brown-bag staples during back-to-school months—work as well for organic bananas as they do for conventional, especially with the new generation of families committed to an organic lifestyle, Goldfield adds. “At certain larger retailers, organic bananas can be displayed in or near the vitamin, supplement and health food sections to reinforce the perceived wellness advantages of organic.”

The biggest challenge today and in the future in promoting organic bananas is continuing to educate buyers and consumers on the true, fair price of organic produce, says Organics Unlimited’s Velazquez de León. “This includes the additional costs associated with ensuring pesticide-free food and making sure that our organic growers are fairly compensated for the invaluable work that they do. By sharing the ‘true cost’ of food and educating consumers about what takes place prior to eating a banana, we feel energized about opportunities that exist moving forward.”