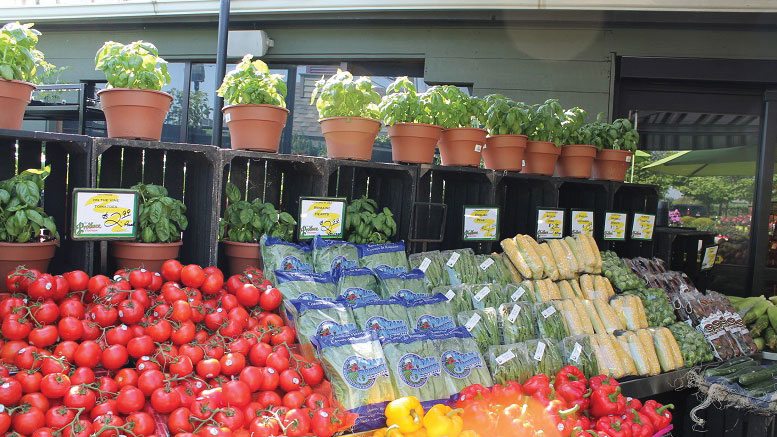 Produce Station’s 2,000 square feet of floor allows for showing off the quality of its produce. (Photo Courtesy of Produce Station)

This retailer follows a mantra for tasty fruits and veggies.

With Detroit’s ongoing revitalization, its reputation as a food dessert has begun to wane.

About a year ago, in an effort to get the community into local supermarkets, the Detroit Economic Growth Corp. (DEGC) organized the Grocery Crawl in southwest Detroit.

According to Crain’s Detroit Business, the event, said to be the first of its kind in the city, was part of the $5.3 million Green Grocer Project (GGP) funded in part by The Kresge Foundation and managed by the DEGC, which aims to improve the city’s grocery economy.

The Green Grocer Project also provided matching grants to 16 Detroit grocers to improve the appearance of stores. GGP contributed $500,000 toward the $5.3 million, which was spent on the facade improvements at the stores, according to Crain’s Detroit Business. Participating stores applied for 50/50 matching grants up to $50,000 and almost all of the stores exceeded the dollar for dollar limit. Improvements included seasonal landscaping, repaved parking lots and signs.

The area’s biggest supermarket chains are Meijer, Kroger and Spartan, but there are a number of independent retailers that are strong players.

One produce-centric independent retailer making waves in the Michigan supermarket scene is Produce Station, located 45 minutes outside the city in Ann Arbor. The business opened in 1986. Despite the name, this store is comprised of numerous departments, including an extensive produce section, which expands outside in the warmer months; a prepared foods department that also offers large-scale catering; groceries; and beer and wine.

Produce, grocery, beer, wine, flowers and plants represent 50 percent of the business, with prepared foods and catering comprising the other half. “With our produce section, the goal is to supply the best-tasting products we can,” says Dennis Pontius, Produce Station’s general manager. “Depending on the time of the year, these items may be from the Detroit Produce Terminal, but also can be sourced from anywhere in the state or Midwest.”

For example, at press time, the store just brought in squash from Indiana, and was offering apples, peaches, nectarines, blueberries and cherries from Michigan farms.

A remote and seasonal plant and flower business expands into Produce Station’s parking lot from April through September.

Prepared foods is a significant portion of the retailer’s business. It has a dedicated kitchen where meals, including salads, sandwiches and other dishes, are prepared from scratch.

Produce deemed to be not suitable for retail sale is designated for the foodservice program. And although the store offers specials on its menu, these items are typically not driven by produce or produce quality.

“Some dishes are produce-centric, as this is an integrated part of the business,” says Pontius. “Fruit and vegetable orders for retail and foodservice are made jointly.”

Much of the specials center around seasonal produce, such as apple buckle and blueberry buckle in fall. In this regard, it’s the local produce that helps drive the menu. Although Produce Station is an intimate store of about 2,000 square feet of sales space — not including the 5,000-square-foot kitchen — Pontius describes the produce section as sprawling.

“In the warmer months, we have much of our offerings outside set up around our building, similar to a farmers market setup,” he says, adding that the square footage is as much as 10,000.

Most recently, this included a 24-foot truck filled with 25 bins of pumpkins and squash, as well as 15 types of heirloom apple varieties.

Organics is not a big market for Produce Station, which is known for the freshness and quality of its product.

“Local is a really big factor, except in winter, when it’s virtually non-existent,” says Pontius. “This is when root vegetables take over.”

The store is staffed with eight personnel that are dedicated to the produce section and eight others that are engaged in these products some of the time.