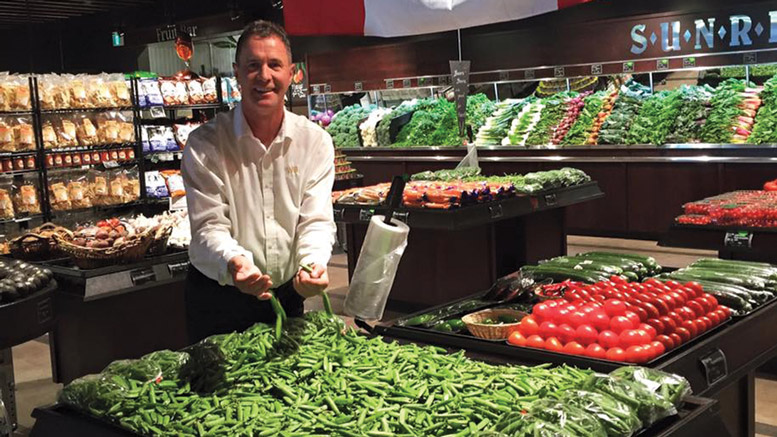 The Willemsen family goes extra mile to serve quality to its shoppers.

When customers walk into the Sunripe Freshmarket in the Hyde Park neighborhood of London, Ontario, they are greeted by a produce section and a series of panels that tell “Will’s Story.” It lists the reasons owner-buyer Will Willemsen does what he does at his three Sunripe locations southeast of Toronto.

“Why?” asks the first panel. Answer: “Growing up on a farm, I got to taste how amazing fresh produce can be. It’s my life mission to share the pleasure.”

The next panel asks and answers the second question: “How? At 2 a.m., I start shopping at the Ontario Food Terminal. I taste and select the best fruit and vegetables.” The final panel says “What? I ship the produce back to Sunripe the same day, not to a warehouse, so it’s up to seven days fresher than any supermarket.” Will’s name is at the end of each panel, as a promise that he’ll keep doing it this way.

Willemsen grew up on a farm in a small Ontario town called Blenheim. His family grew apples, strawberries and some vegetables. In 1982, with $2,000 in his pocket, Willemsen decided to open a retail grocery in Sarnia, Ontario. The name Sunripe was originally intended for Willemsen’s strawberry processing plant that never came to be. Now thriving, his 15,000-square-foot Sarnia store is getting an additional 12,000 square feet.

Two stores followed in London, Ontario – one in the Adelaide neighborhood 14 years ago and one in Hyde Park two and a half years ago. The key to Sunripe’s success, says Willemsen, is buying based on quality and passing on premium-grade produce to the customer. “I hand-select the produce three times a week, while the chain stores buy their produce over the phone. There is a big focus on quality,” says Willemsen.

DAILY ROAD TRIP WORTH IT

Willemsen was at the OFT on a Thursday, when the terminal is “the busiest hip-hop, happening place. You have to be careful you don’t get run over.”

After filling two new 53-foot trailers with fresh produce at the OFT, Willemsen takes the two-hour drive to the London stores, then another hour south to the Sarnia store.

“In 1982, I was running around, driving to every farmer — a lot more driving than this,” says Willemsen, who gets most of his produce from the wholesalers at the OFT. “Here, if one vendor doesn’t have what I want, another one will.” He enjoys catching up with other buyers at the terminal. “We share ideas and find out what’s working. I see buyers I respect, and I can see what they’re buying.”

Willemsen now has a condo in Toronto, which helps make the early-morning commute easier and less frequent. “I used to have to get up at midnight to drive here from Sarnia; now I can get up at 1:30 or 2 am.”

The routine has been the norm for 36 years. “It’s the same schedule he’s had since I was born,” says Kysa Willemsen, Will’s daughter, who is Sunripe’s marketing manager.

Sales soar in the summer, with offerings such as broccoli, grapes, peaches, plums and nectarines. When the local weather improves, he buys strawberries from area farmers, as well.

Sunripe is truly a family business. Willemsen’s wife, Ingrid, and their children are all involved: Kysa’s twin brother, Ryall, 23, eventually will take over the buying. Bubbly 17-year-old Mia instructs viewers on social media how to make dishes using fresh produce. Comfortable in front of the camera, she has created the “Mia Minute,” videos where she teaches viewers how to whip up a chocolate fondue for dipping strawberries or how to make a pizza crust from broccoli.

Kysa also can get the word out instantly, telling shoppers what produce is ripe. She photographs her parents, siblings and staff to give shoppers a personal touch.

“If we do a promotion and Kysa posts it on social media, sales can increase more than $100,000 over all three stores in a couple of days,” he says. “We get instant feedback on what [customers]. It’s a very efficient way to get a lot of info to a lot of people.”