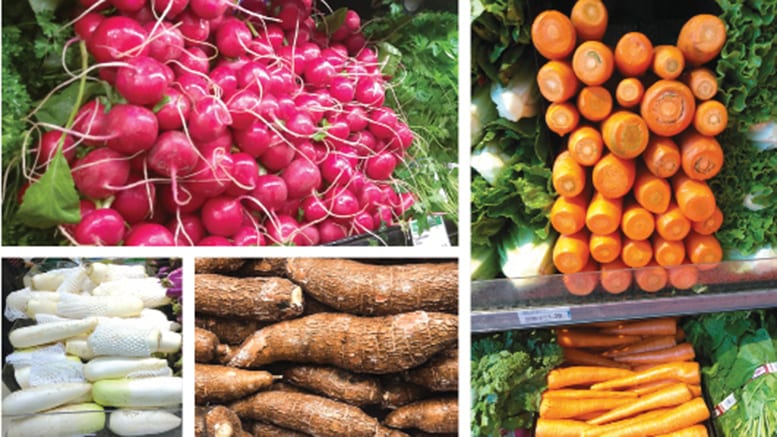 Dig a little deep, and you’ll get to the roots. And once retailers discover the flavor, versatility, and growing popularity of lesser-known root vegetables, they’re also likely to find an opportunity to increase sales of these products. There’s a built-in market of consumers who already know and love these root vegetables, and also a potential new customer base of foodies and consumers who want to eat healthier.

“Root vegetables have really moved from the slow cooker to the grill and roasting pan,” says Michael Schutt, senior category manager for produce at Raley’s, based in Sacramento, CA. “They have also migrated from side to center plate. Consumers are seeking bright colors, varied textures and loads of nutrients in their vegetables, and this category has those characteristics in spades.”

Not Your Typical Root Vegetables

Root vegetables such as carrots, potatoes and onions have been staples in kitchens for generations, but there are many other options that offer terrific taste and versatility, and they can add excitement and new flavors to the dinner table. 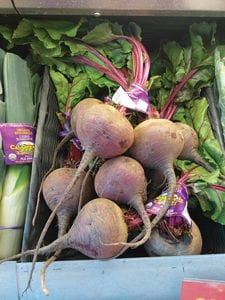 Jessie Capote is principal and executive vice president of J&C Tropicals, based in Miami. J&C is a third-generation, family-owned grower, packer and distributor of more than 65 tropical fruits and vegetables, and has farms in the Redland agricultural region, south of Miami, as well as in central South America and the Caribbean.

“If you’ve known us for the past 54 years, you’d probably say, ‘Those are the root vegetable guys, because that’s how the business was founded,’ ” says Capote. “It is our oldest and most hardcore line because we currently farm, or have farmed, all of the root vegetables in that category, and it gets pretty specialized.”

Capote says yucca root and ginger are J&C’s most mainstream root vegetables, and the company also offers many specialty veggies.

“There are tropical root vegetables that are pretty niche for Asian and Hispanic demographics,” he says.

Those include Malanga, which has three varieties: blanca, lila and eddo. There’s also Malanga coco, also known as taro root, and boniato. “That’s a Caribbean sweet potato that we grew in Cuba way back when. We brought the seed to the United States and we grow it in the Redlands,” says Capote. “That’s actually the product that founded the company.” He adds that J&C grows about 1,000 acres of boniato in the Redlands.

J&C also carries a diverse line of yams. Not the yams that are best-known in the United States, but two varieties of white yams that are grown in Colombia and Costa Rica. Also key is a yellow yam operation in Jamaica.

Chris Lindley, chief executive of Flavorful Brands, a company based in Ladera Ranch, CA, that specializes in sourcing high-quality vegetable seed and produce for the market, says lots of root vegetables are growing in popularity. These include beets because of their health benefits and parsnips because of their increased use by chefs.

“Flavorful Brands partners with Bejo Seeds to create products that result in the highest-quality produce filled with flavor for consumers who will be reintroduced to great everyday produce,” says Lindley.

Other vegetables Flavorful Brands specializes in through its partnership with Bejo Seeds are onions, shallots, radishes, rutabaga, leeks, parsnips, potatoes, fennel and celeriac.

Jeff Trickett of Bejo Seeds says many of these vegetables are traditionally popular in northern regions, where they are used during the winter when there is a lack of local vegetable production.

“Root veggies typically can be stored for quite some time, so in winter you can have veggies to eat from storage,” says Trickett.

“The overall ‘eating for a better health’ trend encompasses all vegetables and promotions about eating all the colors, and that includes red items,” says Jeff Walker of TC Marketing, Inc., headquartered in Napoleon, OH. TC Marketing is a full-service fruit and vegetable brokerage that works with farms to grow and package the Tem-Cole and Top Class radish brands.

Walker says radishes have been on an upward trend in recent years, and that’s something retailers can take advantage of.

“Make sure they are displayed alongside other staple items that are commonly associated with radishes,” he says. “Radishes are not a ‘stand-alone’ commodity. They are part of the meal, or an ingredient, if you will.”

Capote says the customer base for J&C’s root vegetables is tied to certain demographics. “I would say 20-30 years ago, they were centered around Caribbean and Hispanic customers in major cities around the country, New York, Miami and in the Northeast,” he says.

There have been changes, especially with yucca becoming more mainstream. Also important, he says, is the Asian demographic, with those customers often coming from Asian countries in tropical environments.

Raley’s Schutt says consumers who focus on plant-based diets are seeking alternatives to traditional proteins to meet their nutritional needs.

“Root vegetables offer the flavors and density to satisfy those needs,” says Schutt. “The foodservice industry has also become the proving ground for many of these lesser-known items, driving customers who typically dine out into stores looking for a turnip to add to their mashed potatoes or roasted parsnips for their artisan pizza.”

Schutt adds that Raley’s promotes root vegetables through point-of-sale materials when available and with meal solutions.

“One area where retail can succeed is by taking some of the thought process out for the customer,” he says. “A root vegetable roasting kit, for instance, with a wide variety of cut, cleaned and ready-for-the-grill options can help increase sales.”

J&C Tropical’s Capote says retailers can increase sales of root vegetables with prominent displays. “The consumers who buys these, whether they’re Hispanic or Asian, are accustomed to walking in and finding them in very large piles, not disorganized but certainly plentiful, so that it’s apparent to the eyes,” says Capote. “Some folks like certain sizes and shapes, some want to buy more, some want to buy less, so they want to see them in the aisle and take what they need. Prominently and abundantly displayed is what we encourage.”

He also suggests promotions and ads, especially during peak seasons, and displaying them near complementary items.

“Some retailers will have an entire tropical fruit and vegetable area, next to the plantains, the squash and the mangos and the avocados, so that you get the whole basket,” he says.

These steps not only appeal to shoppers who know and love these vegetables, there’s also an opportunity to draw in consumers who aren’t familiar with them, particularly foodies.

“They certainly have grown through foodservice, and chefs who will feature them on their menus,” says Capote. “We’ve done in-store demos throughout the years, and we’ve also done food shows specifically for retailers who want to educate their produce managers. We’ve provided information for recipes and demonstrations, that’s all important, and it’s ongoing. It never ends.”

Natasha Lichty, brand and marketing director for Love Beets, based in Bala Cynwyd, PA, says there are lots of great ways to promote beets, and Love Beets has merchandisers who visit retailers throughout the country in order to meet with produce managers and educate them about their products.

“Shelf-talkers and recipes are always a great way to promote beets and educate consumers,” she says. “We also have a big in-store demo program, because we know trying our products is an important first step for some people. There are always individuals who claim they don’t like beets because of a bad childhood dinner table memory, but then are incredibly shocked to find out they do actually like them now, when they try our products. We think it’s important to give customers the opportunity to change their mind.” 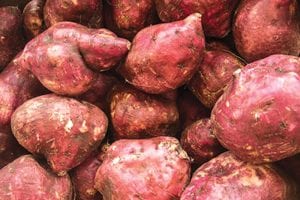 Flavorful Brands also is bullish about kohlrabi, which technically isn’t a root crop, but which Debbie Letourneau, vice-president of marketing for Flavor Brands, says can be enjoyed the same way as root vegetables.

“It is very similar, with a tuber-type head which develops above versus under the ground,” she says. “But kohlrabi has the same cooking and fresh eating qualities as classic root veggies, plus high nutrition and many interesting uses.”

“The parts of kohlrabi that are typically eaten could be compared to the stems of broccoli that are eaten,” says Mellon “The uses of kohlrabi are similar to root vegetables. This could cause confusion for consumers as vegetable uses are seen as separately from scientific definitions.

“An example would be tomatoes or cucumbers, where technically they are fruits, with seeds on the inside, but the culinary industry defines them as vegetables for cooking uses.”

Indeed, showcasing the health benefits of these root vegetables can pay dividends.

“Some of the vegetables have been credited with high levels of certain minerals,” says Capote. “Some have been prescribed by doctors if you’ve recently had ulcers or surgery in the intestines. Some of these root vegetables, particularly the malanga blanca, are prescribed when you’re coming off of some sort of gastrointestinal-type procedure, and you need something to coat the inside of those organs.”

According to Lichty, promoting beets as a vegetable that fits healthy lifestyles is a natural. “Beets are rich in various vitamins and nutrients, but the really special health benefit of beets is the nitrates that convert into nitric oxide in your body,” she says. “Nitric oxide is known as the ‘miracle molecule,’ and can help improve oxygenation of blood and muscles, circulation, heart health, stamina and endurance, and more.”

One of the well-known health benefits of root vegetables in general is that they are high in fiber and packed with nutrients.

“Radishes are no different,” says TC Marketing’s Walker. “I believe potassium is on top of the list followed closely by Vitamin C. One overlooked vitamin is folate. Radishes have their fair share of it, and pregnant or soon-to-be pregnant women need folate.” 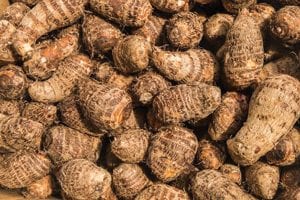 Using recipes and cooking tips is a great tool, especially if you want new consumers to try these vegetables. There are lots of ways to prepare these root vegetables, but Capote says raw isn’t among those as a rule of thumb.

“Like a potato, you can boil them,” he says. “It depends on how healthy you want them to be. The healthiest way to consume them is to boil them. Then you can mash them, or boil them and eat them as is, and garnish them with olive oil and salt and pepper. Then, of course, you can fry them. You’ll see examples of these fried in many chip mixes in certain markets.”

There are endless ways to enjoy beets, radishes and other root vegetables. The key is to encourage consumers to try them.

“I don’t really care how the consumer prepares or eats them,” says Walker. “Just as long as they are still being eaten and considered a healthy option.”

WE GOT THE BEETS

Beets aren’t exactly a rare, exotic vegetable, but the folks at Love Beets are dedicated to spreading the word about this tasty and healthy food. 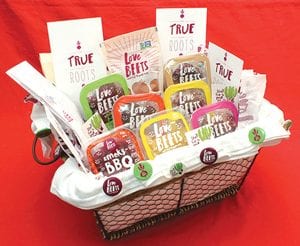 She adds that Love Beets has been “defying preconceived notions of beets with an upbeat, fun, modern brand, and tasty products that attract beet lovers and beet newbies alike.”

One of Love Beets’ newest products is a beet powder in a one-pound format for Costco.

“Different forms of beets are definitely starting to become more commonplace, which is of course extremely exciting for us,” says Lichty. “It’s clear consumers are excited by beets and want to incorporate them into their diets more, but sometimes need ‘gateway’ products to start with, like beet juices, beet chips, beet blends, etc. We also now have a golden beet product, our diced Honey + Vinegar Golden Beets, and we’re seeing a lot of red and golden beet salads on restaurant menus, so it’s fun to see golden beets become more popular, as well.”