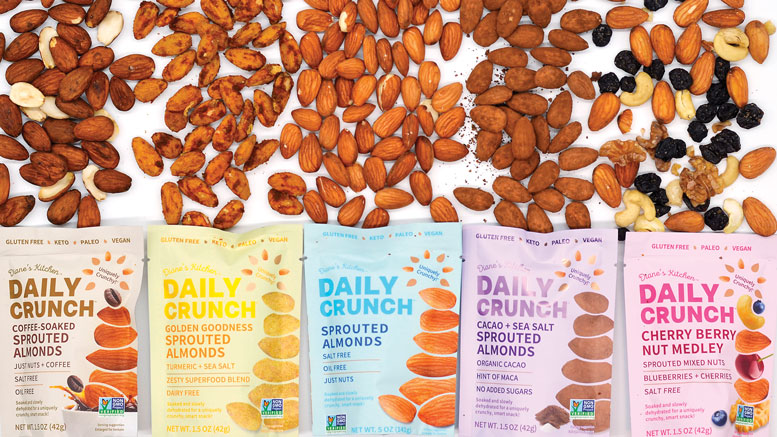 According to Dan Stephenson, co-founder and chief operating officer of Daily Crunch, sprouted almonds are the “next big thing” in packaged nuts.

These tasty, crunchy nutritional powerhouses are right at home in produce departments where customers come looking for healthful ingredients and fresh, flavorful snacks.

Originally printed in the February 2021 issue of Produce Business.

Fueled by increasing awareness of nuts’ nutritional profiles and health benefits, consumer demand for nuts has grown steadily for decades. Based on data analysis by Hamberg, Germany-based Statista, revenue in the U.S. nuts market segment is projected this year to reach $10.5 billion, with average per capita consumption standing at about 8.6 lbs.

“Placing packaged nuts in the produce department makes them an easy grab for consumers who are not covering every aisle of the store,” says Kristen Holden, senior brand manager for Mariani Nut Company in Winters, CA. “Roasted and seasoned nuts have a place in the snack aisle as well to capture a different set of shoppers — those who are looking for an indulgent snack but trying to make healthier decisions.”

“Pistachios work well as a produce item, as they’re commonly used as an ingredient in many recipes and fit right in with other highly nutritious produce,” notes Elizabeth Keenan, sales and marketing manager for Keenan Farms, Inc., based in Kettleman City, CA. “Pistachios are also a fantastic snacking item, especially with flavored in-shell and no-shell pistachios hitting the market in recent years, so many retailers find space for them in both produce as well as center store, not to mention at checkout lines.”

Focus on the Basics to Satisfy Demand

In choosing packaged nut products to stock, produce executives can satisfy most customers’ demands by focusing on favorites.

Says Holden, “For snacks, peanuts and almonds remain as the top two nut varieties. Cashews and pistachios follow, with pistachios seeing the most increase in recent years. Salted and flavored nuts are definitely important for snacks and would be recommended in the produce assortment for these top nuts.

“For ingredients, peanuts and almonds are also the top two, with walnuts and pecans following. Raw, shelled nuts are the highest in demand as ingredients.

“For produce departments hard pressed for space, the focus should be on these core varietals to capture 90% of the demand.”

“For pistachios, the essentials are a classic roasted, salted in-shell and a roasted, salted, no-shell option,” says Keenan, who recommends stocking newer varieties alongside the classics. “We’ve seen increased consumer interest and impressive growth in the flavored and no-shell pistachio categories. We’ve met that demand by carrying chili and salt-and-pepper in-shell pistachios for the past few years, as well as recently adding flavored, no-shell honey, chili and salt-and-vinegar pistachios to our offerings.”

According to a spokesperson for Los Angeles-based The Wonderful Company, “Knowing that consumers buy Wonderful Pistachios for different reasons throughout the year, including holiday gatherings, parties, sports watching, health reasons, cooking and snacking, we provide a myriad of displays throughout the produce department that address the various needs shoppers have as they navigate the aisles. We support these displays with various marketing efforts to reach shoppers before their trip to the grocery store.

“We have also launched a variety of new flavors, as we know people eat more nuts when they’re flavored. Our new BBQ and Sea Salt and Vinegar Wonderful Pistachios No Shells bring a healthy twist to the classic flavors consumers know and love, joining the Chili Roasted and Honey Roasted flavors, which launched in 2019.”

To stimulate further interest in nuts, produce executives can broaden the core selections not only with additional sweet and savory flavors, but candied, coated and dusted nut varieties as well. Chocolate and yogurt are among the more common coatings, while cocoa and cinnamon are popular for dusted products.

Because of their compatibility with ketogenic diets, a growing number of “keto-friendly” packaged nut products are becoming available, and a line of flavored sprouted almonds introduced to the snack section in June 2020 by Daily Crunch Snacks of Nashville, TN, is on its way to produce departments. “We believe sprouted almonds are the next big thing in the packaged nut section of produce,” says Dan Stephenson, Daily Crunch co-founder and chief operating officer.

“We’ve found that display innovation has been the biggest key to the nut category’s success,” says Keenan. “Displays need to communicate a clear message to the consumer, and thoughtful display placement is vital. We typically suggest a quarter pallet or some sort of stand-up display in a high traffic area — ideally at the front of the produce section — as well as dedicated shelf space near salad ingredients or other appropriate areas in produce.”

To stimulate further interest in nuts, produce executives can broaden the core selections not only with additional sweet and savory flavors, but candied, coated and dusted nut varieties as well.

To maximize merchandising, Wonderful Pistachios provides retail customers with high-graphic Wonderful Pistachios POS, including in-store display vehicles, standees, in-aisle danglers and balloons, allowing retailers to showcase eye-catching displays throughout the produce department and other areas of the store. “We find that the most impact is with multiple points of interruption, both in produce and in other high traffic areas, like the lobby and checkout areas,” says the spokesperson from Wonderful.

“In-store displays are a large driver of impulse nut purchases, both in peak nut sales periods, such as Thanksgiving and Christmas, but also during other non-traditional nut events throughout the year,” notes Holden. “For example, the California Walnut Board has worked in recent years to promote walnuts in February during American Heart Month. This program has been increasingly successful and has driven large retail sales increases during a previously slower nut sales period.”

Holden says coupling displays with cross-promotions drives further sales. “An example is pairing a seasoned almond with a fruit or cheese for a snack occasion or a salad bag with a natural nut to create a crunchy, nutritious topping. Expanding consumer awareness of opportunities to utilize nuts in their snacking and cooking can increasingly drive sales.”

In recent years, gusseted stand-up packages have become increasingly popular for packaged nuts. “While they can take up more space than traditional laydown bags,” notes Holden, “stand-up packages tend to look better on the shelf and can stand on their own, allowing for incremental placement, such as on a shelf above or below another produce item.

“Stand-up bags are usually resealable, too, which helps with ensuring product freshness and encourages consumers to grab the larger bag size.”

According to the spokesperson for Wonderful, “Stand-up packaging enables us to reach new locations and new consumers that we wouldn’t reach in the produce section. Because it stands on its own, the stand-up bag can be placed on shelves throughout the store and in areas where bin use is limited. It provides a clean, easily merchandized shelf.”

Leverage the Power of Private Label

A trend noted by both Holden and Keenan is toward increasing private label sales in the nut category. In addition to branded offerings, both their companies pack private label products.

“Private label packaging hit an all-time peak last year, with many retailers expanding their private label programs,” notes Keenan. “Consumers tend to trust stores and the products they put their own names on. The biggest key to private label success is whether or not the products are as good, if not better, than branded equivalents.”

“In the produce department specifically, consumers aren’t necessarily as focused on brand as they perhaps are in other sections of the store,” adds Holden. “Consumers are more concerned with the appearance of the product itself — ensuring that it’s fresh and high quality — and the price point.”

“Pricing definitely matters,” agrees Keenan, “which is usually the approach retailers take with their private label lines. If a store brand item is priced slightly cheaper than a national brand and the quality of the product is premium, it’s an easy choice for consumers to make.”