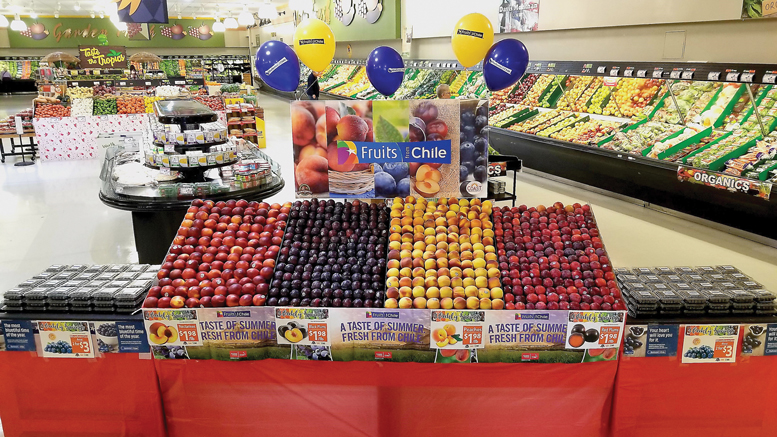 The perennial portrayal of a peach so ripely sweet that ‘the juice runs down your arm’ remains the gold standard customers seek when they shop for stone fruit. Today, advancements in producing a great eating piece of fruit are meeting this expectation and on a year-round basis. It’s no wonder that the three most popular stone fruit—peaches, plums and nectarines—collectively contributed to 3.2% of total retail fruit sales, according to Nielsen Total U.S. data for the 52 weeks ending April 11, 2020, as provided by New York-headquartered Nielsen.

“There is always a lot of excitement around summer fruit like peaches and other stone fruit,” says Randy Bohaty, produce director for B&R Stores, an 18-location chain based in Lincoln, NE, which operates under the Russ’s Markets, Super Saver, Apple Market and Save Best Foods banners.

California is the top domestic producer of stone fruit, with a season that spans from May to September. This western state supplies over half of U.S. grown peaches, with the next three producers being the East Coast states of South Carolina, Georgia and New Jersey, respectively, based on March 2019-released data from the USDA National Agricultural Statistics Service.

“For stone fruit, it looks like we are in store for a nice crop this upcoming season,” says Jeff Simonian, president of sales and marketing for the Simonian Fruit Co., in Fowler, CA. “We believe the quality, size and flavor will be excellent.”

Meanwhile, Chile is a major exporter of stone fruit into the U.S. Peaches, plums and nectarines typically start to ship in November, with promotable volumes available until March and oftentimes April.

2) SET A BUFFET OF CHOICES

The stone fruit category has expanded over the past few decades. Retailers like B&R Stores are keeping pace via a greater number of SKUs, says Bohaty. “Especially in the summer, we will carry white and yellow-fleshed peaches and nectarines, plums, pluots, plumcots, unique varieties of apricots and other specialty stone fruit varieties.”

Peaches are the king of the category, representing over half (53.8%) of dollar sales for the year ending April 11, 2020, based on Nielsen data.

“Lane peaches are our No. 1 stone fruit item in the domestic season,” says Earl McGrath, produce director for independent store Freshfields Farm, in Orlando, FL, which has a second location in Jacksonville, FL. “The flavor and value for a customer in the southeast U.S. helps give it a leg up over California fruit. That said, we carry a full line of fruit from California as well as some organics from Stemilt in Washington. We have also had success with Florida peaches before the Georgia season starts.”

Nectarines come in second, with 27.2% of category dollar sales, according to Nielsen.

“Bestsellers for us are yellow peaches and yellow nectarines. It seems to me like the traditional types of stone fruit are still the favorites,” says Simonian.

Plums round out the top three at 19% of stone fruit dollars, based on Nielsen data.

One product shoppers get excited about each year is Angelcot apricots, says Alex Berkley, director of sales at Frieda’s Specialty Produce, in Los Alamitos, CA. “This unique stone fruit variety is only in season during June. And due to its limited availability year round, we always see a lot of shopper interest in the product.”

“We’ve also developed a late-season plum, which is available from early October to December. It’s red on the outside and has a gold interior, has an outstanding flavor and is high in sugar, brixing anywhere from 17 to 25. We called it our Holiday plum and plan to grow greater volumes of this since it’s the only fresh plum on the market at this time,” says Allred.

Suppliers need to do a better job of communicating what they sell to retail personnel, especially when it comes to specialty stone fruit, says Karen Brux, the San Pedro, CA-based managing director for North America of the Chilean Fresh Fruit Association. “For example, earlier this year I saw a beautiful display of lemon plums. Shaped like a heart, they’re ready to eat when they turn red. I spoke with someone working in the produce department, and he didn’t know this. If he had told a shopper this fruit was ready to eat when it was yellow, there probably wouldn’t be a repeat purchase because the eating experience would not be great.”

Should a peach still be a peach in retail signage, given greater innovative breeding in the stone fruit category, or will varietal names become essential to maximizing merchandising? Growers say it will be a bit of both.

On one hand, “I think it is best to merchandise as yellow peaches, yellow nectarines, etc.,” says Simonian. “The marketability of each variety is only two to three weeks at a time, so I feel it would create more confusion if they are sold by variety.”

On the other hand, “It’s advantageous to call a piece of fruit by variety if there is a differentiator or something that makes it stand out. For example, something like our Sierra Honey Pluots. We work with retailers on ads, both in store and online coupons, and point of sale to educate shoppers about what’s behind the name,” adds Kingsburg Orchards’ Allred.

Stone fruit may be sold bulk, bagged or packaged in clamshells or corrugated consumer packs.

“We are seeing an uptick in interest from customers in bagged stone fruit due to consumer perception that bagged fruit is more hygienic than the bulk product,” says Megan Schulz, director of communications for Giumarra. “Despite information from the FDA stating that food is not associated with the transmission of COVID-19, consumers are still exercising great caution, and we foresee packaged product continuing to increase in demand.”

Even before COVID-19, bagged peach production had sky-rocketed in popularity.

“Almost 40% of what we ship is in a bag or some type of pack. We expect this to increase by 50% to 100% this season,” says Daryl Johnston, vice president of sales and marketing for Titan Farms, LLC, in Ridge Spring, SC.

Two-pound bagged peaches don’t cannibalize bulk fruit but are incremental and a real game-changer to sales, according to Will McGehee, founding partner of the Fort Valley, GA-based Genuine Georgia Group, LLC. “Reports from retailers sharing loyalty card data tells us that the bag brings new shoppers into the category.”

Stone fruit is so colorful that Freshfields’ McGrath uses this to advantage. “We will do some color breaking to make the section pop. Kiwi can be a nice item to put in between peaches and nectarines, as it is a complimentary item and will break up the reds and yellows of most soft fruit.”

“We suggest building a display with six to up to 40 of these boxes in the front of the store in a stand-alone display from June 15 through mid-July. We’ll be running display contests using this box with some of our retail partners,” says Johnston.

The company has also introduced a new four-count premium eco-box with graphics designed to attract millennials to peaches.

The display size best corresponds to the season.

“In the winter, displays are usually smaller and geared toward offering the fruit as a service to those customers who seek it out,” says Jon McClarty, president of HMC Farms, in Kingsburg, CA. “In the summer, when the fruit is plentiful, it’s all about the psychology of abundance, meaning that a big display is an inherent recommendation to buy.”

There are other ways to enhance displays and stone fruit dollars.

“Cross merchandising is time-consuming but effective,” says Angela Hernandez, director of marketing for the Trinity Fruit Co, Inc., in Fresno, CA. “We suggest cross promoting our stone fruit with the seasoning Tajin, with salad kits, shortcake and even in grilling displays featuring nectarines on a kabob.”

Recipes are always helpful in boosting sales, says Simonian. “If you have a peach cobbler promotion, you have the recipe, the peaches and ingredients for making the cobbler, and I think that would boost sales for all the items. Especially now when more people are cooking from home, I think it would be a great time to promote recipes either directly in store or through the social media channels.”

Price is always key, but not the only means to successful stone fruit promotions.

“We like to use every tool. First, promotional pricing is number one because it drives both trial and volume sales. Beyond this, we work with our retail customers on several additional strategies. For example, coupons, both in-store and online; education, with point-of-sale or via social media posts letting customers know what is a peacherine or a plumcot; and demos are effective when they can be done. Ultimately, we get the sale and the flavor of the fruit keeps customers coming back.”