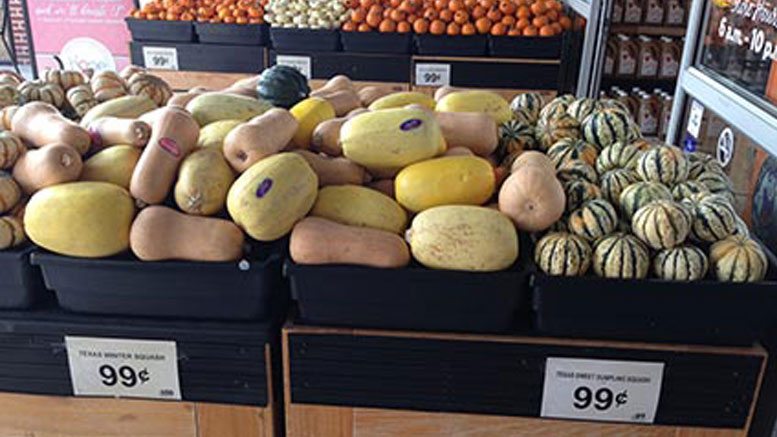 The most effective merchandising tactics for winter squash.

The use of the terms “winter” and “summer” squash are a bit misleading. Both are warm-season crops, but winter squash has traditionally been grown for winter storage.

According to the University of Georgia Cooperative Extension, unlike summer squash, which are harvested immature, winter squash are harvested at full maturity so they have a much longer shelf life (several months up to a year compared with two to three weeks for summer squash).

“That has a lot to do with ease of cooking and smaller sizing of the squash,” he says. “The most popular variety, not only seasonally but year-round, is Butternut. Hubbard squash used to be a very large variety but has decreased due to smaller sizing.”

Timothy Coolong, associate professor, vegetable production at the University of Georgia’s Department of Horticulture, Tifton Campus, says most new varieties of winter squash have PM resistance, meaning they are resistant to powdery mildew, a chief concern for growers.

Victor Savanello, first vice president for the Eastern Produce Council and director of produce and floral for Allegiance Retail Services, LLC, headquartered in Iselin, NJ, says he thinks more people are aware of winter squash than in the past.

“Whether it’s the popularity of a lot of these cooking shows, or the foodies just exploring, I don’t know, but there is definitely a resurgence of interest in the category,” he says. “We usually include the standard Acorn, Butternut and Spaghetti, with the addition of the varieties of Delicata, Hubbard, Turban, Kabocha and Sweet Dumpling, to name a few.”

“The trend we are seeing most is having the more colorful varieties available in the fall for displays, and then growing larger amounts of the better storage squash to fill orders throughout the winter,” she says. “The varieties that store better are Acorn, Butternut, Kabocha and Sweet Dumpling, and by December and January, they are our best sellers.”

In the past, winter squash was typically used as a hardy comfort meal and not as heavy of a dish compared to potatoes or sweet potatoes.

“Winter squash is usually cut in half and fibrous matter and seeds inside are removed,” says Schueller. “It’s usually a savory side dish, but consumers are now exploring baking pies and dessert dishes with them.”

Melissa’s offers this scrumptious suggestion for winter squash: Cube the squash into 3’’ pieces. Place skin side up in a shallow baking dish and fill ¼ of the dish with water. Pierce squash with a fork. Bake at 350°F for 35 to 40 minutes, or until tender. Top with butter and herbs, honey or brown sugar.

Coolong believes retailers should focus on showing people how to use squash in a variety of meals.

“Many consumers simply think of baking them or frankly do not know how you would utilize a relatively hard-shelled squash,” he says. “This differs regionally and it seems that some regions of the United States utilize them more than others.”

While many people bake or roast the winter squash, Savanello has seen an uptick in the number of people using squash as a base for hearty soups and stews, particularly in cold winter weather.

Darvel Kirby, business director, produce, for The United Family, headquartered in Lubbock, TX, says winter squash has become more popular throughout the year but especially in the fall and winter. The store offers Acorn, Butternut and Spaghetti Squash regularly.

“Baking, grilling and boiling winter squash are all used for recipes. Butternut has also become very popular to prepare as baby food,” he says. “We offer Butternut Squash already peeled, cut and diced, which makes it easy to prepare at home.”

There are numerous ways to use winter squash in recipes, Boyle notes, citing substituting spaghetti squash for pasta; stuffing ravioli with squash; adding squash to gnocchi instead of potatoes; and adding it to chicken soup.

“Butternut is nice for making a pie instead of pumpkin, or cheesecake; Kabocha is considered the best squash for a macrobiotic diet, and can be made even for breakfast with rice,” she says. “Large squashes are great for stuffing for Christmas time. Cut a hole in the top and scoop out the seeds and membrane. Then stuff with ground chicken, turkey or beef.”

Boyle has a simple philosophy for success at retail: “Build it high and watch it fly.”

“Large displays with handmade wooden bins are very attractive,” she says. “Mixing all the colors and varieties together make for a very eye-catching display. You can use the farmer bins they come in or stack the 40 boxes into manageable displays, again using the same color/variety idea.”

She also believes placing identification stickers on each squash is helpful for customers contemplating which variety they are looking to purchase. Some farmers have even gone the extra mile to put nutritional content on the sticker — especially for the larger varieties.

“In December, supply and demand is different than fall. Your colors of squash may be less, but still keep the squash together in the display area to continue strong winter sales,” says Boyle. “Choose one or two to do an advertisement this time of year to keep things moving.”

Winter squash varieties typically end up near potatoes and sweet potatoes in the produce department, but industry experts suggest the displays be beefed up come December.

“Most retailers are offering line price on the variety squash and offer a mixed bin of the varieties of squash offered,” says Melissa’s Schueller. “This takes confusion out of variety and per-pound pricing, which is very attractive to consumers.”

At United, large displays of winter squash are highlighted on tables off of the refrigerated cases and also out on the front porch and around front entryways of the store.

According to Schueller, pallet bin merchandising is key with variety squash, as it can be moved to any part of the produce department and demonstrates the retailer offers produce seasonally, as well as peak of the season selections.

“In December, a retailer should position winter squash as a holiday hearty comfort food,” he says. “Hanukkah, Christmas and New Year’s are key holiday promotion days to promote dishes most commonly associated with winter squash.”

Melissa’s offers customized signage to its retailers, including posters identifying the different squash varieties to help educate consumers if they ask questions about flavor profiles.

At Allegiance, Savanello says he usually displays winter squash in low-profile bins, which act as a great merchandising unit in the stores.

“They are usually high graphics, and really set the tone for the season,” he says. “We try to display them in mass. We try and build huge seasonal displays to capture the attention of our consumers. These squash usually merchandise so well because of their great variety of colors and shapes. They make a great display.”

Schueller helped define some of the most common winter squash, adding the newest variety this season is Butterkin, a butternut squash in the shape of a pumpkin.

Acorn: One of the most popular winter squash. The skin varies in color, and they are usually baked or served in halves or rings, either sweetened and spiced or stuffed with a savory sausage stuffing.

Banana: A cylindrical winter squash. The skin can be ivory or light pink in color, and the orange flesh is firm and fine textured.

Buttercup: It has a light blue-gray turban with a dark green or orange shell flecked with gray. The inside is orange and the flavor reminiscent of sweet potato.

Butternut: This large, cylindrical winter squash looks rather like a pear-shaped bat. The smooth shell ranges from yellow to light orange in color. The inside is sweet and orange in color.

Carnival: This squash is a cross between an acorn and a sweet dumpling squash. Its skin is striped and dotted, while its flesh is deep yellow and sweet tasting.

Delicata: It has a pale yellow skin with parallel green lines. Inside, the succulent yellow flesh tastes like a cross between sweet potatoes and butternut squash. It is best baked or steamed.

Gold Nugget: Looks like a miniature pumpkin and has a sweet flavor. It is best to bake or microwave whole.

Hubbard: A large winter squash with a thick, bumpy, hard shell ranging in color. It is best prepared boiled or baked. Because of its texture, the yellow-orange flesh is often mashed or puréed and mixed with butter and seasoning before serving.

Kabocha: This winter squash has a beautiful jade green rind with pale greenish-gray streaks. When cooked, its pale orange flesh is tender-smooth and tastes sweet.

Red Kuri: Similar in texture to the Butternut, but smoother. It has a distinct taste of chestnuts. It can be used in the same manner as Butternut.

Turban: It has colors that are bright orange, green or white. It is popular for centerpieces, and its top can be sliced off so it can be hollowed and filled with soup.

Unlike an apple or banana, not everyone understands the best way to utilize the winter squash and the care needed in cutting them correctly.

Darvel Kirby, business director, produce, for The United Family, headquartered in Lubbock, TX, says a key to selling more is to help customers figure it out.

“We educate our produce team members to be able to engage our customers with information,” he says. “We also offer recipe cards, which include winter squash ideas and instructions.”

How to cut squash really depends on the preparation, according to Debra Boyle, director of business development for Fresh Direct Produce, doing business in Vancouver, B.C.

“Because of the tough outer shell, a sharp chef’s knife would be optimal, as well as a large cutting board,” she says. “Some seeds can be scooped out and roasted for the kids. Add some soya sauce and a bit of oil, and roast.”

Victor Savanello, first vice president for the Eastern Produce Council and director of produce and floral for Allegiance Retail Services, LLC, headquartered in Iselin, NJ, says cutting displays should be done in the store.

“One way to show the consumer how to cut one of these squash, and also get them interested in them, is to cut them in half, lengthwise, and over-wrap them for the customer to see,” he says. “It serves two purposes— it shows them how to correctly cut the squash, even if subliminally, and it also shows them what’s under that hard exterior shell.”