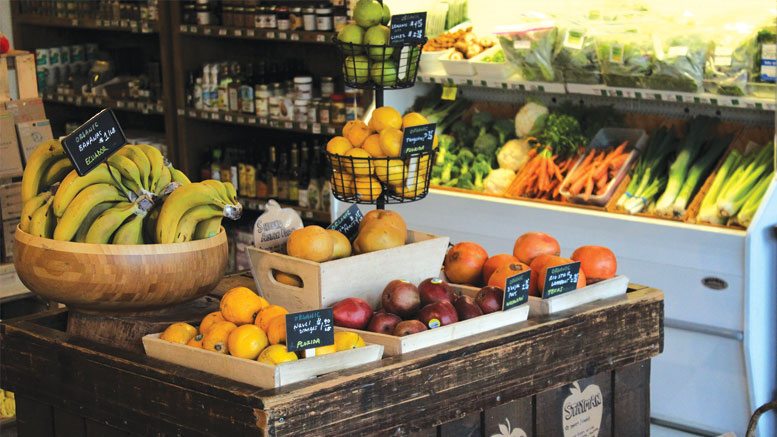 It might be small in stature‭, ‬but it’s big in the heart of the community‭.‬ 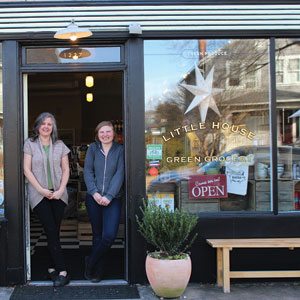 Erin Wright grew up in Virginia and spent many summers working in her father’s vegetable garden. “The pungent smell of tomato leaves and the feeling of being lost among the towering bean plants have stayed with me, along with the satisfaction of gathering fresh food for that night’s dinner. Those summer days and their gifts of fresh produce were my introduction to great seasonal cooking,” she says.

As she grew, agriculture remained a great deal of interest to her. She studied agriculture in grad school and helped start a couple of farmers markets in Richmond, VA; she even co-wrote a blog about home cooking and seasonal eating, and all the things happening around food in the area.

“I was very interested in food and how it affected our communities and how it impacted our consciousness in terms of knowing where your food comes from, and how it affects your place in the world,” says Wright. “There is a direct connection between what you eat and the hands that touched it before that.”

Wright began working at a botanical garden to help teach kids about foods and nature, and combined with her work at the farmers market, she realized it was a little too much. “I would think, ‘I wish there was a place in my neighborhood where I could get milk that I felt good about and have another outlet for farmers instead of them being dependent on whomever showed up at the farmers market,’” she says. “That’s when I decided to open my own store.”

Little House Green Grocery in Richmond, VA, is situated in a historic neighborhood that was built in the 1920s. With lots of small storefronts, the store fits in perfectly with the voice of the community. It opened its doors in 2012, and has been thriving ever since. “We started out with about $10,000 worth of inventory, which in my mind seemed like a tremendous amount of money; but now we’re at about three times that,” says Wright. “Today the store feels stocked without feeling cluttered.”

The neighborhood is a mixture of young families and empty nesters, and the store’s make-up includes shoppers of all generations. Although the store is only 1,600 square feet, hundreds of residents in the neighborhood rely on it for everything one needs to make breakfast, lunch and dinner, or to have a party or event. “Our philosophy is ‘local first’ and anything that we can buy locally we prioritize,” says Wright. “We get local produce year-round, and I don’t think that before I started this store, that I even knew that we were capable in Virginia of doing that, which is great.”

The store offers a veggie-box, a year-long subscription to a box of fresh local and organic produce packed and ready for pickup every Wednesday. The subscription runs for 12 weeks at a cost of $25 per week. Also included in every box are two recipe suggestions. “We not only want to give people the vegetables, but ideas as to what to do with them,” says Kittie Storey, kitchen and produce manager. “We are the place to go for local goods, as we spend a lot of time searching them out and trying to foster small businesses just getting started. Because we’re small, we can be a great place for people to try out their products and see what they need to do to market and what that takes.”

One of its favorite distributors is the Local Food Hub out of Charlottesville, VA, a non-profit, 100 percent local provider, which offers produce from different sized farms, so it allows the store more access to farms throughout the state. “People can ask us, ‘Where is this from?’ or ‘What do you know about this farm?’ and we can answer with no problem because we have talked directly to that farm or producer,” says Wright. “We have done a lot of the vetting for people and work hard to find these great products so we can pass on our high standards to the consumer.”

One look at the produce displays, and it’s obvious that it’s an important element to the store’s success. Once customers walk in, they are face to face with the fruit area, which is packed with local varieties. “Right now we have five bins of apples and a sign educating people about what all the differences are, where they are from and what best to use them for,” says Wright. “We also have a bin of things that don’t need to be refrigerated, like squash, onions and potatoes, and local tomatoes hydroponically grown.”

Of course, the section is packed with numerous other items, including citrus, bananas, mushrooms, roots and a produce cooler filled with different vegetables that are delivered every day. “Vegetables are responsible for 10 percent of our gross sales,” says Storey. “Being a smaller store, I think we have one of the largest produce departments compared to some of the other independently owned stores out there. We bring in a lot of variety of different produce and educate our staff and customers to what’s out there besides the basics.” 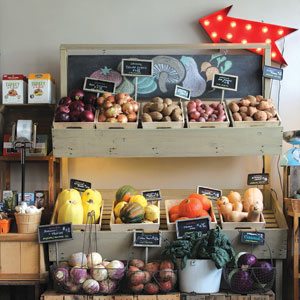 One of the best ways to bring customers to the store, Wright has discovered, is by holding tastings and events with local producers — which helps both Little House Green Grocery and the companies who supply its food. “Farmers have become friends and we work together spreading the love of local food. People can come and actually talk to those who are buying their product and see their reactions,” says Wright. “Plus, customers can try stuff and fall in love with it. Maybe they hadn’t even noticed it in the store, but after tasting it, they will know what they’re getting.”

In the past year, the store began making its own salads and sandwiches from items it carries and sells at the deli case — and it’s proven to be extremely popular. “There are many people who have trouble figuring out exactly what they want to make for dinner; it’s a challenge a lot of people face, whether single or they have families,” says Wright. “Having it right in front of you is a great attractor. Plus, you can have something you’d never make for yourself.”

The store offers customers recipes, and is very active on Facebook, Twitter and its own website to educate people about what’s in the store and what can be done with the local produce it carries. “Our customer base is mainly families, so I think they’re not only looking for convenience, but also a one-stop shop,” says Storey. “I’ve always had a passion for food and agriculture, and I’m so happy to be a part of this store.”

In 2014, there was a fire in the store, and it was forced to close down for two months. The community held fundraisers and supported the store’s re-opening in a multitude of ways. That showed Wright just how important and special Little House Green Grocery had become in the area. “I definitely think our personal touch is our strong point. We take special orders for customers, we know people’s names, and there’s a sense that you could really be anonymous in this world,” says Wright. “You could buy something online and never have anyone notice you; but we want people to know we care and it’s very satisfying for us, and hopefully for the customers.”

The store is open seven days a week and a team of five employees does their part to keep Little House Green Grocery the talk of the neighborhood. “We love being here and we love what the food system has become,” says Wright. “We cater to as much as the community as possible — they’re our driving force. Without our local farmers and customers, we wouldn’t be here.”