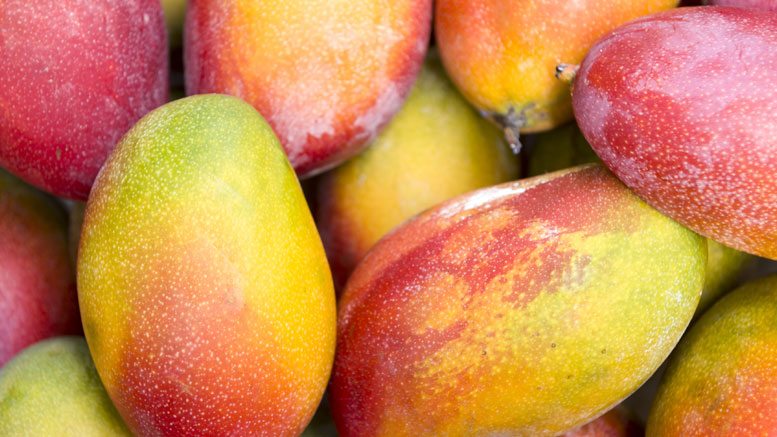 The National Mango Board (NMB) is just one of many organizations with data that shows mangos are the most consumed fruit in the world, and even though it might not crack America’s Top 10, demand for mangos is increasing around the country.

When fall hits, the U.S. receives its greatest supply of mangos from South America, and even though weather issues from early 2015 may be somewhat problematic for the industry, it’s still expected to be a banner year.

Daniel Pollak, co-owner of CarbAmericas, based in Pompano Beach, FL and current chairman of the National Mango Board (NMB), headquartered in Orlando, FL, notes the U.S. is one of the largest importers of mangos from all producing South American countries and that will continue in 2015.

While summer is too early to forecast the volumes of mangos expected to be exported into the U.S. from Brazil, Ecuador and Peru, overall consumption in the U.S. as a whole is increasing at excellent rates.

“Depending on the quality and volume of the crop, it is safe to assume the market can bare steadily increasing volumes of mangos arriving into the U.S. for this year, as well as many years to come,” says Pollak.

Leonardo Ortega, director of research for the NMB, says annually, Mexico supplies an average of 67 percent of all mangos imported into the U.S., followed by Ecuador and Peru with approximately 10 percent each. Brazil is next with an estimated 6 percent of mango imports.

Greg Golden, East Coast sales manager for Amazon Produce Network, based in Vineland, NJ, considered one of the largest mango importers in the U.S., says the hot water treatment protocols have been expanded to allow fruit up to 900 grams to be shipped to America, meaning the company can now import sizes 5s and 6s.

“Brazil looks to have a nice crop this year with the first arrivals expected to port on August 14 and volume building steadily up to a peak throughout October. The window for Brazil to ship is looking large, like 16 weeks,” he says. “Mexico is running two to three weeks ahead of schedule, meaning they will make an early exit. Ecuador is looking like they will be delayed. September should be very tight on supplies.”

Geno Valdes, president of Sunburst Farms, based in Miami, FL notes a new trend in the industry is the 6-count and 5-count sizes, which are new to the region, and should introduce more people to the market.

One of the greatest issues currently affecting the mango industry is the climate, since most regions require a change in climate to naturally induce flowering. Climate is playing a major factor right now for countries, such as Ecuador and Peru, as summer temperatures are not suitable for optimum flowering and fruit setting on the mango trees.

“Higher temperatures than usual so far in Ecuador are expected to delay growth process resulting in a possible later start and lower yields of fruit for their season,” says Pollak. “There is also a worry if things don’t change, Peru might face the same climate conditions exhibiting the same results [as Ecuador].”

Golden adds that the signs of El Nino weather phenomenon (early and heavy rains) are strong, causing a lot of uncertainty about the Ecuador and Peru seasons.

“The transition from Brazil to Mexico will cause some supply issues as Ecuador has predicted to start at least three weeks later this year,” he says. “We’ve decreased our product for the upcoming year due to weather patterns that have been caused by El Nino. We expect to see less production coming out of South America.”

Valdes says he expects to experience higher prices compared to last year due to EL Nino and its impact during Ecuador’s growing season, which will result in less volumes shipped to the U.S. market.

“We will work with other supplier partners and help each other cover shortages as our individual production patterns dictate,” he says. “Retailers are at the mercy of the market and how much someone will spend for mangos. However, selling other grades like 5 and 6 counts will keep product flowing and introduce customers to new sizes.”

The amount of U.S. grown mangos available for consumption is extremely small. This makes the crops from South America a vital part in the supply chain, as Brazil, Ecuador and Peru are essential in being able to offer the American consumer mangos 12 months a year.

“From the end of August through the end of February, if you are eating a mango, most likely it’s being imported from one of those three countries,” says Pollak. “The food safety, handling, consistency, quality, appearance, and flavor from the South American countries are some of the highest in the world.”

There are two popular varieties of mangos, Kent and Tommy Atkins, which come from South America — specifically Ecuador, Peru and Brazil.

“Expectations for price are high on the grower side, because the prices were pretty high last season from start to finish except for a couple of weeks around Thanksgiving,” says Golden, explaining that prices remained high through March.

While color bares no indication of ripeness, the Kent is known for its dark green skin (often with a dark-red blush over a small portion of the mango). The Tommy Atkins is recognized for its dark-red blush that covers much of the fruit with green and orange-yellow accents. The Kent is sweet, rich and juicy with limited fibers, while the Tommy Atkins is more mild and sweet with a firm flesh due to fibers throughout.

“The difference in textures of these two varieties speak to the many ways consumers can incorporate mangos into their dishes,” says Rachel Muñoz, director of marketing for the NMB.

The U.S. has unlimited opportunities for growth potential in the mango category and retailers can embrace the natural growth by promoting this fruit in a number of different ways. In Pollak’s opinion, retailers should embrace the differences from each producing country when the crop switches countries.

“Connecting the variety of mango, different characteristics of the mango variety with the country would give the retailer a way to engage with their consumer, encouraging them to buy more fruit,” he says. “Brazil’s main crop is the Tommy Atkins variety, beautiful looking fruit with high blush and lots of color. Ecuador follows with a mix of varieties consisting of Tommy Atkins as well as Kent variety. The Kent variety is more of a green-skinned mango, with less red, orange, and yellow blush; however, it has a slightly sweeter and richer flavor. Peru completes the South American supply chain with mainly Kent mangos.”

Golden says mangos are growing in consumption due to more awareness by the U.S. consumer. “The flavor is showing up in every imaginable food product, so it has really gone mainstream,” he says.

“Retailers need to keep promoting in synch with the peak arrival volumes,” says Golden. “A great way to sell mangos is to offer fresh-cut mangos in large plastic containers where consumers can see that juicy yellow-orange flesh calling out to their taste buds.”

For instance, when the weather gets cold and depressing, Golden thinks retailers should put up tropical-themed mango promotions, such as “Back to Summer” or “A Taste of the Tropics.” He also suggests retailers focus on the versatility of mangos and share recipes and educational materials to show Americans what makes mangos the most popular fruit in the rest of the world.

“Mangos are the most eaten fruit on Earth and are used differently in countries and cultures throughout the world,” he says. “There are so many ways to enjoy a mango and so many different varieties that you could never do it all.”

Muñoz says NMB research shows ripe mangos appeal to consumers more, so it’s vital that retailers implement the NMB’s “Ripe and Ready to Eat” program that will entice shoppers to purchase more frequently. Including additional displays (outside the tropical fruit section and/or outside of produce) can also prove to increase sales, especially during high volume times.

“As always, exposure, signage and placement in the retail store will help drive sales, but with a little more effort of using some of the POS material out there to give the consumer confidence on how to select and cut a mango will increase sales,” says Pollak. “Offering customers our “Ripe and Ready to Eat” program will help all consumers be confident with the mango they bring home and eat the same day. For those consumers looking for an easier fresh mango experience, offering customers a fresh-cut mango bowl or adding to the traditional fruit salad offering will help increase sales.”

Getting The Word Out

Muñoz notes the NMB promotes mangos year-round since they are always in season. The current campaign for the NMB is entitled, “Always Summer,” and promotes the idea that mangos bring a bit of sunshine and tropical flare to every season in the U.S., from all over the world, including South America.

The NMB also has tools on its website to help educate consumers on the different varieties and when they are available from countries in South America. The NMB also provides a series of online training videos for produce managers and associates, called “Mango University,” which feature fun and short videos offering tips on how to improve mango handling, storing, displaying, and on educating consumers on how to select and cut mangos.

Retailers can also enter the organization’s July Mango Display contest to become the “Mango Retailer of the Year.” In addition, retailers can sign up for the Mango Mover Newsletter that goes out monthly, which provides tips for handling, promoting and merchandising mangos.