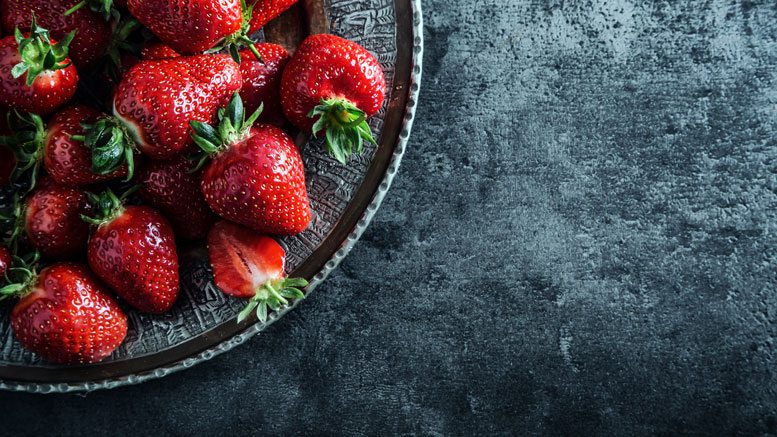 And people rely on Florida suppliers to keep consumers’ berry-loving palates satiated even when the snows are flying and people are craving a burst of fresh berries. While California strawberries peak March through September, Florida dominates the winter crop.

Watch For The New Sweet Sensation

The main Florida strawberry variety is Radiance, though the “Sweet Sensation” is a new and very sweet berry that people are raving about. This new variety, officially called FL-127, accounts for about 15 percent of this season’s acreage, according to Sue Harrell, director of marketing for the Florida Strawberry Growers Association (FSGA), headquartered in Dover, FL.

But supply is fairly limited for the Sweet Sensations. “To grow strawberries, you don’t plant seeds, you plant runners,” says Harrell, who notes it can take up to seven years for a new variety to reach commercial levels.

“Most growers have some Sweet Sensations in limited numbers,” says Jim Grabowski, marketing director for Well-Pict, headquartered in Watsonville, CA. He reveals growers are cautious about relying too heavily on a new variety at first. “You never know exactly how it will perform and there are not enough plants going around to plant huge acreage.”

The Florida Strawberry Growers Association partners with the University of Florida to develop new varieties of berries that will appeal to consumers, especially in the taste department.

Well-Pict has also been working with test plots of experimental berries, seeking a proprietary variety specific to Florida. Grabowski notes the company found a good variety, but it peaked too late in the season. “It’s a whole different ballgame in Florida than California as far as growing conditions,” he says.

The FSGA indicates farmers typically prepare land in August and begin planting in late September and through mid-October often putting in 20,000 plants per acre in order to have fresh Florida strawberries by Thanksgiving. Supplies typically last through Easter.

“Generally, the Florida season is from Thanksgiving through early spring, depending on how hot it gets in Florida in the spring,” says Grabowski, noting that the business is very weather dependent.

Gary Wishnatzki, owner of Wish Farms, in Plant City, FL, says the farm typically plants in October, though the preference is to get some berries, such as the Treasure variety, in the ground a little earlier. “It’s one that we like for early season,” he says. “It’s a darker berry with a naturally darker red color and a very good brix, so it’s very sweet.”

Wish Farms typically picks most berries in December and January, and then moves into puree and frozen berry product production after Valentine’s Day.

Shawn Pollard, sales and marketing for Astin Strawberry Exchange, in Plant City, FL, notes his company’s program is slightly earlier this year, with peak production in January, February, and the first two weeks of March. “In years past, we focused on Florida berries as March opportunities and had a glut of product in March,” he says. “Last year, peak production was on the 4th of February.”

This earlier timing helps with one favorite strawberry holiday: Valentine’s Day. “In years past, we were always scared to death about Valentine’s, but in 2015 we had over 100,000 cases by the 4th of February,” says Pollard. He says earlier planting speeds the process up, and the supply will be out a bit earlier this year.

“In the past a lot of people have a mindset that we won’t have the product until the 10th of December but we actually start earlier now and have product in late November or early December,” says Pollard. “We’re about two weeks ahead of where we were two or three years ago.”

For retailers, this winter strawberry crop is ideal for promoting and offering cross-merchandising specials to berry-seeking consumers. “They’re basically available when California berries are not available,” says Grabowski, who notes Florida berries are a U.S.-grown option that many prefer over internationally imported berries.

Growing in Florida can have its share of weather-related challenges. “In general, the Florida strawberry season has a few more ups and downs with production than, say, California just because the time of year we’re growing is winter time and the temperature can vary quite a bit more,” says Wishnatzki. “One of the things we do to try and help mitigate some of the risks to retailers on the supply side is trying to forecast the crop properly. We’re using a proprietary system that we use to forecast the crop using the bloom counts on the berries and we’ve been developing it for last 10 years.”

Florida varieties are different from California or Mexican berries due to a number of factors. “Our growing season is unique because we’re growing in the winter months,” says Harrell of FSGA. “Our varieties are different from California varieties due to our weather and growing conditions. We specifically breed new berries and are working with the University of Florida specifically for our climate and growing season.”

Pollard emphasizes the wonderful flavor of the berries, as well as their robust shelf life. “First and foremost is the flavor,” says Pollard. “That’s one of the reasons that people are attracted to Florida berries. They’re flavorful and the size is large.” He notes the berries also have a good shelf life and travel very well, including on 3,000-mile trips into Canada to meet north-of-the-border consumer demand.

According to the FSGA, Florida strawberry growers have planted more than 12,000 acres this season, which is a number holding fairly steady from last season. The FSGA is also expanding its strawberry research acreage this year. Some individual companies have increased acreage. Pollard says Astin has increased to around 1,300 acres for this season, noting they typically produce about 15 percent of the state’s total volume. Wish Farms also increased its growing acreage this season.

Most growers find volume is expected to be steady or increased in the coming season. “Expect higher volume,” says Pollard. “The plants so far have been really outstanding.”

Wishnatzki notes his company uses a scientific bloom model in order to forecast the coming crop. Typically, they can forecast three to four weeks out, which is the typical time from bloom to berry. “It’s all based on bloom counts,” says Wishnatzki. “The bloom model gives retailers more information especially when there are big promotions.”

Berries Travel Up the Coast and Around

Florida strawberries are primarily shipped to the East Coast, but that doesn’t mean they’re staying near Florida. Astin Strawberry Exchange ships berries to Newfoundland in Canada, a distance of around 3,000 miles. It also ships as far west as Denver. Pollard notes California and Mexican-grown berries typically fill the needs of retailers to the west of that area.

Many Florida farms partner with California growers. “We’re partnered here with growers in California so we’re involved in the California strawberry deal as well,” says Wishnatzki. “As far as Florida strawberries, it’s rare they make it out to California. Our distribution is pretty much focused on the eastern half of the U.S. and eastern Canada,” though he notes some berries make their way to the Caribbean and other destinations.

Grabowski says Well-Pict primarily ships its Florida-grown berries to the Northeast and Midwest but also ship as far as Texas.

The Florida Strawberry Growers Association notes its berries travel for fewer miles to East Coast consumers than berries originating in other locations. This means fresher and tastier berries for consumers to enjoy.

Pollard notes they have facilities that can pre-cool the berries. “I can pre-cool five truckloads of berries at one time,” says Pollard, who notes that quickly chilling berries helps shelf life. “It makes a huge impact on the overall condition of the fruit and is really reflective of the end product and consumers will be pleased because they’ll get a better product,” says Pollard.

Marketing For The Strawberry Season

In February, FSGA will partner with “In Store Audio” and run 30-second recordings in more than 800 stores. These sound recordings target consumers and will play every hour. The message will include information about the availability and nutrition benefits of Florida strawberries in order to educate and influence consumers. The ins-store audio messages were also aired to shopping consumers in December.

Headquartered in Lakeland, FL, Publix is located near key strawberry production area in Plant City. “In February and March, the ideal season for strawberries, we feature the fruit in our At Season’s Peak campaign,” says Maria Brous, director of media and community relations for Publix. “We share with our customers and associates everything they need to know about strawberries from the peak of season to nutrition information, recipes, growing, selecting, storing and eating of strawberries. Our campaign is also supported in-store with collateral pieces, billboards, radio and television spots. In-store, we also feature secondary displays.”

FSGA is also focusing on revamping its website and social media efforts. “We found with social media, we get more exposure,” says Harrell. She emphasizes this outreach also helps consumers learn that Florida is their local strawberry provider. “If you live in New York City, you’re closer to our marketplace than California or Mexico,” says Harrell. “We would be their local market…. They want to know where their fruit is coming from.”