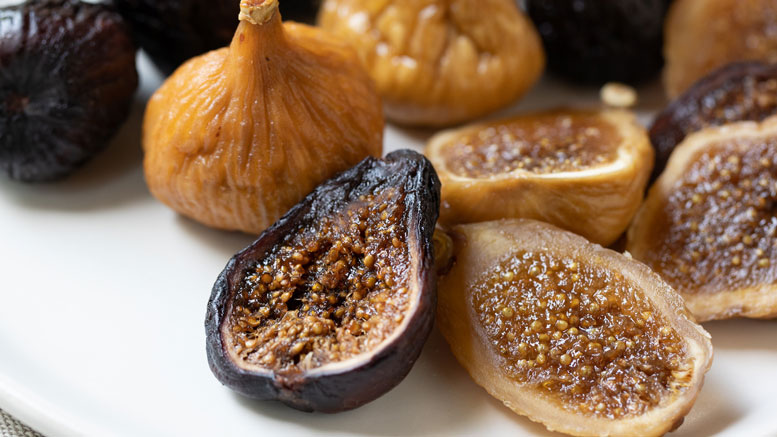 “There is good potential for year-round growth as long as the grocer and manufacturer are promoting during off-seasons to encourage new buyers to experiment, and putting dried figs front-of-mind to the consumer who doesn’t expect it to be offered year round,” he explains.

“Sales have been on the rise for the past three years,” she reveals. “Consumers are discovering the wonderful flavor and outstanding nutrition of our Orchard Choice and Sun-Maid California figs. Plus, we’ve got a terrific new product in improved packaging that enables easy snacking in a resealable cup.”

Another advantage for retailers is dried figs do not require refrigeration, points out Mike Maxwell, president of Procacci Brothers Sales, Philadelphia, PA, which imports dried figs from Greece and Turkey. “Stores with the right demographic will move dried figs,” he says. “There are consumers that regularly like to eat dried figs, alongside products like apricots and dates.”

Throughout the year there are many retail promotional opportunities. CFAB’s Stockli says dried figs “fit perfectly” during winter when consumers are looking for healthier snacks and ingredients.

Figs are also a celebratory fruit, and can dress up spring occasions such as Easter and Mother’s Day. Summer sees the arrival of fresh figs, which can be displayed alongside dried figs. Finally, autumn provides “endless opportunities” to promote dried figs as an ingredient or special gift.

The problem, says Maxwell, is that although supermarket displays are laden with dried figs for the holidays, afterwards many retailers cease carrying the product. “I think it’s the retailers who are holding back; they don’t keep up the displays,” he laments. “We need to change the retail mindset because dried figs do sell year-round but often the opportunity for shoppers to buy year-round is not there.”

United Supermarkets in Lubbock, TX, retails dried figs for 12 months of the year, plus fresh figs in season. “We always have dried figs but it’s not an item that we sell in significant volume,” concedes Joseph Bunting, produce business director.

“People don’t know enough about dried figs yet; they’re more popular with the older crowd,” Bunting continues. “It’s not an item that’s usually on the shopping list but it’s one that people are surprised by if they try them. You’ve got to get dried figs into their mouths! Typically, a demo works best so they can try before they buy.”

Valley Fig’s Cain accepts that competition is “fierce” for shelf space but emphasizes that consumers need the encouragement. “Figs are a notable impulse purchase item with a high ring and great profits; consumers simply need to have them available to spur purchases,” she states.

If displayed alone, shoppers will walk “right by” dried figs, according to Procacci’s Maxwell. The trick is to build full, attractive displays using dried fruits and nuts of different pack sizes and origins. “Good merchandising is common sense; if you group products that go together, it stands to reason that they will sell,” he suggests. “In ethnic stores, you’ll always find dried figs with the pistachios and cashews.”

United Supermarkets finds displaying dried fruits and nuts together works well. “We also merchandise dried figs close to the dried tropicals section to tie them in with items like dried mangos,” Bunting says.

Above all, Maxwell recommends keeping displays well-stocked. “People will buy dried figs if you present them well; they hate buying from a picked-over shelf. Keep the display bright, cheery, and in good shape. A coordinated effort would result in sales year-round.”

Displaying dried figs alongside fresh figs is also recommended by CFAB. “It helps deliver the message that dried and fresh can be interchangeable in many recipes, and that dried are available year-round for a fig fix anytime,” says Stockli.

Jura of San Joaquin Figs proposes placing chocolate-dipped dried figs alongside dipped strawberries or bananas in sales materials or in-store displays. “We have even seen dried figs moved onto the produce shelves for a week in between rows of bananas, for example, to create an interesting look and to draw attention to their availability.”

Colorful packaging that attracts attention, while still allowing shoppers to see the product inside is also advisable. “Dried figs are golden brown and black, and this is easily lost in a dried fruit section full of many dark fruits,” Jura reminds.

Sampling figs either on their own or as an ingredient has proven to be very successful. “We had one retailer report a 633% sales lift over the same period in the year prior,” exclaims Stockli.

During the pandemic, however, when demos are less likely, Jura recommends simple displays of the packaged product next to pictures or posters. Retailers can also educate consumers about the flavor profile of figs; Golden have a mild nutty, honey taste; while Black Mission figs are earthy, with licorice and spice notes.

Suggestions include: placing figs on cheese plates with nuts and honey; introducing figs to breakfasts to include in overnight oats, smoothies, yogurts, and toast; putting figs in salads, dressings and sides; using figs in savory and saucy dishes (BBQs, Asian flavors, relishes, chutneys, and salsas); adding figs to pizzas, pastas and paninis. And, of course, using figs in desserts such as cookies, cakes and chocolate.

For the holidays, figs are often used in traditional Christmas desserts such as Italian cuccidati cookies; as a compote ingredient for Easter meats; and in stuffing for Thanksgiving. “Many cultures have incorporated figs into different holiday foods; we do most of our promotions around Thanksgiving, Easter and Ramadan,” explains Jura of San Joaquin Figs.

Thanks to their versatility, cross-merchandising is highly recommended to help drive sales and to keep dried figs front of mind.

“Displays of multiple items in areas of the store where these items aren’t normally next to each other, alongside large pictures of recipes, helps encourage buyers to add multiple products to their cart, and try items they normally may not have on their list,” explains Jura. He suggests a breakfast display with dried figs, instant oatmeal, almond milk, cranberries and diced nuts. “Tailoring this strategy to recipes specific to the holiday in mind, or cycling in fresh produce items is useful.”

Generally, cross-promotions with cheese remain the most popular. “From cheddar and Manchego to brie and burrata, figs elevate any cheese plate, and displaying figs near the cheese display is an excellent reminder for consumers,” says CFAB’s Stockli.

Valley Fig’s Cain believes figs belong in the deli and cheese department, and during the holidays she says they “pair beautifully” with nuts and candied fruits.

Figs contain more fiber than prunes, more calcium than milk and more potassium than bananas, plus they are rich in antioxidants, and a good source of magnesium.

In-store signs, therefore, are extremely beneficial, particularly those featuring healthy snacking and nutritional messaging such as: Gluten-free, a Whole Fruit Snack, and with No Added Sugar, or promoting dried figs as a way to get a year-round Fig Fix.