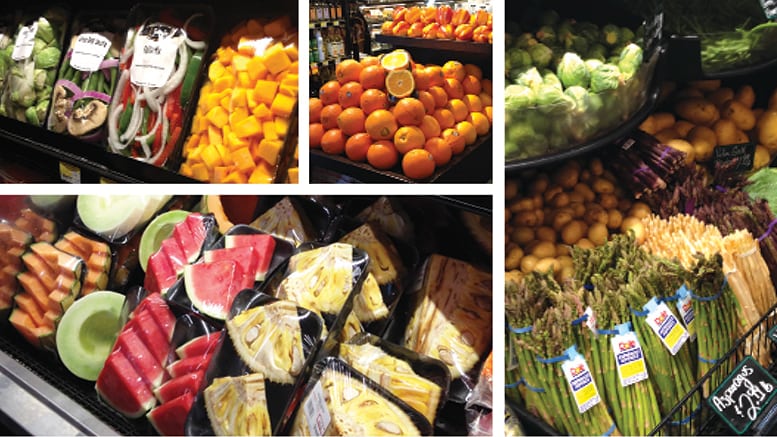 Produce sourced ‘as close to home’ as possible.

When William Straub opened his first store in Webster Groves, MO, in 1901, he would go door to door throughout the neighborhood taking orders every morning, which he then delivered in the afternoon in his horse and buggy.

Clayton is a relatively upscale suburb of 16,000 residents, with per capita income of $55,000 and a poverty rate below 10 percent, as nearly 80 percent of the adults have college degrees.
But these largely suburban customers want to retain ties to the nearby agricultural community.

“Local is extremely popular,” says Lehr. “Local means grown in the state, or in the bi-state area, because we’re on the border (with Illinois). It might be Midwestern, like if there are no fresh tomatoes available from Missouri. I try to get as close to home as possible.”

Although most of the 55 million acres of farmland in Missouri, and across the Mississippi in Illinois, are devoted to feed corn, soybeans and wheat, there is still plenty of room for substantial harvests of melons, grapes, peaches, pumpkins, snap peas and sweet corn.

“We’ve got relationships with quite a few farmers in the St. Louis area,” says Lehr. “I’d rather not mention any of them in particular because I wouldn’t want to leave anyone out.”
At Straub’s, ‘buy local’ extends beyond the produce department as the store website proudly features a Best of Missouri section.

“Straub’s loves local and you will too,” the promotion proudly proclaims. “Looking for that special, Missouri quality? Straub’s is the place to go to get the finest Missouri has to offer. For those near and far, our favorites promise to satisfy every craving.”

The finest Missouri has to offer is, most importantly, fresh vegetables when they are in season. “Tomatoes are a big one in local produce,” says Lehr. “We try to do sweet corn and the soft fruit, too. Then there’s all the cole [mustard family] crops, leafy greens, squash, cucumbers and peppers. People definitely want to know where their food comes from. They also want to support the local economy and get their produce fresher.”

These fresh vegetables make an impression beyond produce in a number of other departments at Straub’s.

There are no fewer than a baker’s dozen salads and wraps listed on the website, from Italian and Greek salads to Asian salad with hoisin glazed chicken, and a spinach, chevre and cranberry salad.

“We use the produce frequently in our kitchens for offerings like kabobs or stuffed peppers,” says Lehr. “They use it in the sandwich program, too.”

Although Straub’s customers want to remain connected to the nearby farms, they have also joined the modern age when it comes to convenience.

“People are looking for convenience, and they’re looking for fresh,” says Lehr, who has been with Straub’s for 19 years. “They want meal solutions and fresh-cut produce. We’ve got a lot of prepared vegetables. As people’s schedules get busier, they want more cut-up fruits and vegetables. I’ve seen this trend for the last five to 10 years, and it gets stronger.”

Through a century and more of changes, Straub’s Fine Grocers remains a family tradition. According to the company website, “Straub’s, through our four retail locations and online market (straubs.com), is known as an outstanding specialty food retailer giving great service to our staff, customers, vendors and community.

The Times They Are A-Changing

Charleston Gets Its First Lidl Store