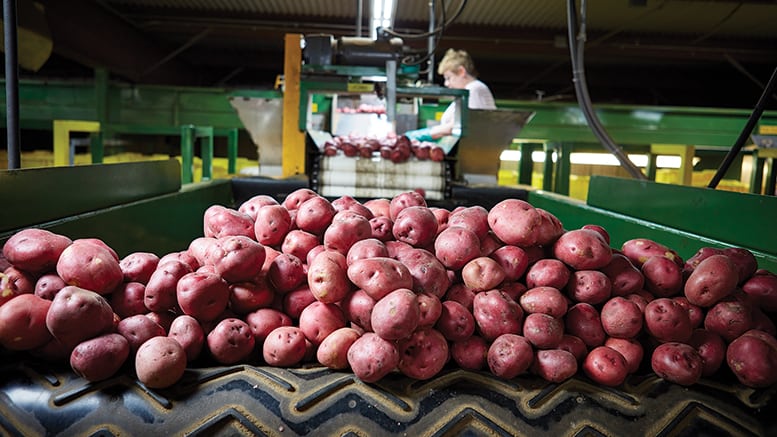 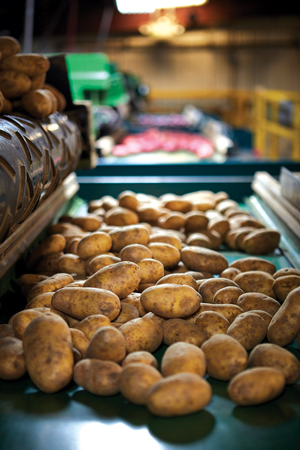 Consumers may first think of Idaho when they think of potatoes. However, when it comes to diverse assortment of spuds, another state is right at the top.

Wisconsin, which is third in the nation for potato production, produces the most varieties of any state, according to Dana Rady, director of promotion, communication and consumer education for the Wisconsin Potato & Vegetable Growers Association (WPVGA), based in Antigo, WI. Russets, whites, reds, yellows and specialty potatoes are grown on an average of 63,000 acres annually.

The continued consumer trends toward variety, locally grown and smaller-pack sizes have the Wisconsin potato industry seeing great potential for growth in the category.

The WPVGA represents 140 growers in Wisconsin, and the organization is tasked with promoting and marketing the state’s potato crop to the masses. Toward this end, it has undertaken a variety of initiatives, including launching the Spudmobile, a mobile education unit that travels throughout the state and the Midwest, visiting schools, sporting events and other community and industry events.

“The Wisconsin Spudmobile is our biggest promotional tool in communicating with the public about Wisconsin potatoes, the health benefits they naturally provide and the importance of buying local,” says Rady. “It has been extremely helpful in communicating to consumers where their food comes from, who grows that food and how it is produced.”

While the Spudmobile takes visitors on the journey from ‘field to fork,’ the organization also creates point-of-purchase materials and signs for retailers to display in their stores. WPVGA offers ‘Buy Local, Healthy Grown’ quarter-sized bins as well as national full bins, and Wisconsin Potatoes Kwik-Lok bag tags, as well as recipes and other items on its website. 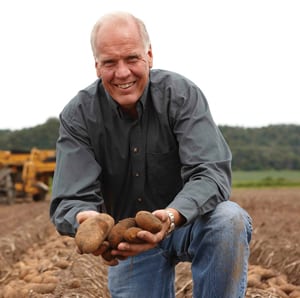 According to Tim Huffcutt, marketing director of Larry Alsum, chief executive and president of Alsum Farms & Produce, headquartered in Friesland, WI, has seen packaging trends change over time. Although he thinks the 10-pound bag is still important for consumers looking to get several meals out of their purchase, not everyone has the same eating needs.

“The trend is toward smaller-pack sizes and also slightly toward the specialty varieties like the reds and yellows and the creamer-size profile, and some fingerlings,” he says. Alsum thinks consumers are interested in trying new ideas and recipes, which makes a variety in offerings critical to merchandising.

Mike Carter, chief executive of Bushman’s Inc., headquartered in Rosholt, WI, also sees a consumer demand for variety. “Some of the specialty varieties are starting to get a little more traction,” says Carter. “While that remains a very small segment of the overall category, I think some of the consumers you might consider foodies are beginning to understand the different varieties of potatoes.”

Convenience packaging has been another sales driver in recent years. “We continue to see growth in value-added, whether it’s the microwaveable type products that we pack, or some of the single-wrapped microwaveable products,” says Alsum. 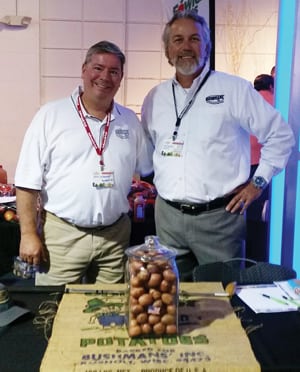 Although those products are in demand, Alsum Farms & Produce also offers foil-wrapped Russets that are ready to pop into the oven and onto the grill, as well as steamer bag products. “I have heard from several senior citizens that it’s just convenient to be able to cook something easy if it’s going to be one or two people eating it,” says Alsum.

“Our 12-ounce pack is a really convenient meal for two or three people; one person can split it into a couple meals,” says Alsum, who forecasts the continued popularity of smaller-sized potatoes because of their ease of cooking.

For some growers, convenience packaging doesn’t seem like it would make sense to shoppers looking for good deals, but it’s the new normal.

When Dick Okray, president of Okray Family Farms, Plover, WI, first saw bagged lettuce in the supermarket, he asked himself, ‘Who would pay two dollars for that when you can buy a head of lettuce for 49 cents and get two or three times as much?’

“We always used to say we can have a load of potatoes just about anywhere east of the Mississippi in a day. It’s still mostly true. The new trucking regulations are putting a little bit of a bite into that, but certainly we still view that as a huge advantage for Wisconsin product.”

“The answer is, everybody,” says Okray. “Over time, the answer is going to be more convenience and giving people just what they want, just when they want it.” Although trends do change, for now Okray says everyone in the industry needs to get their heads around the concept of convenience.

Another aspect still important in promoting to consumers is locally grown.

“Using ‘buy local’ and ‘sustainable’ signage is a driving factor,” says Huffcutt, who recommends retailers tie in Wisconsin potatoes with their larger ‘buy local’ promotions by featuring local growers in signage, recipes and digital marketing efforts. This can then be cross-merchandised with other local products. He points out Wisconsin is often associated with cheese and brats, and this offers an opportunity for grilling promotions.

“Grilling is celebrated during the summer months and is a staple in tailgating season,” says Huffcutt. “Cross-merchandising your potatoes with items in your deli department or creating a second display with all your grill fixings are great tactics to promote your potato category.”

Okray sees great opportunity in promoting local products together as well, saying, “I love the cross-merchandising of local plus local plus local.” In Wisconsin, that could mean grouping potatoes with cabbage and cheese. Retailers already have started taking advantage of pairing possibilities with Wisconsin potatoes. According to Okray, “There’s a move from everybody — from retailers down to producers — to make sure to key on that point and make sure their consumers know it’s all locally grown.” 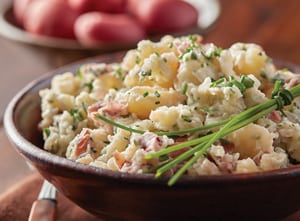 Carter of Bushman’s also sees some retailers doing well with the locally grown angle. “There are some that do a great job on the promotions, and the point-of-purchase materials and calling out locally grown. For us, it’s a huge benefit.”

The ‘eat local’ movement isn’t only about knowing where food comes from, but proximity to market has other advantages. As Carter explains, “We have such a huge freight advantage that allows us to get our product to the market at a rate that’s competitive. It allows our customers to relay some of that savings.”

New driver regulations have made it a challenge, particularly for far-flung distributors, but Wisconsin potato companies can leverage their Midwest location and proximity to retailers east of the Mississippi.

“As this transportation issue continues to be a factor in getting product to market, there’s definitely an opportunity for potatoes in the eastern half of the United States,” says Bushman’s Carter. “We always used to say we can have a load of potatoes just about anywhere east of the Mississippi in a day. It’s still mostly true. The new trucking regulations are putting a little bit of a bite into that, but certainly we still view that as a huge advantage for Wisconsin product.”

Huffcutt also sees shoppers leaning toward buying local for a fresher product and avoiding the harmful effects of potatoes being transported long distances. “Sixty-seven percent of shoppers agree fresh is best when shopping for foods and beverages, which is up three points from 2016 (according to The Hartman Group’s Organic & Natural 2018 and Health + Wellness 2017 reports).”

Alsum agrees, saying, “We’re fortunate to be located close to market. The consumer wants to know where their food comes from, and that’s a trend we have used in our brand marketing.”

Alsum customers want to be kept up to speed on where their potatoes are grown. Many consumers still view the border Great Lakes states, such as Minnesota and Illinois, as local.

“We work hard to inform our customers, and a lot of them are using that information on display placards that are out in their merchandising areas and in the display areas, wherever it’s appropriate,” says Alsum.