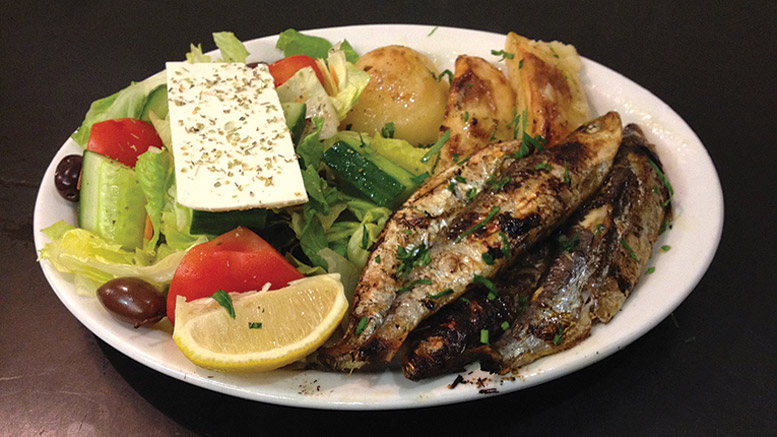 The freshness and authenticity of produce-centric menu establishes a firm foundation for longevity. Cheers!

Yia Sou means “cheers” and is used as a salutation in Greek. Appropriately, Yia Sou Greek Grill welcomes diners to a fresh and flavorful Greek food experience. The restaurant was opened in July 2009 by Manny Chatzidakis, co-owner and general manager, along with his brother, Chris. The restaurant grosses about US$1.88 million in sales per year.

Yia Sou touts itself as a simple, neighborhood place, and its longevity speaks to its value in the neighborhood, which is in the west end of Montreal. “This year, we celebrate 10 years in business,” says Chatzidakis. “We are very proud of this because in this province, it’s hard to maintain a restaurant for that long. We’ve grown into the roots of the community. We see the same faces multiple times a week.”

An essential element of Greek cuisine, produce occupies a crucial place in the restaurant and on its menu. Chatzidakis estimates he spends close to US$2,300 per week on fresh produce. “Greek food lends itself to freshness, simplicity and a lot of produce,” he says. “Approximately 40 percent of our menu has some produce component.”

Chatzidakis emphasizes the importance of quality produce to Yia Sou’s menu. “We must have top quality, because we’re not processing or manipulating the food,” he says. “We can’t fake it or cover it up with a sauce.”

Freshness is a top criterion in sourcing, followed by price. “We try to get the best quality but at a reasonable price,” says Chatzidakis. “The philosophy of our operation is defined in one word — ‘freshness’ — and getting the best produce is a crucial part of delivering what our customers have come to expect.”

The restaurant buys primarily from Végifruits in Montreal but also sources from some of the Montreal market wholesalers. “We will soon be getting our own van so we can go to the market ourselves,” says Chatzidakis. 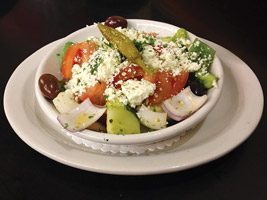 The restaurant prides itself on offering classic Greek, incorporating a wide variety of items from souvlaki to grilled fish all under one roof. “Typically, a Greek restaurant is either a casual souvlaki place or a high-end fish place,” says Chatzidakis. “We offer it all in a neighborhood environment.”

Vegetables are all over the menu, starting with the traditional Greek cold appetizers, including Tzatziki consisting of dill, cucumbers and garlic with yogurt, Kopanisti (a red pepper and Feta puree), and Vegetarian Dolmades. Hot appetizers boast more veggies, including Fried Zucchini Chips, spinach starter Spanakopita, Grilled Portobello, and a Grilled Vegetables medley. The menu offers bountiful salads, including the traditional Greek and Caesar, as well as the Yia Sou House Salad that blends Romaine hearts, iceberg, tomatoes, cucumbers, red cabbage and carrots.

Sea and land entrees are offered with fresh, oven-roasted potatoes. Baked Tilapia or Grilled Salmon use a homemade fresh marinara sauce. The Angus Filet Mignon is accompanied by a lush, red wine mushroom sauce. Bits and bites of onions, zucchini, peppers, garlic and lemon are scattered throughout all the entrees on the menu. Chef’s Specials incorporate produce as particularly showcased in the Creten Moussaka, a layered casserole with potatoes, zucchini, eggplant, minced veal and lamb, topped with béchamel sauce.

Is Data-Driven Worth It?