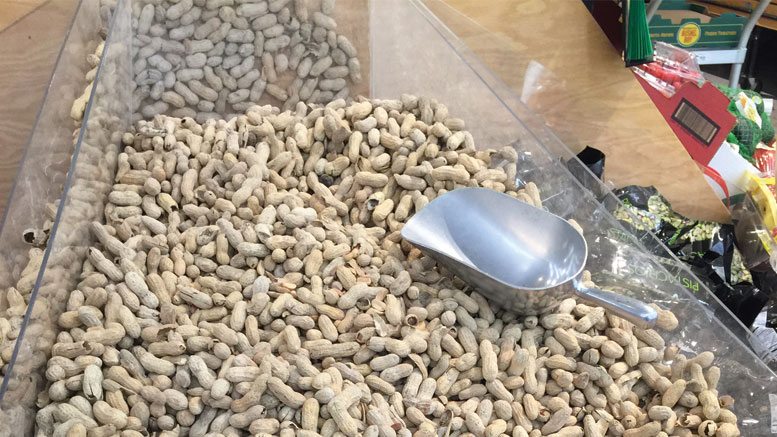 Consumers have more choices than ever, which means produce departments have more opportunities to market and sell them.

When consumers come to produce departments seeking peanuts, the question is no longer, “Do you want in-shell or unshelled?” There are more choices on the peanut shelf than there have ever been. While that means more to keep track of, the produce department also has more opportunities to make a buck from them.

Peanuts continue to be a consistent item on shoppers’ lists, in part because people now consider them a healthy food. “Consumers have increased their consumption of peanuts as a convenient, healthy snack,” says Keegan Treadaway, marketing and communications specialist for the National Peanut Board, a research, marketing and promotion organization based in Atlanta. “Per capita consumption data suggests shelled peanuts are definitely popular because they’re convenient. But in-shell nut consumption remains strong, and new flavored in-shells are adding to their appeal.”

Keith Cox, produce category manager at Food City, an Abingdon, VA-based chain, a division of K-VA-T Food Stores that operates stores in Virginia, Georgia, Tennessee and Kentucky, agrees in-shell peanuts are still king. “More than 95 percent of our sales are in the shell,” he says.

“Certain varieties are more popular in different regions,” says Terry Williams, the company’s vice president of sales and marketing. “In the Midwest and South, sales migrate heavily toward the salted nuts, while in the northeast there is heavier consumption of roasted no-salt peanuts than in other areas.”

Hardy Farms, which is headquartered in Hawkinsville, GA, grows and processes its own nuts, and provides primarily green (raw) and boiled peanuts. These may be unfamiliar to many consumers, but that can make them an appealing item for stores to promote to foodie and trend-watching customers. “As the popularity of boiled peanuts stretches beyond the Southern states, some stores may consider space for bulk green peanuts, which are available in the early autumn months,” says Treadaway.

Shelled peanuts still have a place in the produce department. “We do very well during the Thanksgiving and Christmas holidays with red skin peanuts out-of-shell,” says Cox. “These are used to make peanut brittle, which is a big holiday candy item in our part of the world. We only do bags for easier displaying and a higher ticket ring.”

While shelled nuts have historically done well around the holidays, Treadaway points to a few trends that are keeping sales strong throughout the year. People are using peanuts to make their own trail mixes and other healthy snacks. In addition, she says, “there is room for growth using peanuts as an ingredient in cooking. The surge in popularity of authentic cultural and ethnic cuisines among Millennials is bringing new interest in meals and dishes in which peanuts are a traditional ingredient.”

“I think there’s evidence out there that flavored nuts as a subset of nuts are growing,” says Sanjiv Patel, founder and president of Dallas-based Holy Cow LLC. The company makes Lord Nut-flavored peanuts. There are six varieties of flavored shelled nuts, including dill pickle ranch, spicy bloody Mary, white cheddar and jalapeno, and Thai curry and lemongrass. “People like food with flavors,” says Patel.

Since they’re also looking for healthier foods, flavored nuts seem like a good choice. “The peanut is a great carry because it’s very nutritious,” says Patel. “I think as more brands are doing interesting and exciting things, people are going to turn their gaze [to flavored nuts] and look away from, say, chips.”

Gabe Flores, director of produce operations for Bashas’, a family owned chain that also manages AJ’s Fine Foods and Food City stores and is headquartered in Chandler, AZ, sees good growth in the flavored nut category. “The chocolate-coated nuts are popular; but the other, more popular one is the yogurt-coated nuts,” he says. “They’re fast becoming a strong favorite.”

In-shell nuts can also be flavored. Sachs Peanuts does a Tabasco-flavored in-shell nut. Hardy Farms has a hot and spicy boiled variety. According to its website, Hampton Farms of Severn, NC, markets Cajun hot and hickory smoked nuts. “We are carrying four deep-fried in-the-shell peanuts that have gained some attention from our customers,” says Food City’s Cox. “This deep-fried peanut is meant to be eaten shell and all. This has really intrigued our customers. The flavors are salted, Cajun, BBQ and ranch.” These, along with a hot and spicy nut, represent around 20 percent of the company’s in-shell peanut sales.

There’s one other shift in peanut sales that produce managers should be aware of. “Generally, we see a growing trend in portability,” says National Peanut Board’s Treadaway. “Consumers are interested in purchasing peanuts in resealable, portable and single-serve containers that add to the convenience of an on-the-go lifestyle.”

Flores sees good sales of 4-ounce containers of peanuts. “They make for easy consumption at a desk at a workplace,” he says.

“Fall, winter and around the holidays are always popular times to promote peanuts,” says Treadaway. “The start of baseball season is also ideal to highlight in-shell peanuts as the preferred snack of America’s favorite pastime.”

Indeed, peanut sales seem very closely tied to sporting events. “We have our best sales improvements when football season starts,” says Cox. “Customers like to take them tailgating and to the stands while watching games.”

“Any time you have a national event — for example, the Super Bowl, World Series, major NASCAR events — we see a peak in those markets for in-the-shell peanuts,” says Sachs’ Williams.

Christmas and other winter holidays also bring a spike in sales. But they’re not the only holidays when people are looking for them. “Fourth quarter for all snacks is a definite bump because snacking follows entertaining,” says Patel. “Flavored nuts are really a snacking food, so they do great at times when people are going to put snacks out for parties, including Memorial Day and 4th of July.” Hardy has a different take on when peanut sales do best. “They are more of a warm time of year snack,” he says.

Treadaway backs this up by saying, “Promote peanuts as an ideal snack for camping, hiking and being outdoors.”

When peanut sales are at their peak, following a few best practices can be enough to keep them moving through the department. “Peanuts should continue to enjoy a good amount of space on the produce aisle, especially given the increased demand for healthy, whole foods and plant-based sources of protein,” says Treadaway. “They should be displayed with other nuts, and grocers should consider packing raw or roasted peanuts in a variety of package sizes to provide additional options for customers.”

“Peanuts are an impulse item, so put them in high-traffic areas and make them readily identifiable to the consumer when they’re going through the department,” says Williams. “Using dump bins, breakaway cases and signage to draw attention to the product helps with the product takeaway.”

“Case stack displays always bring an impulse purchase for customers,” says Cox. “Work with store managers on displaying a case stack or clip strip in or near the beer displays.” During slower times, managers may need to get more creative. Doing product demos or sampling events may be one of the best ways to keep peanuts moving. “I firmly believe in passive sampling,” says Bashas’s Flores. “Most of us retailers don’t commit enough to even passive sampling, but if we did, it would increase turns for sure.”

Passive sampling and demos are particularly helpful for newer products such as flavored peanuts. “Any time you have a new item, demos are important,” says Patel. “In the produce section, we see more people having sampling stations. That area of the store is more conductive to trials and sampling.

“Pairing-wise, any time you can show a consumer how to use a product, it’s fantastic,” says Patel. Setting peanuts or flavored nuts near bagged salads, snack items, beer or soft drink displays may speed up sales. “In this day and time you need to point out the health benefits of products because the consumer is more aware and looking for healthy snack products,” says Williams. Use signage and other tools to communicate this information to consumers. “There’s a ton of health benefits to green and boiled peanuts,” says Hardy Farms’ Hardy. “They’re high in protein. They’ve been shown to be great for your heart.” Many of those health benefits extend to all peanuts regardless of how they’re prepared. The legumes (they aren’t actually nuts) are high in protein and “healthy” monounsaturated fat, and contain many nutrients such as potassium and phosphorous.

Price promotions can increase peanut sales during slow times. Williams suggests selling small package of peanuts at 10 for $10, or $.99 or $1.29 per package. “Anything that looks like — and is — a good value,” he says.

The most important part of successfully merchandising peanuts is coming up with inventive promotions. “Have a display contest where managers can be creative based around a theme like the Super Bowl or World Series,” says Williams.

Or encourage managers to try this fun idea: “Setting up a DIY trail mix bar offers a great opportunity to promote peanuts throughout the year,” says National Peanut Board’s Treadaway. “It generally appeals to anyone looking for quick, convenient and healthy snacks.”