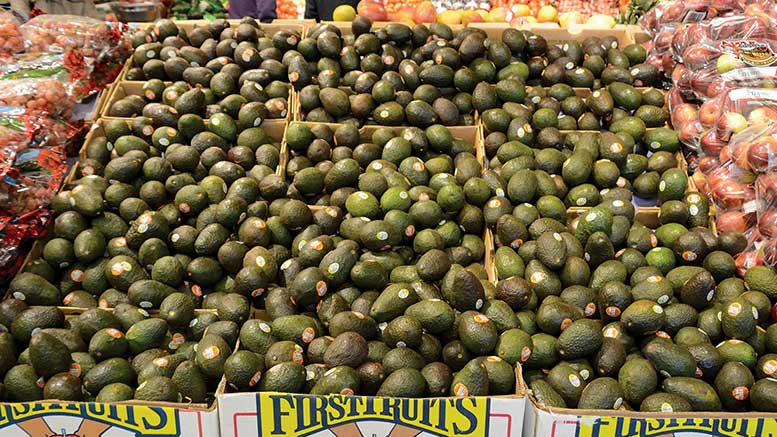 In the past 15 years, avocado popularity has skyrocketed, with Americans enjoying three times as much of the green-skinned fruit as they did in the 2000s, according to the United States Department of Agriculture — to the tune of more than four billion pounds per year.

For retailers, there seems to be no limit to being able to market and sell avocados, which have been lauded for their taste, versatility and health benefits. Being able to move this “superfood” isn’t really a concern; providing enough space for quality avocados year-round is the real challenge.

“On an everyday basis, observing best practices for avocado merchandising is key, especially making sure that ripe avocados are available,” says Jan DeLyser, vice president of marketing for the California Avocado Commission (CAC). “Including avocados in ads and other promotions is helpful, as is inclusion in general market advertising programs and targeted consumer outreach.”

Most retailers throughout the United States are taking advantage of avocados’ popularity by placing them front and center in produce departments or pairing them with other items. But there are still opportunities to drive more sales.

Though consumption of avocados remains steady throughout the year, according to Emiliano Escobedo, executive director of the Hass Avocado Board (HAB) in Mission Viejo, CA, certain periods are stronger than others.

“January tends to be a busy month because of the Super Bowl, and then demand drops slightly in February and bounces back in March for March Madness and Easter,” says Escobedo. “People also tend to start eating out again (and enjoying more avocados) because the weather warms up.”

When consumption is slightly lower, Escobedo says retailers can boost sales by focusing on holidays.

“Avocados are popular year-round, with spikes for the periods of American summer holidays, Cinco de Mayo and Super Bowl.”

The Hass Avocado Board’s Holiday and Events Report, released in June 2017, found that holidays such as Father’s Day, the Fourth of July and Labor Day present big opportunities to grow sales through promotional events.

“Avocados are popular year-round, with spikes for the periods of American summer holidays, Cinco de Mayo and Super Bowl,” says DeLyser of the CAC. “Last year, sales were brisk around St. Patrick’s Day and Easter as well.”

DeLyser says in-store marketing and promotions can help boost bottom-line numbers. “Retailers can take advantage with assertive merchandising that ties avocados to the occasion with displays, signage, recipes and more,” she says. “We work with retailers to create custom programs that can make a difference, including recipes and videos to encourage new usage ideas.”

Despite the upswing in popularity, retailers shouldn’t rest on the laurels of positive trends, according to Paul Chiavacci, a merchandiser for Ahold USA in Carlisle, PA. The quality of the product and sizes offered are still what matter to customers.

“Consumers don’t want their avocados to be hard as a rock,” says Chiavacci. “They shy away from avocados when they’re not ready to eat because they don’t want to have to wait three to four days for them to ripen. We order pre-conditioned avocados that have already started to ripen when they’re shipped so they have a little give by the time they get to the store.”

According to Robb Bertels, vice president of marketing for Mission Produce in Oxnard, CA, “having ripe fruit available all the time is important. For the consumer, it takes the work out of making purchases. Consumers don’t want to have to guess about when the fruit will ripen.”

All of Mission Produce’s avocados are Hass, but they come in a wide spectrum of sizes, varying from 32 to 84.

“It’s important to have a variety of sizes because some consumers like the smaller avocado and some like the larger choices,” says Bertels. “Some consumers like to purchase the single-serving, smaller varieties of avocados and some don’t. It’s also related to uses; some want to purchase larger avocados for guacamole and some want the smaller varieties to slice up and put on a hamburger.

“It’s important retailers have a wide variety to meet the consumers’ needs. Having different-sized avocados in one display is also appealing to consumers when the variation in size is large enough.”

Another avenue for growth, says Mary Ostlund, marketing director at Brooks Tropicals in Homestead, FL, is marketing new kinds of avocados. “Grow the category with a different variety like the Slimcado [a large Florida avocado that has a bright green color],” she says. “Big displays sell fruit. The exception may be big displays of dull brownish green avocados. Break up the lack of color with the light-green of the Slimcado. This avocado also provides contrasting shapes and textures.”

Health, says Escobedo, is also a big driver of sales according to data that HAB gathered from consumers. Avocados contain an abundance of antioxidents, nearly 20 essential nutrients including vitamins E and C, and the fruit is cholesterol-free.

“According to our data, being good for you and taste are the two biggest drivers for consumers,” says Escobedo. “And fat is no longer a barrier. Consumers who are concerned about wellness, preparing meals from scratch at home and leading an active lifestyle are buying a lot of avocados.”

Bertels says the health factor is huge. “The fruit can now carry the ‘heart check,’ meaning it’s considered a heart-healthy food by the American Heart Association. It’s also been designated a ‘superfood’ by the USDA and the serving size has increased from 1/5 of an avocado to 1/3, and it’s still less than 100 calories.”

DeLyser says supermarket dietitians can play a huge role in marketing the healthy aspects of avocados. This year, the California Avocado Commission created a recipe booklet certified by the American Heart Association filled with heart-smart recipes using California avocados that is good for retail displays. The Hass Avocado Board offers similar recipes on its website.

DeLyser, Bertels and Escobedo say appealing to moms and kids is a great way to further expand this market.

“Years of dietitians and others promoting to young parents the value of avocados as a fresh, easy and nutritious baby food are paying off,” says DeLyser. “While we do have some marketing tactics directed just for kids, we believe the more fruitful approach is to share nutrition news with young parents and adults of all ages.”

“Avocados are the perfect texture for kids, and they’re so healthy,” says Bertels.

Escobedo says price isn’t the barrier it once was, but it still plays a role. When supply goes down and the prices go up, it does impact consumption. DeLyser admits it’s not completely clear what consumers are willing to pay for premium avocados.

“Last year was the first year in recent memory that aggregate avocado volume available in the United States was less than the prior year,” says DeLyser. “With lighter supply in the market and strong demand, the prices were generally higher, and one of the learnings the industry had was that conventional wisdom about price barriers and price points is changing. Shopper demand continued to be strong even with higher price points.”

Ahold’s Chiavacci says that price does have an impact. “When avocados are priced at 10 for $10 they sell the best, but they also sell well when they’re priced at three for five,” he says. “When we have a little less volume, the price tends to be higher.”

Chiavacci says retailers can boost sales by cross-merchandising, such as putting avocados near guacamole packets in produce.

In addition, the California Avocado Commission has come up with a number of new recipes certified by the American Heart Association, says DeLyser. The organization has developed a series of recipe videos showcasing iconic California recipes. “We also will promote recipes showing how well avocados work with the myriad cuisines that are a part of the California food scene. Our foodservice team helps increase avocado demand by developing menu ideas for foodservice chains and other operators.”