All Photos Courtesy of Café Sunflower

According to the most recent statistics from the Washington, D.C.-based National Restaurant Association, in 2011 there were more than 16,000 eating places in Georgia, and these restaurants were estimated to register $16 billion in sales in 2013. Restaurants accounted for almost 380,000 jobs in the state in 2013, with projected job growth of 14 percent by 2023.

This healthy climate resulted in a number of produce-centric eateries in the city in recent years.

A noteworthy Atlanta restaurant with a menu centered around produce is Café Sunflower, which opened in 1994.

When Café Sunflower first opened its doors, business was slow. Many residents were leery of vegetarian fare, says Sun, fearing it was flavorless and boring. Bringing his experience from the other restaurant concepts, along with a French chef, Sun set out to change that perception. 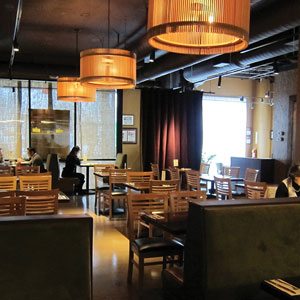 “Now, we even have chefs from different restaurants in the city coming here to eat,” says Sun. The restaurant was so successful that a second location opened in the Buckhead neighborhood in 1996.

The romantic ambiance of this location is the antithesis of what many would expect of a vegetarian restaurant.

“I try to use special produce that is not as popular with customers, like Asian cabbage and kimpora carrots, along with traditional vegetables like zucchini, broccoli and mushrooms,” says Sun. “We design each dish to include a protein, starch and fiber.”