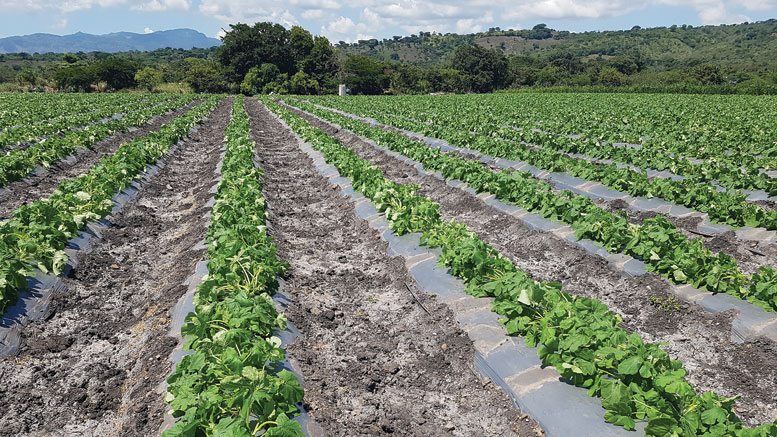 Produce imports are on the rise, as this region helps supply America’s fruit and vegetable needs during the fall and winter months. 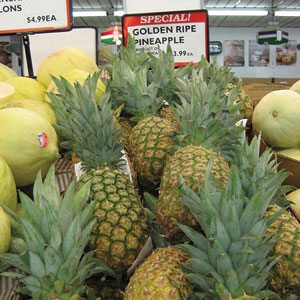 Since the Central American Free Trade Agreement (CAFTA-DR) was implemented on a rolling basis between the United States and six Central American and Caribbean trading partners, agricultural imports from this region have been on the rise. The agreement was instituted with El Salvador, Guatemala, Honduras and Nicaragua in 2006; the Dominican Republic in 2007; and Costa Rica in 2009.

From 2006 to 2014, U.S. imports of agricultural products from these countries increased 72 percent to $5.3 billion, according to the USDA Foreign Agricultural Service. U.S. imports consist primarily of bananas and other fruits, which, along with coffee and sugar, comprise three-fourths of the total. Guatemala and Costa Rica are the largest suppliers, accounting for two-thirds of U.S. imports from the CAFTA-DR region.

In terms of total bilateral trade, the CAFTA-DR region is the sixth-largest U.S. trade partner in the world, after Canada, Mexico, the European Union, China and Japan, according to the USDA. Central America’s fresh export crops comprise myriad vegetables and a more limited assortment of fruits.

“Guatemala is by far the most diversified country in terms of fresh vegetable production, followed by Honduras and Costa Rica,” says Mauro Suazo, president of Suazo Agro International, LLC, based in Pompano Beach, FL. “Nicaragua and Panama present a more limited offering, and El Salvador basically exited the export industry except for as a well-established Persian lime exporter.”

“Thus, value-added processing and packaging are being accomplished at origin under great sanitary conditions and that trend is expected to continue moving forward,” says Suazo. “In addition, due to the new USDA and FDA regulations, much care and attention is being paid to food safety and traceability.”

Honduras continues to be a major melon and watermelon player in southern Central America. This region also is experiencing a trend toward okra production of both American and Hindi varieties.

“The estates of Choluteca and Valle in southern Honduras present an ideal warm and sunny climate to grow okras of superior quality,” says Suazo. “All okras are grown on drip irrigation and brought in after harvest to state-of-the-art pre-cooling facilities.”

In the middle of Honduras in the Comayagua and La Paz Valleys, importers say a thriving greenhouse industry has been established for producing slicer, mini and seedless cucumbers; colored peppers; and other  greenhouse-grown vegetables. There also are open field peppers and cucumbers being grown in considerable qualities.

“The Oriental vegetable industry is a very important source of employment in these valleys, earning foreign currency for the country, as well,” says Suazo. “It has struggled this past year due to El Niño’s adverse weather conditions; however, little by little the Oriental veggies industry in Honduras is recuperating to a healthy status, both from an economic and production point of view.”

Central American produce is ideal to promote during the fall and winter, when local fruit and vegetable availability is limited. In terms of variety, there are many importing opportunities from the Central American region. Two of the main items Pompano Beach, FL-based Ayco Farms imports from this area are asparagus and melons.

“In terms of asparagus, Peru (South America) is the main growing region for this item,” says Dan O’Connor, Ayco’s vice president of sales. “As shopper trends change and the holiday season arrives, cooked vegetable items come to the forefront, and asparagus is highly profitable to promote and grow sales.”

“As shopper trends change and the holiday arrives, cooked vegetable items come to the forefront,and asparagus is highly profitable to promote and grow sales.”

The dynamic of melons is different, as these products have a longer growing season that lasts from November through May, with Guatemala as the main growing region. Ayco Farms is part of the Rainforest Alliance, a non-governmental organization working to conserve biodiversity and ensure sustainable livelihoods by transforming land-use practices, business practices and consumer behavior.

“We’re taking innovation and leading the way for suitable wages and sustainable housing, and the consumer response is fantastic,” says O’Connor. “Now that we have a more educated shopper base, they’re seeking out that information.”

“We are also selling the products in whole form and fresh-cut to retailers, wholesalers and foodservice channels,” says Dionysios Christou, the company’s vice president of marketing, Miami-based Crystal Valley Foods has been importing specialty vegetable products from Guatemala for more than 20 years. Its focus continues to be on French beans in bulk and value-added packages; yellow beans in 8-ounce microwavable bags; snow peas and sugar snap peas in 10-pound-bulk pack cartons as well as 6- and 8-ounce microwavable bags; shucked English peas in 1-pound and 6- and 8-ounce packages; baby squash in 5-pound cartons and 8-ounce retail bags; and baby carrots in 5-pound vacuum bags, 5-pound extended shelf life bags and 8-ounce retail bags.

In addition, the company imports blackberries and Oriental vegetables seasonally from Central America and established a private label packing business of specialty vegetables in the last decade.

“We’re packing a full line of specialty vegetables for third parties for delivery at both our Miami and Los Angeles warehouses,” says Rick Durkin, director of business development at Crystal Valley Foods Carb Americas in Fort Lauderdale, FL, is mainly importing mangos out of South America’s Brazil and Peru, but brings these items in from Guatemala and Nicaragua at the end of February and end of March or early April, respectively.

“Mangos are growing in traction as a mainstream food item year-round,” says Danny Pollak, who handles Carb Americas’ sales. This is not the only on trend fruit that’s regularly imported from the region. Pompano Beach, FL-based Central American Produce Inc.’s company-owned farm in Guatemala will be harvesting seedless watermelons again this year. The first shipments are expected to arrive in the United States in late December.

“Last year’s crop showed outstanding quality, and we are going to see an increase in production this season,” says Shannon Barthel, marketing director. “We grow in a remote region of the country with a unique climate and rich volcanic soil.”

Along with popular fruit varieties, Central American tropical produce, such as chayote, calabaza and yuca, are available almost all year-round in the U.S. Chayote, often used as a vegetable in dishes, is a staple in many Latino, Asian and Pacific Rim cuisines. It’s also popular in Louisiana, where it’s referred to as mirliton.

“Latinos will make soups out of it, cut it in half, and broil it in the oven topped with cheese,” says Mary Ostlund, marketing director at Brooks Tropicals, LLC, headquartered in Homestead, FL. “Chayote is added to many recipes like a potato, such as in casseroles and soups, but it is considered much more nutritious.”

Another tropical import, calabaza, is a hybrid pumpkin/squash that adds both a sweet and hearty element to Latin American soups and stews. “It’s high in potassium, along with vitamins A and C,” says Ostlund. “Plus, calabaza is low in calories and has half the starch of other similar vegetables like corn and potatoes.”

Brooks Tropicals sells a variety of calabaza that is Cinderella-coach shaped or roundish, which is easier to cut. Yuca, a low-fat tropical potato, is a good source of carbohydrates, vitamin C and manganese.

“It has three personalities,” says Ostlund. “Boiled, it’s soft and sticky, while fried, it’s sweet and crunchy. Like zucchini, when it’s baked, yuca gives breads and cakes a mellow, but sweet taste.”

Many produce trends come out of Central America. This is due to the region’s variety of microclimates that allow production of several products in addition to the traditional tropical produce. The latest development is the implementation of tropical roots projects and other tubers.

“The most recent trend in Honduras has been toward the calabazas or pumpkin production; Arjuna, Fair Lady and Kabocha varieties are now grown in addition to the traditional Butternut, Spaghetti and Acorn squash varieties,” says Suazo. “A thriving sweet potato industry is also showing healthy growth for exports, but mainly to the U.K. and EU markets.”

Nicaragua continues to work with quality okras and tubers, but volume has been steady and no major increase in acreage is expected, according to Suazo.

Costa Rica continues to do well with tubers, mangos and golden pineapples. “This year has been a challenging one for cran-pineapple production due to adverse weather,” says Suazo. “Summer is over, and more organized production is expected in Costa Rica with fresh pineapples.”

In addition, Costa Rican melon production continues at the same acreage as in previous years, with distribution mostly dedicated to the U.K. and EU markets. “The United States should be a destination, but between Honduras and Guatemala, the melon market is being cornered,” says Suazo.

In terms of new products, Ayco Farms is experimenting with proprietary varieties, such as the Orangecello melon, which is a higher sugar variety than traditional types. It is the second year the company has been offering this product.

“Many are offering brix scores of between 11 and 12 percent, but no one is speaking about consistency, because these are new and proprietary varieties,” says Ayco’s O’Connor. “This year, we have more of this fruit avail-able, which offers a different experience than traditional cantaloupe.”

Carb Americas worked with the National Mango Board to promote the fruit and has seen success with the growing Latino population and foodies looking for a change of pace. “Mangos are the No. 10 fruit in the United States, so there is a lot of room for growth,” says Pollak. “There also has been a lot of buzz about dragon fruit out of Nicaragua, but this is such a niche market and prices are so expensive.”

Many importers like Carb Americas are contending with the Food Safety Modernization Act (FSMA) and instituted a full-time food safety staff member to navigate the new laws that are currently being implemented. “The challenge is obtaining the highest quality product that’s on the water for seven to 10 days,” says Pollak.

Carb Americas, which offers sugar snap peas and snow peas from Guatemala year- round, has processing facilities in Guatemala and Nicaragua to eliminate waste in a sustainable program. “This minimizes waste of product that doesn’t adhere to our export quality,” says Pollak. “We can instead process and freeze these products for sale.”

Central American Produce continues expanding its hard squash program from Honduras and Guatemala. The company also will have both Butternut and Spaghetti squash available from late December through early May.

“We also are planning an increase in our honeydew and cantaloupe program from Honduras,” says Barthel. “The weather has been good, and we’ll be shipping into South Florida every week and to Houston or Philadelphia upon request.”

Beside packing in its CAPCO Farms label, the company will also be offering its Eat Brighter! brand squash, watermelon and honeydew.

Overall, Central America is healthy, and experts say its export industries  benefited from a strong dollar. Also, freight rates have, for the most part, been stable. In addition, Honduras and Guatemala reconnected with Europe via a new service operated by the European Seatrade Shipping company sailing under a different banner.

Still, Central American importers are contending with a number of issues. For example, traditional crops, such as bananas and plantains, experienced challenges. Yet, since these are mature industries, nothing major is expected to happen.

As a result, the agro exporters look for alternative crops to grow, with a trend toward creating more diversified baskets. For example, Ayco Farms tests more than 50 varieties of Central American products annually. In particular, watermelon sales are on the rise due to new efficiencies in growing and increased customer demand.