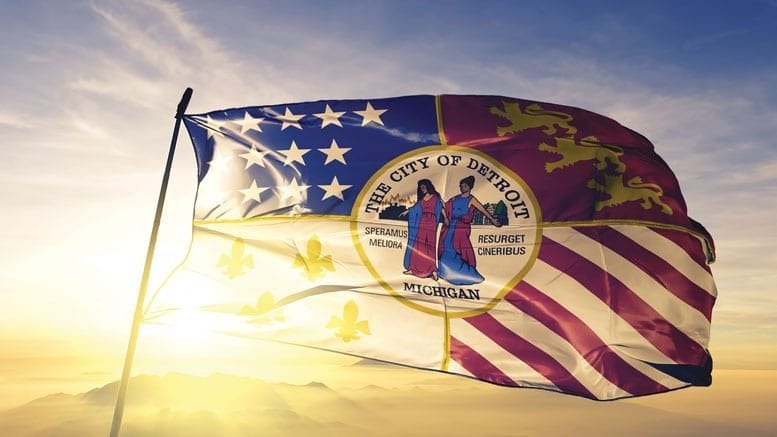 A once proud industrial giant of the midwest is staging a comeback.

The resurrection of the Detroit Restaurant Association two summers ago embodies the spirit of a city busy being born again.

The Detroit Restaurant & Lodging Association, as it has come to be named, represents a three county hospitality industry of nearly 900 eating and drinking establishments, employing 11,600 people and bringing in nearly $700 million in annual revenue.

There is a powerful loyalty that survived decades of decline and strife as evidenced when retired attorney Larry Charfoos said, as he led the resurrection of the Restaurant Association, that he had participated in the 1967 riots because he lived in Detroit.

“Detroit has turned the corner,” says Nate Stone, who handles special projects at Ben B. Schwartz & Sons, Detroit. “There’s a waiting list for real estate in some areas of Detroit; Detroit’s got nothing but momentum. It’s unfortunate Detroit became a sound bite on the news for a long time. Detroit produce became vital a long time ago, and everyone is just opening their eyes to realize it. I think it’s limiting to say just Detroit, or just the metropolitan area. It’s broader than that. ”

Long-standing leaders in the wholesale produce business, however, found ways to continue and even expand their businesses during the extended slump.

“Even when Detroit was going through hard times wholesalers, who knew what they were doing, were growing their businesses,” says Stone. “You’re going to reach as far as you have to. We go as far as the customer is. We also do quite a bit of chain store business. They ask for rapid response to their needs.”

Since the turn of the last century, Ben B. Schwartz has wholesaled a full range of fruits and vegetables from its facility at the Detroit Wholesale Market.

After he arrived from Italy 60 years ago, Leonardo Maniaci began selling produce door-to-door in Detroit. Today the company that bears his first name is run by his son Sam, who has built the firm into a 20-truck operation that offers a broad range that includes fruits, vegetables, fresh squeezed juices, local Michigan produce, Mexican specialty items, frozen foods, cheese and other dairy products.

“Our priority now is the independents and smaller chains,” says Jeff Lillard, information technology manager at Leonardo’s Produce, Detroit. “We go all over Michigan. We sell a multitude of items from avocados to oranges, or apples to asparagus. We sell it all.”

With its own fleet of trucks, Leonardo’s has developed the logistics to deliver six days a week throughout Detroit, much of Michigan, and the nearby Toledo area.

The produce wholesalers and middlemen, some of whom can trace their roots in the business back a century or more, survive by adapting to a different mix of opportunities.

“Our business is constantly evolving, nothing is ever stagnant….with every change comes opportunity,” says Dominic Riggio, president of Riggio Distribution Company, Detroit. “We have seen both consolidation and expansion in retail; there is opportunity in both scenarios. Detroit is a quality driven market. It can be tough on price, but the foundation of any sustainable business in this market is quality.”

Riggio uses a fleet of refrigerated trucks to service the Midwest from its location at the Detroit Terminal Market. The company has added customized packing, retail planning and merchandising help to its list of services.

“The Market is definitely more diverse with many ethnicities, generational differences and evolving eating habits,” says Riggio. “Our ethnic markets are alive and well. They do have some geographical overlap, but for the most part they continue to operate in the same neighborhoods where they have traditionally had success.”

Four generations ago, Jack Russo began selling produce in Detroit after arriving from Terrasini, Sicily; his sons Rocky and Dominic continued the business in a facility at the city’s Eastern Market after they returned from service in the Korean War; their sons expanded the business; and the fourth generation has since joined Rocky Produce.

“We have a large base of independent retailers,” says Dominic Russo, buying and sales director at Rocky Produce, Detroit. “We have a lot of independents walking the floor at the Wholesale Market looking for good quality and prices. We open up at midnight and they come at two in the morning. The guys who walk the floor work hard at what they do, and we’ve learned with them.”

One of the locals walking the Market is Randazzo Fresh Market, which opened its first store serving the city’s east side neighborhood 47 years ago, and has since added stores in Macomb, Clinton and Warren.

Nino Salvaggio International Marketplace also walks the Market for fruits and vegetables for its group of five stores that promises a variety of premier specialty produce.

Another regular at Rocky’s is Papa Joe’s Gourmet Market & Catering, a local company that operates six stores in the area.

“We have a good customer mix, a good base,” says Russo. “We sell to both retail and foodservice, and the ratio has stayed the same for quite a while. The big box stores source their produce direct, but we’ve always done a great job for them. We fill their ‘shorts’.”

The network of longstanding Detroit area independents gives Rocky’s a solid base that they can build on to serve a wide range of produce customers. Many of Rocky’s customers are particularly interested in fruits and vegetables from nearby Michigan farms.

“Everything is going well; we had an excellent summer,” says Russo. “Locally grown produce is in demand, and everything looked good this summer after a tough spring.”

Many of the growers who produce this bounty sell their harvest in a farmers market that can track its ancestry to the 19th century, when the Eastern Market was established in Cadillac Square for sales of hay and firewood.

The Eastern Market has since moved a mile northeast from the heart of downtown, where its 43-acre, six-block site serves as home for more than 150 produce and specialty food businesses, and includes both wholesalers and three weekly farmers markets.

More than 225 vendors sell their goods to crowds that can reach 40,000 and more at the Saturday market.

“Our markets are at the core of what we do,” according to the Eastern Market website. “These markets consistently draw guests from Detroit, its surrounding cities and all over the world. Crowds of thousands gather together around the goal of becoming healthier, wealthier and happier. Each of our four primary markets has a unique set of foods, products and experiences to offer.”

The state supports local produce through the Pure Michigan program, which began in 2006 as a tourist promotional effort, but expanded six years later to also embrace the fruit and vegetable industry.

“People are advertising local sourcing, but that’s not new for Ben B.,” says Stone. “We are in the middle of a season for Michigan and Northwest Ohio. It remains an important part of what we do.”

In Detroit, unlike any other U.S. city, local applies to two countries.

“Canada is important going both ways,” says Stone. “We have customers in Canada, and growers that we source from. The only thing that separates us is a river and a bridge.”

Detroit is linked to Windsor, Ontario by a magnificent modern bridge that can be crossed in less than 10 minutes.

“The Gordie Howe International Bridge project is the largest and most ambitious trade infrastructure project along the Canada-United States border,” according to the Detroit Chamber of Commerce.