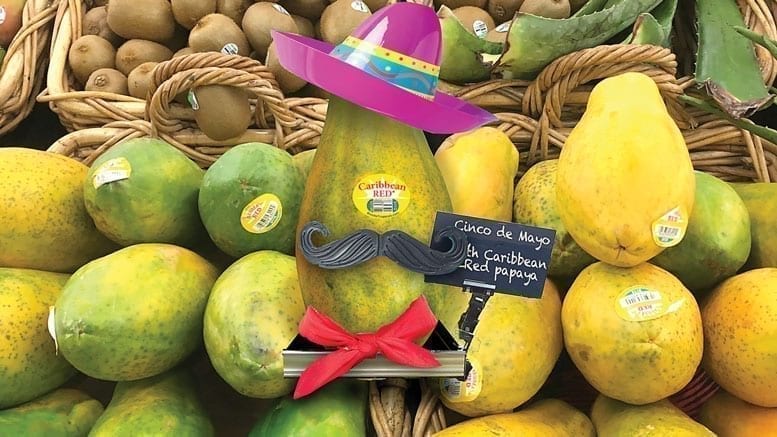 Savvy merchandising, offering plenty of opportunities to buy, is best.

Cinco de Mayo has become one of America’s favorite fiestas as the Hispanic population booms and other cultures in all major cities embrace the party occasion. Established to mark Mexico’s victory against the French in the Battle of Puebla on May 5, 1862, today Cinco de Mayo in the United States is as much a holiday for having fun with friends and family, where festivities center around traditional Mexican food and drink.

“Cinco de Mayo is an Americanized holiday, and certainly not just celebrated by Hispanics,” confirms Robert Schueller, director of public relations at Melissa’s Produce in Los Angeles. “It’s a major holiday in celebration of Mexican heritage that is being embraced by Americans and other cultures alike. There’s an appreciation of traditional meals, and that is what is most evident beyond popular cocktails and drinks.”

Although the primary shopper remains Hispanic, all Americans love a party, says John Chamberlain, vice president of marketing at Limoneira in Santa Paula, CA. “This holiday that was initiated by Hispanics has now become integrated into calendars for all U.S. demographic groups,” he says. “Advertising, sponsorship and promotion of Cinco de Mayo events have enabled businesses to tap the young consumer market.”

Considering celebratory dishes feature a broad range of typical Mexican fruits, vegetables and herbs, the opportunity to drive produce sales and to boost retail revenue is clear. As they prepare guacamole, salsas, salads, pozole, tacos, tamales and even cocktails, shoppers will be looking for ingredients from avocados, chillies, cilantro, onions, tomatoes, mangos, lemons and limes.

“Cinco de Mayo is a quick holiday where retailers can gain incremental sales without having to spend too much time on it, unlike other spring holidays such as Passover and Easter,” explains Alex Berkley, director of sales at Frieda’s in Los Alamitos, CA.

Schueller goes as far as to say that Cinco de Mayo is one of the best Hispanic produce selling times of the year for Melissa’s, along with Christmas, Easter, Day of the Dead and Mexican Independence Day. “We have seen typical 12-16% growth in the Hispanic produce category, especially during the four weeks leading up to May 5,” notes Schueller.

Product-wise, Cinco de Mayo is the second-largest holiday for avocados, after the Super Bowl, notes Chamberlain. “Americans eat a staggering 81 million pounds of avocados on Cinco de Mayo,” he points out. “The average retailer will promote avocados 24 times throughout a year, but 90% of retailers will promote this particular week.”

Stephanie Bazan, vice president of trade and market development at Avocados from Mexico (AFM) in Irving, TX, says U.S. consumers purchased 22% more avocados during the week of Cinco de Mayo 2019 versus the prior week, and bought 5% more the week after, according to an AFM calculation based on data reported by Nielsen Retail Index Service.

“According to [Chicago-based research firm] Numerator [basket affinity report from 4/26/2019 to 5/5/2019], we found that the 10 days leading up to Cinco basket ring with avocados is $66.47, compared to $32.69 without avocados,” says Bazan. “As a result, it is very important to focus on driving in-store efforts that will increase basket ring.”

Similarly, Frieda’s registers an increase in sales of key limes, jicama and Anaheim chillies, in particular. “All of these items lend themselves well to cocktails, snacking, salsas and more,” notes Berkley.

Tammy Wiard, who is responsible for retail marketing at the National Mango Board (NMB) in Orlando, FL, says mangos are naturally paired with many of the holiday’s popular dishes, particularly salsas and guacamole. “Cinco de Mayo is a great holiday for mangos,” she says. “Because the majority of the mangos in-store during this holiday period comes from Mexico, it is a nod to the Mexican heritage.”

“Limes play an important holiday role, so they’re in high demand,” she notes. “With the crop typically being in a transitional period, they are certain to be at a premium. Avocados are tight in early May. Florida is just starting, and the Dominican season is waning. May’s seasonal rains in Florida kick off what should be a great summer for our tropical avocado, the SlimCado. For papaya, our Caribbean Reds are in high demand.”

Chamberlain of Limoneira notes the USDA has been encouraging Americans to make the Cinco de Mayo celebration a ‘Citrus de Mayo’ affair by celebrating the role of citrus in the holiday’s food and culture. “From the limes, lemons and oranges used to marinate the carne asada, and the lemon we squeeze over our guacamole and tacos to bring out the flavor, to the delicious margaritas and the lime and lemon wedges with which we top an ice-cold beer, citrus is at the center of the festive Cinco de Mayo event,” he emphasizes.

“Caribbean Red papayas can be sliced and topped with salsa, creamy toppings and so much more,” she explains. “Papayas are also diced for salsas of their own making. Display one papaya with a small sombrero and a multi-color blanket with suggestions for topping and combining.”

Equally, mangos are a great way to elevate dishes, points out Wiard who suggests shoppers add fresh-cut mango, especially Haden or Tommy Atkin, to pre-made guacamole or salsas. Plus, with consumers more willing to try different mango varieties and flavors, NMB encourages retailers to offer multiple varieties, sizes, and prices to provide choice. “During the Cinco de Mayo season there are three varieties readily available: Honeys, Hadens and Tommy Atkins,” says Wiard, adding that the creamy Honeys are “perfect” for sauces and snacking.

Avocados are equally versatile, says Ostlund. “Our tropical avocados brown much slower than Hass, so this avocado is sliced to top salads, quartered for grilling, diced for pestos and salsas, and of course, mashed for guac,” she says. “Display right next to your Hass avocados for your customers to realize the much bigger size. Let the consumer know it’s slower to brown. Also, add a helpful tip to your lime displays — to get the most juice out of a lime, roll it with your hand on a hard surface to loosen up the insides.”

With most retailers embracing Cinco de Mayo, suppliers suggest a plethora of merchandising tactics to illustrate this holiday; from price promotions, signage and decorations to large bulk displays, sampling, cross promotions and recipes.

“A week before the holiday, displays should be up, full and fresh,” advises Berkley of Frieda’s. “Many shoppers come in the day before, or on the same day to grab what they need for a quick celebration. Items that are great for salsa, guacamole and margaritas should be put on ads or promotion during this time to really capture the potential volume during this quick holiday.”

Schueller from Melissa’s recommends retailers merchandise key produce destinations, such as tomatoes, chilies, onions, cilantro and avocados, in the two weeks leading up to the holiday. Signage and decoration should be visible two to three weeks before promotions, while ad pricing and store circular promotions for ingredients should be available four to five weeks ahead. Lastly, he advises that salsa and/or guacamole sampling stations be positioned during the two weeks prior to promotions.

Indeed, Schueller says in-store sampling around Cinco de Mayo can yield higher and incremental sales in the produce department. In particular, he advises sampling tomatoes, tomatillos, avocados and chilies. “It’s an opportunity to bring in more varieties of chili peppers and other Hispanic ingredients that a store doesn’t necessarily offer year-round, such as papayas, mangos, cactus pears, coconuts, etc.,” he explains.

As mangos move to the mainstream, NMB says they need to be pulled to the front of the department. “From a merchandising perspective, we encourage placing mangos with citrus and seasonal fruit to help shoppers think of them as an everyday item with year-round availability,” advises Wiard.

Equally, in-store bin displays are a key resource to promote mangos since they provide a more permanent location for shoppers to easily find the fruit. For 2020, NMB is producing seasonal headers for bins, with one designed to promote Cinco de Mayo.

“Our retailers have seen an aggregate lift of more than 40% when using the NMB- provided in-store bins,” notes Wiard. “By placing the bins at the front of the produce section, the produce team can create excitement and encourage impulse buys, creating incremental sales.”

According to an AFM internal study, approximately 74% of shoppers would buy more avocados if they saw more displays around the store. “Produce departments should consider creating fresh guac stations and sampling fresh guacamole to drive consumption and sales,” advises Bazan.

To cross-promote ingredients for traditional recipes, Ostlund at Brooks Tropicals suggests tapping into the light-hearted, attention-grabbing element of Cinco de Mayo displays. “Capture the fun in every angle from limes in the beer aisle, to center store items in Cinco de Mayo produce aisle displays, to center store combo displays that say and carry it all,” she notes.

Limoneira’s Chamberlain agrees. “Cinco de Mayo, as celebrated in the United States, is about fun, and retailers do a great job with merchandising that conveys a sense of fun and encourages entertaining,” he says. “It’s a perfect opportunity for colorful produce displays.

Berkley of Frieda’s says focusing on cross-merchandised ingredients in a recipe would truly drive sales. For example, offer tomatoes, onions, jalapeños, tomatillos and cilantro in the same area to make salsas.

“Creating a destination, focused around a recipe, is a great way to merchandise these key ingredients,” say Berkley. “Providing a sign with a recipe that a shopper can take a photo of with their phone is a perfect way to up-sell every item on the display as well.”

Additionally, AFM’s Bazan says Cinco de Mayo 2020 is unique because it falls on a Tuesday. “This presents a great opportunity for retailers to promote Cinco in conjunction with a Taco Tuesday thematic,” she says. “It will allow for retailers to create a bigger in-store event and cross promote with other items that drive overall avocado basket ring. “

To maximize the long-term impact of Cinco de Mayo, Melissa’s Schueller advises retailers move beyond guacamole packs and margarita mixes and toward encouraging shoppers to make their own by offering large, fresh displays of the key produce items. “The holiday will teach consumers about delicious Latin produce they can enjoy all year long,” he points out.