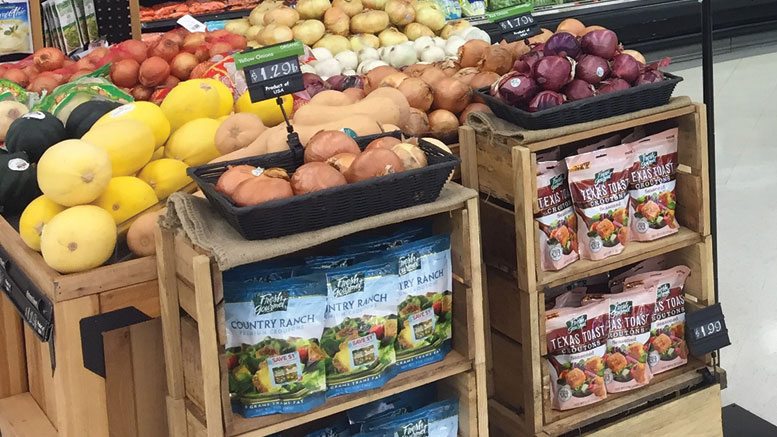 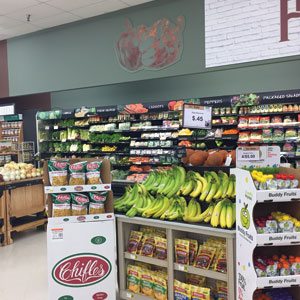 The newest store opened by a Tar Heel state retailer attempts to break through to shoppers seeking natural foods products sold inside a regular grocery store.

Fresh produce is a key focus of the hybrid location, which is about an hour and 15 minutes’ drive northwest of Charlotte. The store’s clientele includes former discount grocery shoppers, as well as health food customers who previously drove 30 minutes to the nearest natural foods store.

The prominence of the produce department is evidenced by the store’s layout. As shoppers enter the store, colorful and attractive produce is the first to greet them. As they walk through the produce aisles, the wellness or health department is situated behind produce on the left, with bulk foods to the right. Deli and bakery are in the back corner on the right. A seating area is situated between deli/bakery and the meat department. Grocery is in the middle of the store with dairy and frozen; alcohol is on the store’s opposite side.

The produce area features new elements that weren’t available in the older store, including organics, a juice bar, a smoothie bar and a salad bar. Fresh items are located along the prominent side of the store where people enter. “Our fresh products greet shoppers as they walk into the store,” says Hartman. “To be able to show people new and unique produce items and special offerings is extremely important as they walk into the store. If the first thing people see is a dirty produce department, they will walk out. It’s nice to be able to walk into a clean and well-kept department to see something new rather than the same-old-same-old. We are hoping this captures what people want in a store.”

The traffic pattern creates a mixture of what shoppers are used to and adds new items, as well as the deli and meat areas, which represent a natural flow in most stores. In between, the wellness and bulk foods areas are sprinkled in for value. Natural foods customers can quickly see past the rectangular-shaped produce area and view the products they seek, while traditional shoppers can see the items they’re use to placing in their shopping carts, as well as new offerings. “We want to have that ‘personality of expertise,’” says Hartman. “We want people to come in and feel welcome to ask questions about produce and their health benefits.”

Organics are marketed separately, using signage to identify the category’s products. “Organics are important to us,” says Hartman. “We feel there’s a certain segment of society who wants it. We want to be able to provide a choice.”

The inclusion of organics helps attract new customers. Specialty produce and tropicals, including dragon fruit, yucca and roots, are merchandised in a separate produce department section and experience consistent movement. 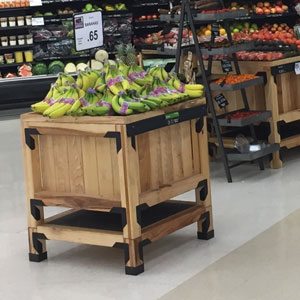 growers, including highly popular cherry tomatoes. During a grand opening day promotion, the local tomatoes quickly sold out. Hartman says he expects to heavily promote both the region’s and state’s produce, including apples, blackberries, blueberries, strawberries, watermelon, potatoes and sweet potatoes. “Anywhere we can get the best and freshest product, with an emphasis on local, is our sourcing strategy,” he says.

The company opened its first store, a natural foods store, in 1979, in the Plaza Midwood part of Charlotte. Its Davidson, NC, location, also a natural foods store in the Charlotte area, is transitioning to the natural foods-grocery hybrid. Jerry York and his wife, Betty, the chain’s original owners, operated Tropical Nut & Fruit Co., a Charlotte wholesaler of snack mixes, roast nuts and dried fruits. The couple opened the stores to supply themselves a built-in large customer base and to give their company more of a community presence. Their daughters, Angela Bauer and Carolyn Bennett, now own the company.

Lenoir represents a typical rural North Carolina town, but at the same time includes technology jobs from Google’s data center and other high-tech companies that employ many of the city’s 18,028 residents. Located on the town’s main road, it is surrounded by some established neighborhoods just south of the city’s downtown.

The store’s competitors include local grocers, as well as Food Lion and Wal-Mart. During the store’s grand opening week, it sponsored some aggressive pricing promotions to attract shoppers. The promotions highlighted produce and the outside advertising focused on common produce items, including bananas and berries as “hot deals.”

“Produce is doing well at the store,” says Hartman. “For this particular store, what we want to do is give people choices. We want shoppers to come to our store, experience our educated staff and make choices on what they want to eat. If they want to buy traditional groceries, that’s fine. If they want to try to start eating healthier through organics, we can help them with that journey. For us, it’s more about offering them choices and helping them walk through if they want to change their eating habits.”

While produce is merchandised in the outer rims of the section, produce pods placed throughout the department merchandise a variety of items. Pods may include a mix of berries or apples and oranges. The department also cross-merchandises produce with non-fresh items. Salads are cross-merchandised in the pods with carrots, croutons, dressings and nuts, while non-fresh items, including dessert items, fruit dips and smoothie mixes, are also paired with produce. “Anytime there’s a clear companion item, we do that,” says Hartman.

The store also uses electronic scales and vegetable misters. An electronic kiosk in the produce department provides recipes and other information on produce items. Signage is designed via templates to provide a clean and consistent look throughout the department. A large wet rack displaying bulk vegetables stretches 40 to 50 feet along the wall.

In addition to the juice, smoothie and salad bars, Farm 2 Family Foods also offers a pineapple corer, a peanut grinder adjacent to the produce department for making peanut butter, as well as a hot bar in the deli area. “For us, these new services are important,” says Hartman. “Anytime you can put something in the store to separate yourself from the competition, whether it’s a product or a service, it gives people a different reason to come into the store.”

Some executives who previously worked with successful hybrid stores recently joined Healthy Home Market. The chain capitalized on their experience in establishing the hybrid market, says Hartman. “A lot of mainstream retailers are already kind of dabbling in natural and organics, but not going full into them,” he says. “We’re doing it the other way, marrying natural and organics with a traditional grocery store. What should be taken from this is the natural and organic marketplace is becoming more mainstream. There’s a higher demand for them.”