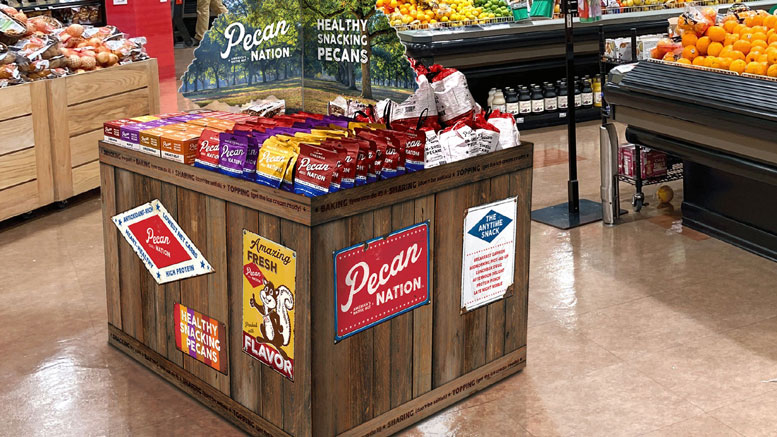 Americans are consuming more pecans. Whether topping holiday or everyday meal favorites, as healthy, on-the-go snacks and lunchbox treats, or as ingredients in foods, pecans are experiencing increasing sales. By developing effective displays and merchandising strategies that help increase sales, retailers can benefit from the booming interest in the tasty nut.

“Pecans have come up in the world over the last 10 years, that’s for sure,” says Mark Cote, regional produce merchandiser for Redner’s Warehouse Markets Inc., in Reading, PA. “There are many ways you can get that pecan sale. They’re great for snacking and are an anytime snack. They have a lot of flavor. You can eat them as a late night snack, put in the lunchbox, you can garnish them with anything for breakfast. They’re not just for baking anymore.”

“I feel like there’s this kind of renaissance with pecans,” agrees Duke Lane III, managing partner of Genuine Georgia Group LLC, based in Fort Valley, GA. “Just look at the growth in the last few years. A lot of that we can attribute to better merchandising and bigger displays. Pecans are kind of fashioning themselves to be a super healthy, on-the-go snacking item.”

During the past five years, pecan consumption increased by 36%, notes Jeff Smutny, director of marketing and regulatory affairs for the American Pecan Council, Fort Worth, TX.

During the pandemic, shipments of pecans rose by 8.5%, he adds.

“They (pecans) are a key part of overall nut sales, especially in the fall,” says Daniel Zedan, executive vice president of sales and marketing for Pecan Grove Marketing LLC, based in Batavia, IL. They’re important for retail sales because of their versatility, he adds, and consumers perceive them as a quality product.

“Pecans have a better flavor profile, more uses than walnuts and a longer shelf life,” Zedan says. “They are also very healthy. Pecans make all snacks better and are considerably healthier than other snack items.”

For the 52 weeks ending in May, U.S. retail pecans snack nuts were $64 million in dollar sales, up 15.3% in dollars compared to the $55 million from the previous 12 months, which also increased 3.1% from 2019, according to data from 210 Analytics LLC. Pecans experienced an even stronger performance in volume, gaining 21.2% in volume sales, which were 6.1 million, according to 210 Analytics.

“This made pecans one of the fastest growing nuts, ahead of macadamia nuts that increased 5.7% in sales,” says Anne-Marie Roerink, president, 210 Analytics. “In addition to snacking, pecan sales also benefit from the baking trend. Starting with the shelter-in-place weeks, Americans turned to baking their own breads, pies and cookies and the sales of baking mixes, flour, sugar and all things baking averaged 20% over a year ago in 2020. Baking supplies continue to benefit from above-normal demand.”

The sales gains are positive news to the industry. “The future for pecans is very good. There are adequate supplies. Consumption continues to increase,” says Zedan.

Pecans are leading the way in the snack nut category. From 2020 to 2021, Genuine Georgia’s pecan sales increased 32%. Lane cited industry figures that show overall, snack nuts experienced a 2.5% gain in terms of dollar sales from the previous year. For pecans, it was more than 15%.

Lane and others expect that growth to continue.

“The future is bright due to a vigorous U.S. supply of pecans,” says Samantha McLeod, executive director of the Georgia Pecan Growers Association, headquartered in Tifton, GA. “Sales continue to see an upward trend in pecan purchasing, with particular spikes around holidays.”

Pecans have not garnered the popularity of almonds or pistachios due to limited availability in the past, she says, “but buying trends point to growing consumption and recognition of pecans among millennial and Gen-X consumers.”

In most U.S. production regions, harvesting begins in late September and early October and runs through February. Peak production occurs in October and November.

Worldwide, production is also increasing, says Zedan. Mexico and the U.S. produce about 80% of the world’s supply of pecans, he says, but over the past decade, South Africa surpassed Australia as the world’s third largest producer. New plantings are also coming into production in Argentina, Brazil and Peru.

NOT JUST A HOLIDAY SALE

Formerly an item that saw most of its sales during Thanksgiving and Christmas, pecans are enjoying increasing sales throughout the year.

“Pecans are marketed outside of the indulgent holiday season, as a healthy snack via a regional omnichannel campaign, and through various public relations campaigns,” says Smutny. “The industry understands that it needs to continue the healthy message to grow market share. Pecans fit into the various lifestyle diets like keto, paleo and Mediterranean.”

To capitalize on the increasing interest, supermarkets must properly merchandise pecans. Zedan recommends retailers highlight their flavor, versatility and health benefits. “Retailers should stress pecans’ health benefits, versatility and flavor, as well as pairing them with other natural items like blueberries, cranberries and cinnamon.”

Pecans are flexible in that they can be displayed in different areas of the store. Supermarkets prominently display pecans in the produce and bakery aisles as well as with in-store bakery items.

Marketing pecans in shipper boxes, effectively designed by produce people, can aid sales, recommends Redner’s Cote. He says retailers like sturdy and stable shipping boxes that can be quickly assembled and not fall apart when moved around in the produce department. “Sometimes, pecans get lost on the shelves, but the shippers will promote them,” says Cote. “Pecan sellers do a good job designing the shippers. They will sell a lot of pecans at retail.”

Outside of the fall and winter holidays, most months offer some sort of holiday or special celebration. McLeod, with the Georgia Pecan Growers Association, recommends retailers emphasize pecans in January as part of healthy diets and life changes; in February during American Heart Month; in March to include in fresh spring salads; in April and May for Easter, Mother’s Day and Memorial Day, which provide opportunities for baking and grilling with pecans. August means back-to-school snacks, and the combination of pecans and pumpkins can highlight September promotions, followed by October’s Halloween treats.

The latter part of the year affords multiple cross-promotional opportunities. “In the fall, pumpkin-pecan promotions work well together,” explains McLeod. “Pecans work well with cranberries and blueberries, as well as apples and, of course, pumpkins.”

Pecans can be displayed many ways, says McLeod. “Pecans are a stand-alone snack, but are also a staple as part of baking, salads and ice cream, as examples. Pecan-crusted meats such as chicken, fish and pork are gaining significant popularity among foodies.”

Shippers are optimistic consumption will increase. “We have been working hard as an industry making people aware of not only how tasty pecans are to eat, but how good they are for you, their many health benefits. The health attributes are what seem to be growing consumption. When you start thinking about the new pecan consumer, it’s all day, every day.”