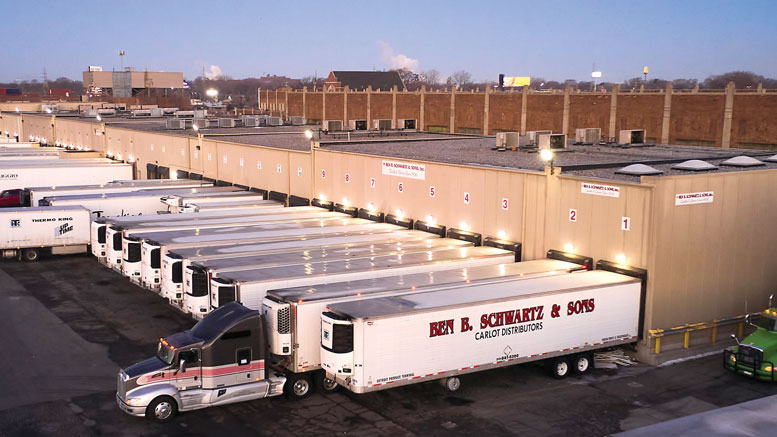 Detroit retailers and wholesalers pride themselves on supplying fresh produce.

Originally printed in the November 2021 issue of Produce Business.

From its range of grocery stores to its variety of restaurants, Detroit offers plenty of opportunities for wholesalers, distributors and retailers to market fresh produce.

But independent grocers in Detroit are important to the fabric of the city, too. Independents have a 6.4% market share with 182 stores and $715 million in annual sales.

“Detroit has a strong independent retail presence — guys that aren’t national but have one to five stores,” says Bill Loupée, chief operating officer at Ben B. Schwartz & Sons Inc., located In Detroit, MI. “It’s great because Detroit residents get something outside of big box stores.”

Ben B. Schwartz wholesales fresh fruits and vegetables to local Detroit grocery stores. The primary supplier for independent stores and foodservice companies has been building partnerships since it was established in 1907.

Larry’s Foodland operates one Detroit-area grocery store, and has seen its produce sales increase as people continue pandemic habits of eating healthy at home and dining out less.

“We’re getting whatever produce we need right now, knock on wood,” says Jeffrey Torolski, owner of Larry’s Foodland in Livonia, MI. “There is no supply shortage with produce and a lot is homegrown right now. Maybe we’ll see problems later with all those ships on the coasts.”

“I think what makes Detroit unique, is there are a lot of independent retailers who do a phenomenal job of working hard to buy great produce at a good value, so consumers have the opportunity to buy the best produce in the country,” says Dominic Russo, sales manager at Rocky Produce Inc. in Detroit. “That is something that is very special.”

Rocky Produce, a wholesale distributor, sells a full line of fruits and vegetables to retailers. The third-generation company sources from Michigan, North America and overseas. Brands include Dole, Grapery and Mayan Sweets.

Distributors, retailers and foodservice companies purchase fresh produce at the Detroit Terminal Market, located at 7201 W. Fort St. Much of the produce consumed in Detroit comes from there, and has since 1929. Consolidation means only eight wholesalers are left, yet volume remains high.

“What we see in our market is an increase in customers, both retail and wholesale, from neighboring markets,” says Dominic Riggio, president of Riggio Distribution Company in Detroit. He adds that customers are willing to make the trip to Detroit for their produce needs, because of his company’s focus on quality and value.

Riggio Distribution Co., a fresh produce wholesaler and distributor, services the Midwest from the terminal market. It also offers retailer services, such as customized packing, warehouse to warehouse delivery, and direct store delivery on refrigerated trucks.

Rocky Produce is open from midnight to mid-afternoon at the terminal. Its customers visit from one to three times a week, and the company aims to source top produce at a fair price. “That’s what we do. And because of God’s favor on our team, the favor we have with our growers and with customers, and the hard work we put in, it is a winning formula,” says Russo.

Ben B. Schwartz has seen a rise in independent retailers, which make up the core of daily buyers seeking quality fruits and vegetables at the terminal.

“They obviously want to get produce at the quality and price that fits their retail market. They’ve found the best way to do that is to come down here every day. The independent retailers get a sense of whether the market is rising or falling based on what particular items we are carrying,” says Loupée.

Leonardo’s Produce is a foodservice distributor that has operated for 35 years. Mom and pop independent restaurants with one or two locations comprise most of its business. “Detroit has one of the stronger terminal markets I’ve ever been in — and I’ve been to Chicago, LA, New York City,” says Bobby Grinstead, president of Leonardo’s Produce, who is new to Detroit, having previously worked in produce in Dallas, Phoenix and Denver.

“We buy most of our items from the terminal market, but we are also shifting and trying to go direct. While we are able to save customers some money by going direct, we also get a couple more days of shelf life. In the last two months, we have been trying to bring it in fresh from the farms itself.”

THE ROLE OF WHOLESALERS

Wholesalers are key to marketing produce successfully, both in the Detroit region and beyond. They also tend to employ staff with extensive industry experience, which benefits both suppliers and customers.

“Wholesalers play a very important role in the produce ecosystem. As wholesalers, we are very nimble and can react quickly to changes in market conditions,” says Riggio.

Rocky Produce’s Russo believes wholesalers remain vibrant because produce is perishable, and they work diligently to carry the best and the freshest. “In my mind, there is always a place for distributors in the supply chain. Retailers and wholesalers alike depend on reliability,” he says.

Ben B. Schwartz is agile enough to fill gaps for chain stores when a normal provider runs out of product. “That is really where we’ve been able to expand outside of Detroit. We do daily runs to Cleveland, Indianapolis, Toronto. We can deliver within 24 hours or less to anywhere within 1,000 miles of Detroit. This is a huge benefit to our large, national retail customers,” Loupée says.

Other Detroit wholesalers service various U.S. regions too. “Geographically, Detroit is positioned directly between Chicago-Toronto and Cleveland-Grand Rapids, which creates an opportunity to trade in with those markets as well as the entire Midwest,” Riggio says.

Gordon Food Services, a wholesale grocer, foodservice supplier and retailer headquartered in Grand Rapids, MI, has been in the Detroit area for nearly 100 years, serves Detroit colleges, universities and pizza shops, and has 20 area grocery stores. “The abundance of our unique customers allows us to be creative and innovative in our product assortment,” says Mark Schurman, company spokesperson.

A variety of factors make the Detroit produce market unique. Detroit has a number of ethnic groups as part of its population, including the largest Chaldean population in the U.S., says Loupée. Chaldeans came from the area now known as Iraq for auto factory work in the 1920s, are Roman Catholic, and speak a dialect of Aramaic. Chaldean News says of the 500,000 Chaldeans in the U.S., about 160,000 live in Detroit.

“Southeast Michigan is very unique and diverse across all spectrums. There is a heavy European and Middle Eastern influence in cuisine and eating habits in both retail and foodservice,” Riggio says.

With its blend of cultures and penchant for independent restaurants, Detroit has plenty of dining establishments happy to utilize fresh produce for unique tastes and flavors.

The Detroit Convention & Tourism Bureau reports Detroit has six restaurants with chefs who were recently nationally recognized by the James Beard Foundation. A two-Michelin-starred chef runs Apparatus Room and Chef’s Table at the Detroit Foundation Hotel.

“One of the things we found is a huge independent culinary scene, maybe one location per restaurant,” says Grinstead of Leonardo’s Produce. “This gives chefs a chance to be able to push — to try new menu items, try different ways of cooking items. They are not restrained by having to use the same products in the same way for cooking.”

Leonardo’s Produce supplies everything from mangos to pre-ripe tomatoes to independent restaurants with distinct kitchen needs. It added same day delivery to restaurants, and joined a network of independent companies called Fresh Edge to better service customers. It delivers as far west as Traverse City, MI, north to Petoskey, MI, and over to Toledo in northern Ohio.

When restaurant chains experienced labor shortages during the COVID pandemic, Leonardo’s responded to a demand for pre-cut items. “Brussels sprouts have been a big thing, and chains can reduce their labor if they are pre-cut. So we are delivering halved Brussels sprouts,” Grinstead says.

Michigan produce impacts the Detroit region during the summer growing season, and locally grown produce is desired by restaurants, retailers and customers.

“With the vast number of crops grown here in Michigan, we are able to offer the region’s many Michigan-grown items when in season,” says Gordon Food Services’ Schurman.

The desire for local produce influences supply and demand, and affects planning, logistics and sales for wholesalers and distributors. “Certain vegetables slow down in summertime for us, because farmers go directly to customers in a lot of ways. And, in other ways, we are supporting Michigan grown produce and supporting the farmers. We flow with the demand cycles and production cycles. As long as we’re in the business, we’re going to ride it out and make the best of it,” says Russo of Rocky Produce.

Ben B. Schwartz’s Loupée notes freight rates have increased by 35% over the past two years, due to driver shortages and the effects of the pandemic. Transportation costs are lower if produce is sourced locally.

“Our guys are constantly transitioning to local product based on growing season and sourcing of product from elsewhere. They know when to transition based on product quality and what they hear from their shippers. Consumers want local when available, and we want that too,” says Loupée.

Leonardo’s Produce has similar concerns about higher freight costs, and finds there can be challenges bringing less than container (LCL) loads to Detroit.

“I think the challenge for Detroit is, it is not like Chicago, where produce is moving from Idaho to New York and you can piggy back on freight rates. If produce makes its way to Detroit, it is not going anywhere else. In order to go direct, we need to do some pretty intense planning,” says Grinstead of Leonardo’s Produce.

So wholesalers and distributors support homegrown product from Michigan, stay flexible, and shift their strategies when needed.

“Everyone is trying to support local, and Michigan has absolutely gorgeous produce when it’s in season: cherries, apples, peaches, tomatoes, zucchini. We try to make a lot of our bigger moving products available for as many customers as want and need it,” Grinstead says. “It is a short season, so you bulk up and play the local game as long as you can.” 