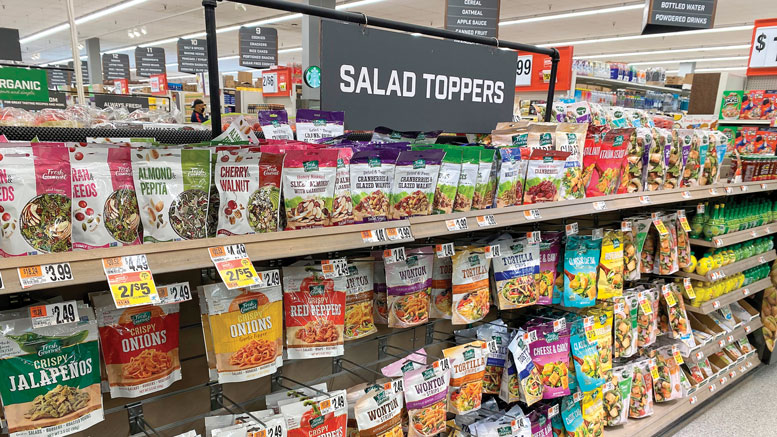 Although salad toppers, far beyond the traditional crouton, aren’t new to the industry, new varieties of nut mixtures and other tie-ins are making an impact in produce sales across the country.

Offering a variety of non-perishable salad enhancers contributes to the bottom line.

Almonds can continue to be a powerhouse in the produce department, but it is up to retailers to beat the drum loudly about their health benefits and versatility and to merchandise adroitly. As the needs of today’s consumers evolve, almonds possess undeniable appeal, aligning with growing demand for plant-based foods, holistic and personalized nutrition, and exciting sensory experiences.

Salads are often seen as a blank canvas, where a person can add just about anything to them in order to create a custom meal. Although salad toppers, far beyond the traditional crouton, aren’t new to the industry, new varieties of nut mixtures and other tie-ins are making an impact in produce sales across the country.

Some of the wide range of non-produce items that consumers add to their salads include: croutons, mixed or flavored nuts, dried fruit mixtures, seeds and even dried noodles. According to suppliers reached for this article, though many salad-topper enhancers are found outside of the produce department, those sold within Produce gain the added benefit of additional fresh produce sales adding to the market basket.

Having enough room to properly advertise and sell a product is a given for the produce department, but recently many non-produce companies have been insisting on additional space for their products.

Samantha McCaul, marketing manager for Concord Foods LLC, headquartered in Brockton, MA, says there isn’t necessarily a formula for the amount of space required for salad-topper enhancers or tie-ins in general.

“The non-perishable items that are often included in displays must have a strong tie-in with fresh produce,” says McCaul.

She notes that the best placement for companion items should be found on shelves that are adjacent to the relevant produce item. “You really don’t need to set aside a lot of space for these products,” says McCaul.

Mike DeCramer, retail sales director for Tropical Foods, headquartered in Charlotte, NC, agrees with McCaul on product placement, as it relates to companion items. “It creates product application association in the customer’s mind while also increasing the likelihood that they will purchase both items,” says DeCramer.

“The goal is to make it easier for the consumers to load up their cart and inspire them to purchase then and there, rather than having them walk across the department or across the store to find complementary items,” says Sheng.

According to McCaul, retailers can get creative on how to maximize the available space to showcase various salad topper tie-ins. Concord Foods and other companies typically provide racks, display cases and floor displays for tie-ins, she says.

She also notes that 65% of customers who buy the company’s banana bread mix also purchase fresh bananas, according to the company’s research.

“It also adds interest and variety to the produce department.”

GIVE CREDIT WHERE CREDIT’S DUE

Overall, there isn’t an exact formula for the amount of fresh produce that will be purchased with each tie-in item, but retailers who offer products that require additional fresh produce see increased purchase amounts.

Offering a variety of non-perishable salad enhancers contributes to the bottom line, says Tropical Foods’ DeCramer, who adds that retailers can anticipate earnings from items classified as salad topper tie-ins. “Generally [a retailer can expect to see] 40-45% in profits, which makes these items really nice profit-generators for the department,” he says.

“Generally [a retailer can expect to see] 40-45% in profits, which makes these items really nice profit-generators for the department.”

However, he adds that not all salad topper items are purchased through traditional produce channels. In fact, it’s not uncommon for the items to be brought into the produce department from grocery buyers. “I find that on many occasions the product may be purchased through another department and be merchandised in produce,” says DeCramer. He adds that this “really depends on a retailer’s merchandising strategy.”

“The credit for the sale will go to the department that purchased it, regardless of which department it is merchandised in,” says DeCramer.