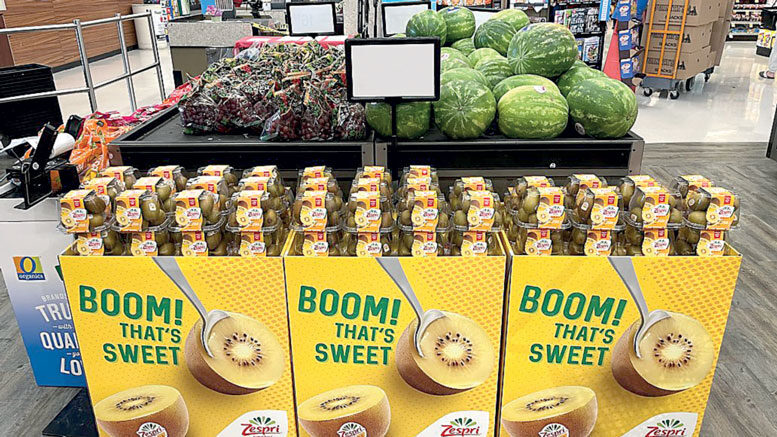 Zespri research found retailers saw sales average around a 40% incremental lift with temporary price reductions (TPR), but that increased to an average of an 86% lift when a display was paired with the same TPR.
PHOTO COURTESY ZESPRI NORTH AMERICA

‘It’s the fastest-growing item in the fruit bowl.’

In the stores of Publix Super Markets Inc., kiwi is merchandised with a combination of both bulk and packaged product, according to Maria Brous, director of communications for the retail chain based in Lakeland, FL.

“The packaged product typically contains a different variety like (Zespri’s) ‘SunGold’ and also organic kiwi. The package serves as a good way to separate traditional bulk kiwi and educate customers on the specific variety through labeling,” Brous says.

Sarah Deaton, shopper marketing manager of Zespri North America, based in Newport Beach, CA, notes the kiwifruit category “has definitely changed” over the years, particularly the merchandising of bulk versus packaged product.

Now, category sales are 78% packaged and 22% loose. “Packaged product is driving the growth overall,” Deaton says. “We are really excited about kiwi in general. It’s the fastest-growing item in the fruit bowl.”

Kragie explains that clamshells are a common retail package for many commodities. Because there are a variety of means to seal clamshells, that pack is viewed as offering consumers the greatest food safety assurance.

While Kragie certainly complies with all customer wishes, he reminds them that no package is absolutely safe. And he tells customers that packing in retail display bags is half the cost of clamshells. With bags, no sleeves, or clips or stickers are necessary, and bags feature their own closure and offer abundant printing space for art, product information and consumer education.

Retailers’ costs and complications in changing SKUs slows whatever logical reasons may drive a change in packaging, he notes.

Although Western Fresh provides any package requested by customers, Kragie notes global supply shortages and logistical slowdowns delay filling such orders, which can now take months when product material delivery used to be a matter of weeks.

Western Fresh is a marketer of kiwifruit and many other fresh produce items produced by independent grower-packers who all use Western Fresh packaging to fit the firm’s marketing programs.

“Kiwi has gained popularity over the years and is considered a mainstream item,” Brous observes, adding the peak season for selling kiwifruit is in the summer.

At Publix, kiwi is often displayed with other bulk, soft fruit varieties off refrigeration, she says. And in cross-merchandising, “Kiwi ties in well with grapes, berries and other soft fruits.”

Dino Medica, the produce coordinator of Seattle-based Metropolitan Markets, agrees kiwi sales have gone up over the last two or three years. But Metropolitan Markets doesn’t automatically merchandise kiwifruit. Medica chooses his emphasis on merchandising, depending on the kiwi itself — and the time of year. “In late summer, there is more action. We look for bigger fruit.”

The chain creates its own marketing materials. And for promotions, the Seattle retailer buys jumbo single layer trays. “We also sell one pound.”

Jordan Dunlap, sales and operations manager of Pinnacle Fresh USA, notes “the trend of a healthier lifestyle in the U.S. is growing upward. This is allowing fruits such as kiwi to become a sought-after flavor that most recognize.”

Among new kiwi varieties, Medica says gold is attracting more people than ever. “It’s a great piece of fruit.”

Another recent addition beyond green and gold kiwifruit is the “Oriental Red,” imported from Italy to Philadelphia and Savannah by Pinnacle Fresh USA LLC. Oriental Red, a proprietary variety produced and exported by Jingold in Italy, has an attractive red color within its core.

Pinnacle describes its Oriental Red kiwi as “a Jingold world exclusive, an absolute novelty destined to change the kiwi scenario. Originating from the Chinese Academy of Sciences, the Red Dong-Hong Kiwi is an entirely natural product, cultivated by Jingold producers. It has unique organoleptic properties, excellent duration and is extremely sweet, making it especially popular among young consumers.”

“Organoleptic” refers to qualities such as taste, color, odor, and feel.

Key to moving SunGold and the traditional green Hayward in the U.S. market is Zespri’s Deaton. Zespri, headquartered in Newport Beach, CA, is owned by New Zealand Kiwi Holdings Inc. Zespri bred and introduced SunGold from New Zealand, and it is proprietary to Zespri.

“It is sweeter than green varieties and has a tropical taste,” Deaton says. “Because of SunGold, a lot of people come back to kiwifruit because of the taste.”

“Our Zespri SunGold kiwi has 57% of the category growth,” she adds, citing national research data.
But, she stresses, “SunGold won’t replace green. It’s incremental sales to the category.”

Despite demand, specialty plantings are minimal for a couple of reasons, Kragie explains. First, there is an aversion to kill the strong prices by increasing volume to exceed demand. And second, “royalties to propagators are very costly, so prices of the plants to growers are high and in short supply, which only heightens the need for higher FOBs.”

To boost Zespri sales, “bright, unique” merchandising materials are made available to retailers. Deaton describes these as upright packages to stand on shelves. Packaging enables Zespri to share educational messaging with consumers. Among these tips: “Cut and scoop. You don’t have to peel the kiwi!”

And there’s hard data on display. In 2022, overall display dollar sales increased 147% compared to 2021, Deaton says, adding that in the U.S., 25% of all SunGold volume was sold while on some type of display.

Zespri research shows retailers saw sales average around a 40% incremental lift with only temporary price reductions (TPR), but that increased to an average of an 86% lift when a display was paired with the same TPR.

Point of sale materials include 7-by-11 inch and 4-by-6 inch cards with clips that attach to Zespri displays or directly to the retail shelf.

Zespri’s New Zealand kiwi season begins in mid-May. “We exit the market at the end of October or beginning of November. We extend our season with Italian kiwifruit into the winter. We are not in the spring months,” Deaton explains.

“This year has been a great season” for Zespri, she adds. “We have had the supply and labor issues that everyone is dealing with, but with a great operations team, we are able to bring kiwi to our customers, drive demand and have great results at the register. It’s very exciting.”

Western Fresh kiwi is on the market 12 months a year, with the vast majority of the fruit coming from California and Chile. In some market situations, or to receive a particular size of kiwi, Western Fresh will import kiwi from Greece or Italy.

Released Aug. 15, the 2022 California kiwifruit production estimate predicts Hayward kiwi will have 8.2 million tray equivalents. This is down from a 9.2 million estimate for 2021. (The final 2021 crop count was 9.4 million trays.)

Kragie reports Chilean kiwifruit imports were running later than expected, so the impact of a short California crop might be a good thing, he says, if the Chilean imports continued to extend into the traditional California season.

Kragie’s firm expanded its California grower network this season, so Western Fresh will have greater kiwi volume regardless of the state’s overall supply.

On the marketing side, Western Fresh is undergoing “massive rebranding” in 2022, and by the beginning of 2023, will release upgrades to its website and logo.

But while trading from Australia, six years ago Pinnacle saw the opportunity for competing with relatively nearby New Zealand kiwi to serve niche markets within Australia with Italian green, gold and red kiwi. This December will begin Pinnacle’s third season in the U.S. market with Italian kiwis grown by Pinnacle’s partner Jingold. Dunlap says the Italian kiwifruit are available in the States from December until April.

Given its relatively small volume and presence in East Coast ports, Pinnacle primarily sells its Oriental Red and green Italian kiwis on the Atlantic Seaboard. Most is sold to high-end East Coast retailers such as Wegmans, Fresh Market and Whole Foods. Staying in the East helps avoid competing with domestic California kiwi, Dunlap added.

Pinnacle’s target audience ranges from families purchasing 1- or 2-pound clamshells to the average single daily shopper purchasing by the piece with single layer trays. Jingold products are packaged in the U.S. in clamshells or single-layer trays.

Dunlap says the target consumer age swings from young children for a healthier alternative snack to elderly with high taste content for a tropical flavor profile.

Mix It Up to Make Mango Magic