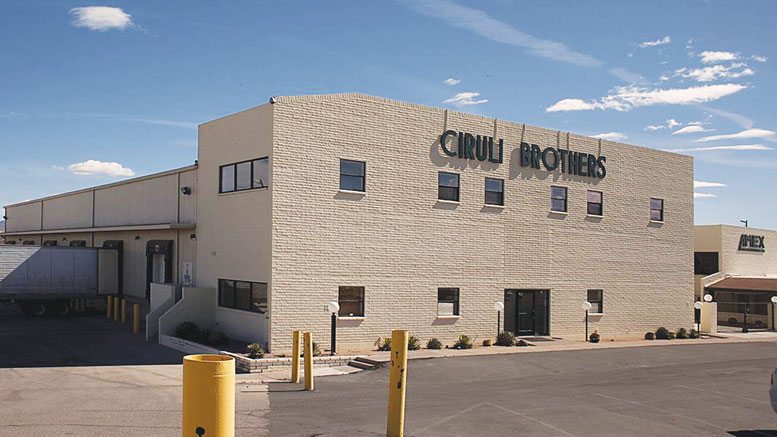 Building on a strong foundation, the Nogales industry continues advancing with investment in infastructure and logistics. 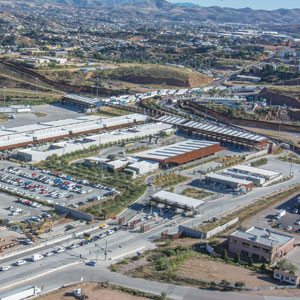 Despite challenges from the economy, competing ports and even anti-trade rhetoric, the Nogales, AZ, import community remains a crucial cog in the wheel serving U.S. produce buyers and consumers. With more than a century of experience, Nogales is still the top port of entry for Mexican produce. USDA-Agricultural Marketing Service (AMS), statistics reported by the Fresh Produce Association of the Americas (FPAA) in Nogales show a total volume of 6.3 billion pounds of fresh produce imported during 2016. “We continue to see this portal from West Mexico into the United States as vibrant as ever,” says Alejandro Canelos, director at Nogales, AZ-based Apache Produce Imports.

In fact, a 48-year history of import statistics compiled by the FPAA (also based on USDA-AMS data) demonstrates Nogales’ steady importance in Mexican produce imports during the last half-century, but with a marked jump beginning in the 1990s. Imports increased from just above 500,000 metric tons in the early 1990s to 2.9 million metric tons in 2015 — a growth of more than 400 percent in a little more than 20 years.

Christopher Ciruli, chief operating officer at Tubac, AZ-based Ciruli Brothers, agrees the port has played a key role in the industry for the past century. “Since the remodel a few years back, the port is much more efficient, and crossings are expedited much faster,” he says. “There is still plenty of capacity and room for growth.”

Since the remodel a few years back, the port is much more efficient, and crossings are expedited much faster.

This volume has been supported and encouraged by the pre-emptive attitude and labors of the Nogales produce community. Jaime Chamberlain, president of J-C Distributing and Chamberlain Distributing, says Nogales companies actively work to maintain and increase their role in the produce marketplace. “We take our job to ‘feed North America’ very seriously and we’re investing in it,” he says.

One of the biggest indicators of Nogales’ continuing commitment and strength is the increase in new warehouse space being built, according to Canelos. “Businesses are expanding, moving up and improving facilities,” he says.

As an example, Nogales, AZ-based Ta-De Distributing now boasts 55,000 square feet of warehouse space and continues to invest in technological innovation, such as solar power. “Our facility allows us to handle ins-and-outs for shippers who don’t have their own facilities,” says Robert Bennen Jr., president. “New warehouses being built with state-of-the-art technology mean Nogales is in the forefront of industry.”

Chamberlain notes another significant movement is a tremendous amount of remodeling of older facilities. “There is a remarkable amount of investment from both Nogales distributors, as well as growers in remodeling,” he says. 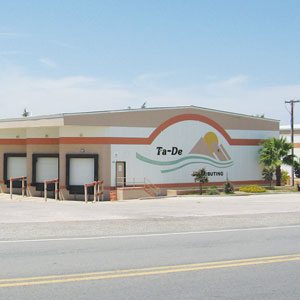 Private companies are not the only ones in Nogales looking to invest in the growth of the industry.

“The industry, government and FPAA have been in the process of working to improve infrastructure so it keeps up with the growth in the industry,” says Canelos.

In 2014, the Nogales-Mariposa Port of Entry underwent substantial reconstruction, increasing its capability to process commercial trucking with a potential reach of 4,000 trucks per day. Now, other infrastructure projects look to complement the new port’s efficiency. Lance Jungmeyer, president of the FPAA, reports State Route 189 reconstruction will be moving forward with construction to start in 2018-19. “SR 189, also known as Mariposa Road, is the main connector between the Mariposa Port of Entry and the main interstate traveling north from Nogales,” he says. “Following the reconfiguration of the Mariposa Port, the next logical step is an overhaul of the road leading into the United States from the port to prevent future traffic delays as volume through the port continues to grow.”

Sabrina Hallman, president and chief executive of Nogales, AZ-based Sierra Seed Company, relates Nogales continues to build the infrastructure and support necessary for even greater streamlining. “The Mariposa Port has developed a joint inspection process with both U.S. and Mexican Customs working side-by-side, allowing trucks and products to cross more efficiently,” she says. “And, the state of Arizona and our DOT (Department of Transportation) continue working toward improvements on the roadways and highways. These options continue to decrease the amount of time from field to table, allowing fresher product in our marketplaces.”

FPAA also reports the state is looking at improvements to the Ruby Road/Rio Rico Drive exits. “These service the industrial park in Rio Rico, where many firms are located,” says Jungmeyer. “This infrastructure project will provide better access to the main commercial area in Rio Rico.”

The Ruby Road improvements will include a reconfiguration of the bridge at Ruby Road and East and West Frontage Road (at Rio Rico Industrial Park), according to J-C Distributing’s Chamberlain. “All these infrastructure projects will alleviate a lot of the congestion we now experience,” he says. “Issues in terms of safety and traffic flow will be addressed, resulting in expediting trucks, getting them from port to warehouse as soon as possible. The name of the game in Nogales right now is infrastructure, infrastructure, infrastructure.”

Another game-changing project involves cold rooms at the port.

“Through the Greater Nogales Santa Cruz County Port Authority, FPAA and the Nogales Custom House Broker Association are in talks with U.S. Customs and Border Protection (CBP) and the federal government to install a cold storage inspection area at the port for sensitive items such as grapes, berries, avocados, sweet corn and more,” says Jungmeyer. “This project is still in the due diligence phase. Once the project is complete, the cold storage inspection facility will make the Mariposa Port more attractive for some of the very sensitive produce items crossing the border. This will add to the overall volume and diversify logistics and the supply chain for many companies already exporting from Mexico.”

Once the project is complete, the cold storage inspection facility will make the Mariposa Port more attractive for some of the very sensitive produce items crossing the border.

Chamberlain believes the new cold room at the port will greatly impact business. “The cold rooms will increase confidence for those growers needing a refrigerated space for products to get inspected at the port of entry,” he says. “Nogales is working toward year-round use of our facilities.”

As Nogales continues to cross more perishable items, Ciruli expects the transportation trend to follow suit with increased less than load (LTL) availability. “In years past, it has been difficult to find trucks in the late summer and early fall due to a shorter produce season, but with longer seasons with vegetables from South and Central Mexico, grapes, mangos and oranges, we are starting to see more LTL in town in the months of August and September,” he says.

The strengthening infrastructure in Nogales and expanding seasonality and diversity from Mexico results in a “shopping mall-style” experience for buyers, as described by Canelos. “One of the biggest values of Nogales is the ability for a buyer to fill a whole order in one place,” he says. “Like going to a mall, everybody is geographically close to one another, and there are a lot of products to choose from. This is the largest representation of the Mexican industry all in one place. As a buyer, you can shop the best stores with the best stuff to choose from.”

Ta-De Distributing’s Bennen says this convenience and availability has affected buying patterns. “We’ve seen a big shift from our industry partners going from loading straight loads of product a few times a week to instead loading mixed loads of exactly what they need every day,” he says. “Confidence in supply has allowed them to load and receive fresh shipments daily. This has helped decrease shrinkage on their end and maximizes their commitment to supplying customers with fresh, flavorful produce. The fact that Nogales itself is like a huge terminal market helps make this possible.”

Nogales businesses play a proactive role in increasing the availability and diversity of their supply. “Nogales companies continue to invest in and explore new growing areas and microclimates,” says Allison Moore, FPAA director of legislative and regulatory affairs. “They are also working with growers who innovate and extend the growing season and varietal offerings through the use of protected agriculture and growing technology.”

The role of the Nogales company, according to Bennen, has evolved into more procurement management. “Customers can rely on us to source and put together mixed loads for them in a fraction of the time it takes them,” he says. “Having a large warehouse allows us to also help local distributors who don’t have enough space with ins-and-outs.”

Moore notes buyers have purchased from Nogales for decades because of the value added in sourcing from a U.S. importer handling the logistics of importing from growers in Mexico. “Also, many growers are financed by the U.S. importers they work with, which is not a role many buyers are interested in taking on themselves,” she says. “Though we see some direct buying on a small scale from a few buyers, the vast majority of purchasing continues to be done through the U.S. companies.”

Nogales’ infrastructure and expertise also provide benefits for U.S. produce shipped into Mexico. “Because there is so much infrastructure in place for northbound produce movements, Nogales is an excellent point of exit for U.S. exports bound for most of Mexico,” says John Pandol, director of special projects at Pandol Brothers in Delano, CA.

FPAA reports 270,392 metric tons of U.S. produce exports were handled via Nogales in route to Mexico in 2016. “Nogales is an export point for a variety of U.S. commodities, especially fresh apples and pears,” says Moore.

“They are inspected in Nogales by Mexican officials and sent to markets across Mexico,” adds Moore.

Importers in Nogales claim a long history of being involved in the food safety of their supply chain.

“Before FSMA, importers worked with growers to implement processes and procedures strengthening food safety systems from planting to harvest to shipping to Nogales warehouses,” says Moore. “From working with third-party audit companies and hiring in-house food safety experts, to partnering with the Mexican Department of Agriculture on food safety initiatives, Mexico has been an innovator in food safety for many years.”

With the passage of FSMA, the role of the U.S. importer has become more formalized.

“FDA requires importers to document their efforts to ensure the food safety practices of their suppliers,” says Moore. “So for most companies, this represents a change in paperwork and record-keeping requirements for processes and systems they have been doing for many, many years.”

Moore says FSMA will continue to cement the key role of Nogales companies since U.S. importers must adhere to the law’s Foreign Supplier Verification Program requirements. “Nogales companies are uniquely situated to implement these requirements given their expertise in the industry and their close working relationships with growers across Mexico,” she says. “U.S. importers play an important role in the supply chain. They are a consolidation point for custom orders, a quality control point for orders being filled for customers, a logistics partner for customers that have very specific needs in their ordering and delivery requirements, and more.”

Apache Produce Imports’ Canelos asserts the implementation of FSMA and resulting technology push will benefit other areas. “Implementing the technology needed for FSMA affects how companies behave and operate,” he says. “As more money is spent on technology, our industry will increasingly be technology focused. Food safety is driving technology, and that technology in turn will affect how we do business. For example, FSMA requirements drive companies to go paperless and to invest in quality control (QC) and inventory information and feedback. Now QC platforms are available to do everything on tablets. This information can now be sorted, analyzed, and sent to sales staff and growers in real time.”