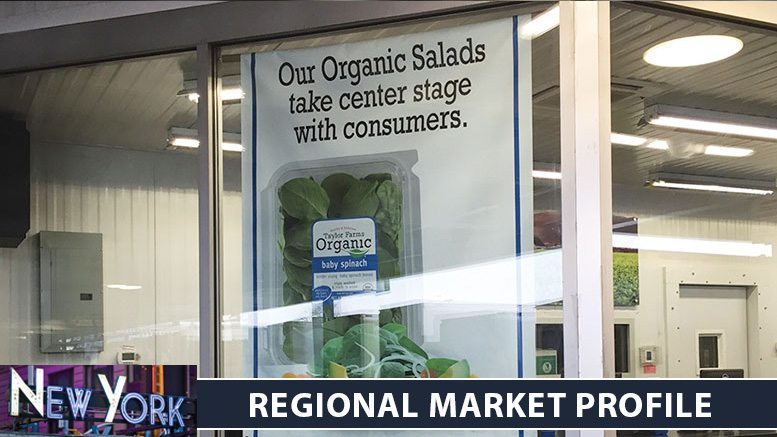 Whether they are fielding and filling orders on iPads or notepads, the Hunts Point Terminal Produce Co-Operative Association’s vendors say there are more frequent inquiries about produce that’s locally grown, seasonal and organic.

Paul Manfre, general manager at Top Katz Brokerage, a shipper/grower representative, likes to joke that organics are “the overnight sensation that have taken 20 years to develop.” In fact, he wrote an article for LinkedIn on that very theme — in 2015. “There’s a new generation, getting more knowledgeable. They’re asking for it for health reasons. Now there is a demand for it.”

Organics are still a niche category for some of the produce houses, but Stefanie Katzman, executive manager of S. Katzman Produce, calls them a “growing commodity.” Organics now represent slightly more than 1 percent of business at Katzman, but that’s a doubling over the prior year and we expect to see that trend continue.

“Now, we’re seeing interest on the farming side of things. Growers are asking us which organic items we might be interested in,” says Katzman.

“When organics can compete with conventionally grown produce price-wise, that’s going to be the big turning point. Why would you not want it if it’s close to the same price as conventional?” asks Manfre.

Ira Nathel, co-owner with brother Sheldon at Nathel & Nathel, says he’s seeing the price gap closing. The company has expanded its organic line in the past six months, now offering close to 90 items.

“You can’t have six or seven items and expect people to buy organics from you. You really need everything. We’ve partnered with some good organic shippers,” he says. “What we’ve been doing is taking it in in small ways. If we can sell 50 organic Romaine a week, then we take it in three times a week – 20, 15 and 15. That way the product is the freshest and we don’t take the hit if we don’t deliver out.”

FresCo’s President Charlie DiMaggio says he’s watched the category grow over the past 10 years. “I always thought we would have progressed to a much broader spectrum by now,” he says. He agrees the consumer choice is typically price-driven, and sees the cost differential shrinking.

Among Trucco’s most popular organic offerings are the Italian Clementines, available in December and January; and organic green kiwis sold under the KiwiStar brand. Trucco’s product line even goes a step beyond organic, with its biodynamic kiwi. These kiwis are grown on organic farms “that integrate plants, animals, water, air and soil into a regulating ecosystem,” according to the company’s website.

DiMaggio says demand is also increasing for local produce. “They think it has the optimal freshness if it’s grown locally. A lot of the time they see the product from far away, scratch their heads, thinking, ‘ What did they do to this to make it last so long?’”

“People are more aware of seasonal products and I think that’s actually a good thing,” says J. Margiotta’s president, Jimmy Margiotta. “For a while, consumers would pick up an apple in the summer and say it’s not so great; it’s not fresh. Now, there’s more knowledge about locally grown produce, and the seasons. That’s a good thing for us.”

PWPM: Serving a City of Neighborhoods