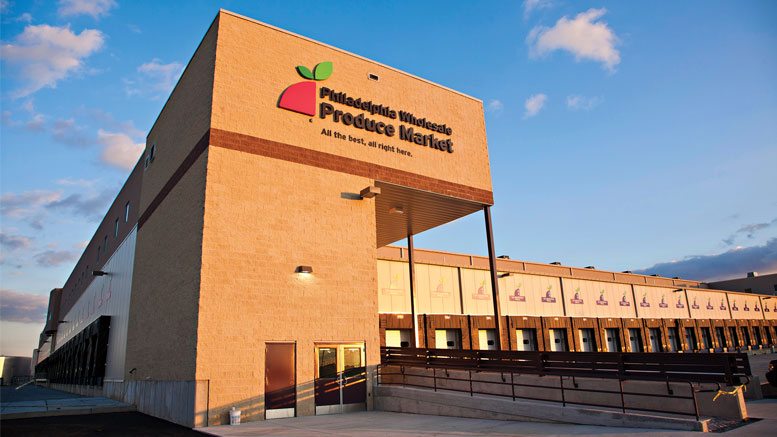 Strategic moves envisioned by businesses pave the way for lucrative sales and a vital facility.

In the past half-century, the city of Philadelphia rose from the ashes of a dingy, has-been metropolis to a bustling, hipster town. Philly’s resurrection story features a surge of trendy restaurants and retail shops now serving as witness to the area’s positive food culture. 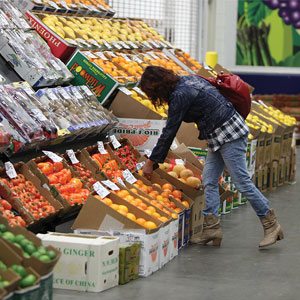 “The Philly food climate is very healthy,” says Filindo Colace, vice president operations for Ryeco. “The city boasts an ample cross-section of big retailers along with smaller independent and specialty stores. It’s a very diverse community as far as offerings.”

The multiplicity of Philadelphia’s residents allowed for the development of a wide array of businesses in the food sector. According to the Chain Store Guide’s 2015 Market Share Report, the greater Philadelphia area of about 4,700 square miles (which includes counties such as Bucks, Chester, Delaware and Montgomery) is populated by more than 6 million people: 67 percent Caucasian; 21 percent African American; 5 percent Asian; and 9 percent Hispanic. The average household income is $86,000 annually, and 4.5 percent of that income is devoted to food and beverages at home.

“There is a diversity of ethnicities, income levels, professional levels, and we see that mixture reflected in the retail and foodservice climates,” says Fadi Abi-Khattar, president of Klinghoffer Brothers, Inc.

“The city is thriving with many previously depressed areas now being occupied and renovated by younger generations,” reports Mike Maxwell, president of Procacci Brothers Sales Corporation. “Philly presents a wide variety of food options — all of which are bent on serving its diverse demographic.”

The city’s assorted food climate is evidenced by the wide array of customers presented at area wholesalers. “We serve a wide variety of customers from 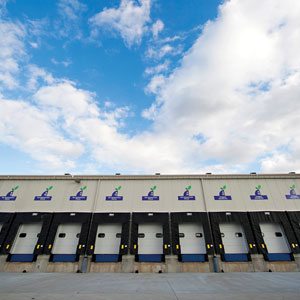 Martin Roth, vice president for Coosemans Philadelphia, observes the Philly foodservice climate also reflects its diverse demographic. “You have high-end, white tablecloth restaurants in Center City all the way to neighborhood joints serving blue-collar areas, a huge selection of ethnic restaurants, and everything in between,” he explains. 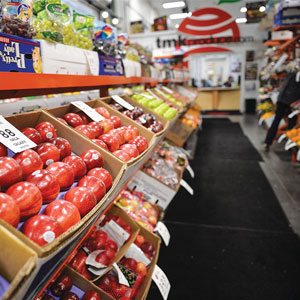 As Philadelphia transformed itself over the decades, so did its wholesale produce market — echoing the evolution of the city from historic Dock Street, to industrialized Galloway Street, to the state-of-the-art PWPM. Celebrating its five-year anniversary this past June, the new market’s implementation was no quick venture.

“We worked for decades before we actually broke ground,” says Joe Procacci, Procacci chairman and chief executive. “Now we have the finest produce market in the world. Our facility is unmatched, and we foresee great growth.”

Market merchants admit some rocky years, but say business is now climbing. “The PWPM is on an upward trajectory,” reports John DiFeliciantonio, owner of North American Produce Company (NAPCO). “We had our growing pains when we moved in. It was a new situation and a new style of business. Now, we settled in and are performing as we envisioned.”

The PWPM garners about $1.6 billion in revenue with gate sales up about 5 percent in 2015. “It seems just yesterday we moved in though we’re celebrating our fifth year now,” says DiCrecchio. “We’re proud to pave the way in terms of cold chain management, product safety, staging, loading, security, and recycling.”

“Now we have the finest produce market in the world. Our facility is unmatched, and we foresee great growth.”

Successful market merchants evolved over the past five years by adding space. Pinto Brothers Inc. recently added a fourth unit on the market to accommodate the company’s increased business. 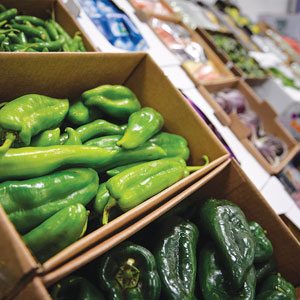 T.M. Kovacevich (TMK) just added its ninth unit. “With this additional space, we now have capacity to put more than 125 trailer loads in-house,” says Tom Kovacevich, general manager. “Once in a while it dawns on me that our on-market capacity at the old market was less than 25 loads.”

M. Levin & Company, Inc. is adding more ripening capacity — enabling the company to grow into the future. “With a fourth generation in place [who happen to be all women], we look forward to continued growth,” says Mark Levin, chief executive. “The next generation is engaging new business and keeping us current on new products and food safety issues.”

Merchants report increased customer satisfaction during the past five years due to the market’s cold chain benefits. “Customers want longer-lasting produce, and our technology means our packages last longer on the shelf,” says Abi-Khattar. “Retailers are reporting they’re getting better shelf life.”

Sangillo Farm Fresh Produce in Drexel Hill, PA, reports noticing significant cold chain benefits since the merchants moved to the new facility. “Product arrives in much better condition and has a longer shelf life since the move,” says Tom Sangillo, president and owner. “It looks fresher and lasts longer.”

Stephen Secamiglio, owner at Colonial Produce, remarks his customers feel more confident in buying at the PWPM facility with respect to shelf life “When product arrives here, it’s unloaded in 50 degrees and goes right in the cooler, regardless of the weather outside,” he adds.

Extreme temperatures drive customers to PWPM. “Customers know PWPM provides better shelf stability and this is never more relevant than when it’s 90 degrees or 20 degrees outside,” says Rick Feighery, vice president of sales for Procacci. “When there are temperature extremes, we see customers showing up from outside our normal geographic reach.”

Cold-chain confidence also results in greater consistency in buying volume. “At our old market, customers would buy less at certain times of year fearing the product would be affected by the heat,” reports John Durante, president of Nardella, Inc. “Now they buy the same regardless of weather.” 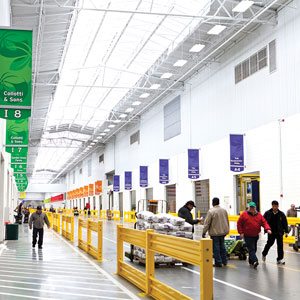 PWPM’s highly accessible and spacious facility results in greater efficiency for customers. “Our location allows customers to easily get here, load and get out,” explains Todd Penza, salesman with Pinto.

The ease of loading and transport makes good buys even better. “One thing is buying the produce,” describes Durante. “Getting the product to the store is another. Time is money. The good deal the buyer got is offset if the driver has to wait several hours to get loaded and get out.”

John Vena, president of John Vena Inc., reports seeing an upturn in buyers from the New York area as well as buyers from as far south as Washington, D.C. “It may be because our facility is easier to get trucks in and out of than other markets as well as the cold chain benefits,” he speculates.

Ample space inside the market, all under refrigeration, allows customers to effectively stage purchases before loading, and Coosemans’ Roth notes special benefit for those wanting to ship directly to multiple locations. “For example, a Chinese buyer purchased five skids of asparagus, but broke it down among four different trucks to deliver directly to the stores,” he explains.

Customers staging product can do so under better conditions and with greater ease compared to open-air markets according to Vena. “In the old-style markets, the product must be put into trucks right away because of cold chain considerations,” he states. “In our facility, buyers have as much space and time to work as they want.”

Buyers report PWPM merchants are carrying more variety in response to market demands. “Twenty years ago, most wholesale merchants specialized in just a handful of things,” says Al Kasharian, owner of Kash’s Farm in Hackettstown, NJ, a small wholesale produce business and farm. “Now, you find just a about anything at the market, including many specialties.”

Levin comments how serving a large mix of ethnic customers including Hispanic, Asian, Indian and African results in their carrying a more varied 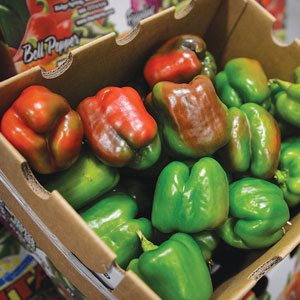 product line. Though Ryeco has always been full-line, the company continues to increase its product mix as well. “We recently upgraded our computer systems to accommodate more items,” says Colace.

Vena reports growing interest in lesser-known tropical fruits such as lychee, longan and dragonfruit. “A combination of factors is contributing to the demand,” he says. “An ethnic driver is no longer crucial to pull demand. Now with social media and television influence, people are looking for items they previously didn’t know existed.”

NAPCO now imports directly from Europe, Israel, and South America. “It’s all about finding the best we can put in front of our customers and help them grow their business,” states DiFeliciantonio.

Specialized packaging is another growth area for PWPM companies, and Vena reports greater involvement in special packaging both for foodservice and retail. “We’re doing business with newer segments of the industry, and they require very specialized products and presentations,” he explains.

Procacci notes growth in its repacking business as well as other market segments. “We experience greater interest in private labeling,” says Maxwell. “We also see more floral big-box business now in addition to smaller retailers. And, in tropicals, our Miami office enables us to stay well supplied and remain competitive even in short situations.”

While many customers still walk the market, others chose to communicate using technology. “The industry is adapting modern technology, and the drive for efficiency reduces face-to-face interaction,” says Emily Kohlhas, marketing and business development for Vena. “It’s our job to learn to communicate with them. This is an exciting opportunity to translate a century of experience in produce to a modern, multimedia marketing program.”

Vena’s marketing efforts focus on sharing information about products, growers, and the specialty produce industry. “Our current initiatives focus primarily on social media, email and print with an emphasis on colorful, dynamic media,” says Kohlhas. “We are also teaming up with the nationally renowned nonprofit, The Food Trust, to create a series of resources aimed at helping small-scale retailers and corner-store owners learn to navigate the market, merchandise, and handle fresh produce as part of their Healthy Corner Store Initiative.”

Giordano points out the importance of investing in education and technology. “Food safety will be a crucial future aspect of our business,” he states. “With the evolution of different requirements, we will need to adapt and educate and technology plays a key role for this.”

TMK is using an online ordering system developed by the technical support system company, Orbis Solutions, Inc. “During this first phase, we are using the system internally to work out the kinks,” reports Kovacevich. “So far it works well, and we enjoy the freedom offered by the mobility. Phase two will be to introduce online ordering to our customers.”

Ryeco is in the process of creating an online photo library of its offerings along with online ordering. “Customers can call in or create orders off the Internet — whatever is better for them,” explains Colace.