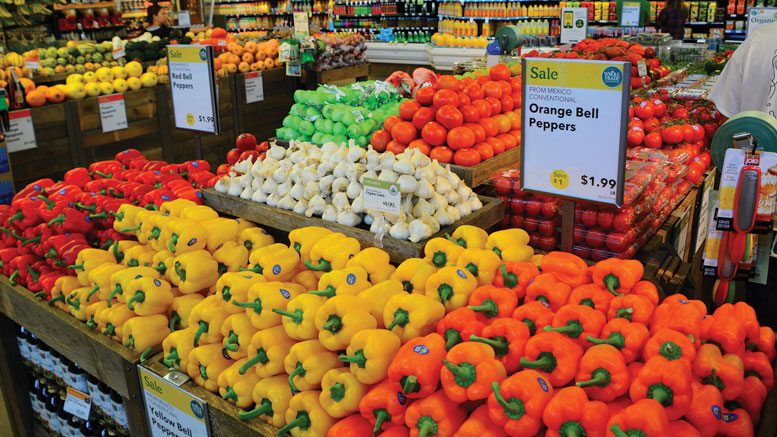 Colorful offerings, an array of sizes and shapes, attractive packaging, taste-tempting usages from snacks to center-plate meals and prices to delight — these are just a few of the reasons why sweet peppers have grown to represent 2.7 percent of total produce and 6 percent of total vegetable sales for the 52 weeks ending Oct. 29, 2016, according to data provided by Chicago-based Nielsen Perishables Group.

Want to boost your sweet pepper sales? Consider these five ways to maximize your sales this year.

“Green bell peppers are huge, especially because of good supply and pricing, but red bells are also gaining in popularity,” says Jason Kazmirski, director of produce and floral merchandising for the 70 independent grocers that are part of Tukwila, WA-based Northwest Grocers, which operates under banners such as Thriftway, Payless Foods, Red Apple Markets and IGA Markets.

“We carry red, yellow and orange bell peppers, in addition to the traditional green,” says Randy Bohaty, produce director at B&R Stores Inc., an 18-store chain based in Lincoln, NE, which operates under the Russ’s Markets, SuperSaver, Apple Market and Save Best Foods banners. “What makes these other colors popular is they are sweeter and more mild-tasting than the green.”

The sweetest of all bell peppers is the red. “Scientists tell us that a single red bell pepper contains three times the vitamin C of an orange,” says Chris Veillon, director of marketing for NatureFresh Farms in Leamington, Ontario, Canada. The sweet pepper category is blossoming with a variety of shapes and sizes.

For example, Farmer’s Best International, in Rico Rico, AZ, offers elongated rather than the customary block-shaped green and red bell peppers. This product, grown exclusively in shadehouses in Mexico, has seen steady demand from both retail and foodservice customers, according to Steve Yubeta, vice president of sales and marketing.

Long and skinny is the best way to describe the Sweet Twister pepper, available in red and yellow, and dubbed by grower Mastronardi Produce Ltd., in Kingsville, Ontario, Canada, as perhaps the sweetest pepper in the world. The company packs these peppers in resealable and recyclable bags with recipes on-pack by celebrity Chef Roger Mooking.

On the size front, Bailey Farms in Oxford, NC, is promoting its newest item, the BellaFina, or baby bell peppers. These red, orange and yellow field-grown peppers are available year-round and are one-third the size of traditional block peppers.

“The advantage is that because they are smaller, they are less expensive and present an affordable way for customers to include colored bell peppers in a variety of recipes,” says Randy Bailey, president and founder.

Sweet mini peppers are gaining in sales. “Minis are definitely the fastest-growing segment in the category; I do not think we are close to the saturation point,” says Mike Aiton, marketing director for Prime Time International in Coachella, CA.

Sweet mini peppers, due to their bite-size and thin wall structure that offers a crisp crunch, are finding favor for snacking.

“The mini peppers aren’t cannibalizing sales of the regular bells. That’s because there are two different usages. The small peppers are more for snacking, and the traditional larger ones are geared more toward use as an ingredient,” says Northwest Grocers’ Kazmirski.

This year, Robinson Fresh will be testing new sweet pepper varieties in Davis, CA, Tifton, GA, and the Dominican Republic. “One of these will likely be a larger version of the current mini sweet size,” says Sean Callahan, general manager of dry vegetables for the Eden Prairie, MN-headquartered company.

Unique packs of color combinations and counts are pushing the mark in gaining more sales, according to Veillon. Examples include a 3-count rainbow pack with red, orange and yellow peppers, and a 3- or 6-count stoplight pack, available in similar counts but with red, yellow and green peppers. 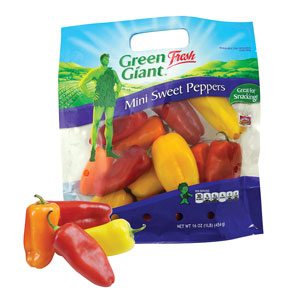 “The stoplight pack has a 64 percent market share, up 11 percent over the past year. However, that doesn’t mean all packaging is created equal in all markets. Don’t get stuck with a repackaging option that isn’t ideal for your needs. Multiple options mean you can find the one that works best for you. Finally, the value-added side of the equation continues to bolster the produce department ring. Cut peppers are no exception. We expect to see more growth in this segment,” says Robinson Fresh’s Callahan.

Mini sweet peppers are most often sold packaged due to their small size. “We sell the minis in 8-ounce, 12-ounce, 1-pound and 2-pound packs. We also have a 3-ounce single serve snack pack,” says Bailey Farm’s Bailey.

All peppers, including sweet and hot, are displayed in one big destination display at B&R stores. “We find that the green bells draw customers to the category, and then they see the other colors, shapes and sizes. We also offer chile peppers in the same display. This way, it makes it convenient for customers to find everything from the sweets to those with heat,” says B&R Stores’ Bohaty.

According to Prime Time’s Aiton, many retailers now carry around 20 SKUs of peppers, given the increased demand for different flavor profiles and packaging preferences. “Merchandising the different and unique colors, shapes, sizes and flavors makes a striking display because of the vibrant colors and overall interest in the category.”

Most retailers dedicate anywhere from 4 to 16 feet of space to sweet peppers, according to Callahan. “Avoid stacking peppers more than two layers deep. If stacked any higher, there’s a chance the bottom peppers could be damaged,” says Farmer’s Best Yubeta.

Beyond a one-stop-shop presentation, Veillon suggests cross-displaying peppers with other greenhouse-grown items in the produce department. Some retailers add a second display of sweet mini peppers with other fresh-cut or convenience-packaged produce in a snack set, according to Hurley Neer, sales and operations manager for eastern vegetable sales at L&M Companies in Raleigh, NC.

The consistent growth and interest in sweet peppers by chefs is helping drive the category, according to Aiton. “Realistically, we estimate that about 30 percent of our peppers are used by foodservice. Therefore, secondary and tie-in displays at retail are a good idea to suggest the versatility of peppers and their ability to be served both raw or as a part of the main course.”

Positioning sweet peppers in the meat department works for shoppers looking for a way to add a fresh vegetable to their dinner’s grilled protein, says Callahan. “This is not only for spring and summer; throughout the fall and winter months, grilled or sautéed peppers are an easy, flavorful and low-calorie way to add a healthy side dish. Value-added sections are evolving with more sophisticated options as consumer’s component-shop for mealtime. This is why we are seeing options such as sauté mixes, veggie kabobs and soup starters that incorporate sweet peppers, with labelling that includes usage ideas and cooking instructions. These offerings can trigger impulse buys by providing shoppers with easy meal solutions.” 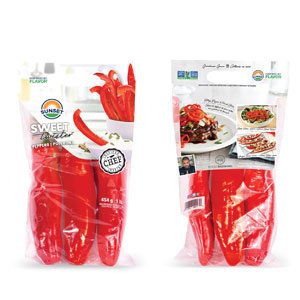 Regular price promotions enable B&R stores to expand shelf space and sell more peppers, says Bohaty. “We’ve especially had good success with the mini sweets. More consistent supply gives us an opportunity to drop the price on these, take the risk out of the purchase and create new customers for the product.”

Aiton recommends featuring a different SKU of pepper each week accompanied by suggested uses and what flavor and heat profile to expect. “Pricing peppers by the each rather than the pound is recommended, as it is more consumer-friendly and avoids sticker shock,” says Daniela Ferro, communications coordinator for Mastronardi Produce.

Beyond price, other promotional strategies include demos, locally grown and holiday call-outs and themed ads. “The biggest barrier to purchase is trial. Believe it or not, there are still consumers out there who have not tasted multi-colored bell peppers. We participate in demo programs funded by the OGVG (Ontario Greenhouse Vegetable Growers) to help get consumers sampling Ontario-grown bell peppers. The demo programs are a great way to introduce the product and generate immediate sales,” says NatureFresh Farm’s Veillon.

“Take advantage of locally grown or regionally correct trends to tout peppers,” says Brian Rayfield, vice president of business development for J&J Family of Farms in Loxahatchee, FL. “Use print and digital ads, as well as in-store point-of-sale to call out the freshness and abundance of the product.”

Sweet red bells are especially popular at certain times of the year, including winter holidays and Valentine’s Day, according to Farmer’s Best’s Yubeta. “We experience an uptick in sales around these times of the year,” he says.

One successful way Northwest Grocers’ retailers promote sweet peppers in ads is based around a recipe. “We’ll do a fajita-themed ad that includes red, green and yellow peppers,” says Kazmirski.

Seasonality and supply shortages are pretty much a thing of the past when it comes to sweet peppers. So too may be big quality and price gaps based on how peppers are grown. Where and how these colorful veggies are now being cultivated presents sourcing opportunities for retail buyers.

“We buy based on what is in season,” says Jason Kazmirski, director of produce and floral merchandising for the 70 independent grocers that are part of Tukwila, WA-based Northwest Grocers. “That means U.S. field-grown, Mexican field, or shadehouse-grown, or from hothouses in Canada. If there’s a big shortage, which is really rare nowadays, we might see some peppers from Holland here on the West Coast.”

Peppers are grown locally and regionally in some 30 states throughout the year, as well as imported into the United States primarily from Mexico, Canada, Holland, Spain and the Dominican Republic, according to Mike Aiton, marketing director for Prime Time International in Coachella, CA.

“Supply is seamlessly available year-round and not really impacted, even by weather events in one area, because we grow in several areas to assure a good, solid supply chain of this staple item,” says Hurley Neer, sales and operations manager for eastern vegetable sales at L&M Companies in Raleigh, NC. “Multiple growing areas also mean we can accommodate promotions whenever retail customers would like.”

Quality is what Randy Bohaty, produce director at B&R Stores, an 18-store chain based in Lincoln, NE, looks for when sourcing sweet peppers. “It’s not so much how the pepper is grown, but if it’s of good, high quality. That’s what I look for first.”

Sixty-five percent of sweet peppers sold in the United States were field-grown; the remaining 35 percent were hothouse grown, according to data supplied by the Chicago-based Nielsen Perishables Group, for the 52 weeks ending Oct. 29, 2016.

“There’s a premium price for hothouse grown peppers because they tend to have perfect shape and color. Because of the necessity to grow in protected environments in Mexico, the scale of production has recently tilted heavily toward inside grown. We have both, inside and field-grown, because our customers have a different idea of what works in their market, so we do our best to accommodate any requests.”

Some growers are working to achieve the perfect look of a hothouse-grown pepper at the price of one that’s field harvested.

“Our company has made a big investment in proprietary seed development that enables us to grow high-quality red and yellow bell peppers in the field, something formerly reserved for protected agriculture,” says Brian Rayfield, vice president of business development for J&J Family of Farms, Loxahatchee, FL. “After trialing, we’re now in the midst of commercial production of these varieties in Florida. Our plan is to have this product available year-round with growing areas in Georgia, Tennessee, North Carolina and Canada. We really think this will blow up the category with significantly greater supply and a lower cost.”