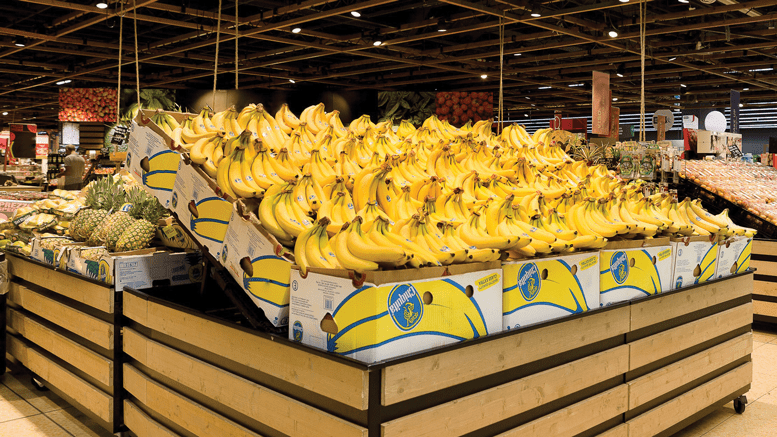 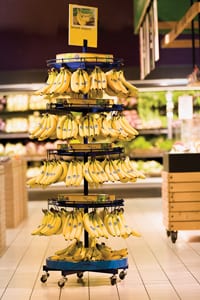 They might not be new, locally or even domestically grown, fancifully packaged or conveniently fresh-cut, but there’s no denying U.S. consumers are bananas for bananas. This tropical fruit ties with potatoes for the highest household penetration, at 86 percent among top 10 fruit and vegetables categories, according to FreshFacts on Retail, 2017 Year In Review, published by the Washington, DC-headquartered United Fresh Produce Association. What’s more, this same report shows bananas are the No. 1 category in the produce department in terms of volume sales.

“Everyone buys bananas, whether they are on the shopping list or not,” says Richard Stiles, director of produce and floral for Redner’s Markets, a Reading, PA-chain with 44 markets and 13 quick shoppes in Pennsylvania, Maryland and Delaware. “They remain No. 1 for us and a key category. I think it’s because they are so easy to eat, either out of hand as a snack, to put in smoothies, sliced over cereal and to bake with.”

The banana’s broad appeal makes it tempting to think this fruit sells itself. Yet, there are key ways retailers can assure this best-seller stays this way.

Cavendish is the predominant variety of banana imported into and sold in the United States. It’s distinctive for its oblong shape, yellow color when ripe, and creamy sweet flesh. Recent concern for this variety has arisen due to a fungal, soil-dwelling disease that causes banana plants to wither and dry up. This disease, caused by a strain that is called Tropical Race 4 (TR4), has had devastating effects on banana plantations in several parts of the world such as South-East Asia, Australia and the Middle East.

“There are currently no alternative varieties that can be grown in sufficient, commercially viable volume to replace the Cavendish,” says Dionysios Christou, vice president of marketing for Del Monte Fresh Produce N.A. in Coral Gables, FL. “However, all stakeholders are taking steps to protect this variety with aggressive plans to stop the spread of this disease.”

The good news for U.S. consumers and retailers is that the ubiquitous Cavendish variety is not going away anytime soon, according to Bil Goldfield, director of corporate communications for the Dole Food Company, headquartered in Westlake Village, CA. “Of course, Cavendish is just one of the many delicious varieties of bananas available. Specialty bananas continue to be a major trend that has grown in recent years, as consumers are becoming aware of options beyond the traditional Cavendish. We offer a variety of specialty bananas to keep up with demand, including baby bananas, plantains and red bananas. These varieties are featured at our media and blogger events and often included in our unique recipes and serving suggestions, which is building awareness and encouraging trial of these unconventional bananas.”

Specialty bananas account for 3.1 percent of total category sales, with plantains being the most popular specialty with 2.7 percent share and all others only being 0.4 percent, according to 2018 Nielsen Perishables Group data as supplied by Fort Lauderdale, FL-based Chiquita Fresh North America, LLC.

“Plantains, in contrast to conventional bananas that are mainly consumed ‘as is,’ are eaten almost exclusively as the base of a dish at dinner or lunch,” says Chiquita’s Jamie Postell, director of sales, North America. “Mini (baby) bananas cater to kids, while red bananas are emerging. Red bananas are shorter, plumper and heartier than the average banana. Its flavor is sweet and creamy with raspberry highlights. Manzanos are a stubby, thick-skinned, golden yellow fruit that is commonly known as the ‘apple banana.’ This gourmet banana has a delicious, sweet taste with a hint of apple and strawberry.”

There has been increased attention and shelf space for the plantain segment, especially where sales continue to grow at a fast pace as consumer demographics continue to change in North America, according to Del Monte’s Christou. Additionally, “as consumers have developed more sophisticated tastes and as the trend for healthy eating and interest in new and non-traditional foods continues to grow, so does the demand for exotic and specialty bananas.”

Robert Schueller, director of public relations for Melissa’s/World Variety Produce, in Los Angeles says, “We have seen a growth of 10 percent and 12 percent for plantains and baby bananas, respectively, in non-Latino supermarkets.” 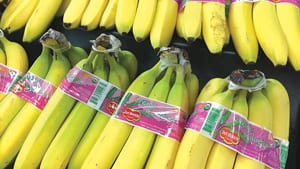 Sales of organic bananas are growing, according to Redner’s Markets’ Stiles.

Organically grown bananas contributed to 1 percent of organic produce sales, and their popularity is on the rise — growing at double digits vs. other organic produce items, according to 2018 Nielsen Perishables Group data as supplied by Chiquita.

“There appears to be a higher demand on the West Coast, although organic bananas are sold across the United States,” says Del Monte’s Christou.

On the production side, organic represents nearly 10 percent of total banana exports for Dole, according to Goldfield. “It’s no secret that organic produce is now part of the mainstream, and that’s especially true of America’s favorite fruit. We are now the world’s largest grower and distributor of fresh organic bananas. To cater to this growing market, we have launched innovative marketing efforts that include a dedicated website and organic-specific social media pages.”

“If conventional bananas are not available, 60 percent of shoppers won’t switch to organics.”

Both organic and conventional bananas have an important role on the retail shelf, according to Chiquita’s Postell. “A recent Nielsen study showed the organic produce shopper demands a variety of organic fruits and vegetables. The organic shopper is most likely to leave a retailer to purchase organic produce in other stores, if the only variety available is conventional. This is particularly strong for categories such as oranges and potatoes. However, the dynamics in the banana category are quite different, with 80 percent of shoppers surveyed stating they are most likely to switch to the conventional variety of bananas if organics are not available at that retailer. On the flipside, if conventional bananas are not available, 60 percent of shoppers won’t switch to organics.” 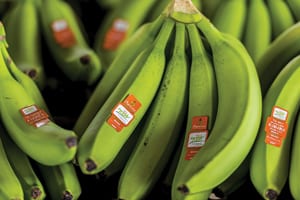 Ripeness sells, says Jason Kazmirski, director of produce and floral merchandising for the 70 independent grocers comprising Tukwila, WA-based Northwest Grocers, which operates under banners such as Thriftway, Payless Foods, Red Apple Markets and IGA Markets. “We order (Stage) 3 to 3.5 and display in our stores. Stages 4 and 5, when the fruit is more yellow than green, moves best. Green unripe fruit on display stops sales. No one wants to take it home and wait for a couple of days for it to ripen.”

The eyes decide when shoppers buy bananas, as color and appearance are among the top drivers in their decision-making, according to Chiquita’s Postell. “Therefore, recognizing what color shoppers expect on the shelf and what color they expect for eating is key to managing shoppers’ expectations on the shelf. Our research has shown that consumers most prefer to buy bananas in color 5, but would also buy them in color 4 and 6.”

Some retailers ripen bananas themselves, while others look to a wholesaler or importer to ripen on their behalf.

“Ripening will always be a collective effort between grower and buyer,” says Goldfield. “We generally sell green fruit and do very little ripening directly. However, our Technical Services Department partners with our wholesale and retail ripeners to ensure their ripening centers, processes and procedures are all operating efficiently and maximizing quality.”

Bananas are sold toward the front of the produce department facing a high traffic area at Redner’s Markets. “We want customers to see them immediately,” says Stiles
Since bananas can be the first stop in the produce section for many shoppers, an attractive, well-stocked, well-marketed display with the color stages of ripeness customers desire can translate into higher overall produce sales.

Alternatively, “due to bananas’ unquestioned appeal with customers, a robust, always-stocked display in the middle or back of the produce department is one of the most effective ways to pull a steady stream of shoppers into the department and raise the bar for all produce,” says Dole’s Goldfield.

Beyond display location, retailers should adopt tactics such as eye-catching promotional items and merchandising activities that entice and educate consumers, recommends Del Monte’s Christou. “This might include development of seasonal point-of-sale (POS) for shelves and improved labeling information about the product’s nutrition and convenience.”

Conventional bananas are mostly displayed separately as end caps or on a separate primary shelf table within produce. With the growing popularity of specialty varieties, it’s important they are given a prominent display next to conventional bananas in the produce department.

“Savvy retailers can capitalize on the fact many consumers are actively shopping specialty bananas by keeping a robust display of ripe varieties and even providing POS signage that highlights the many culinary applications and usage ideas of these bananas,” says Goldfield.

“This can hasten ripening and ultimately shrink,” says Mayra Velasquez de Leon, president and co-founder of Organics Unlimited. “That’s why we band each bunch and sticker each fruit. You also want a distinction in a display, so shoppers know which bananas are organic and which are conventional.”

Vanilla wafers, banana bread mixes and plantain chips are all cross-merchandised next to bananas in the produce department at Redner’s Markets. “We’ll also create secondary banana displays in the cereal aisle, over by dairy and at the check-out registers,” says Stiles.

Leveraging cross-promotions and secondary displays of bananas with other categories is an excellent way to build basket ring, according to Chiquita’s Postell. This recommendation is the result of a Total Store Connectivity Study the company commissioned from Nielsen in 2014. This research evaluated sales correlations, basket and buyer connections, and found bananas are one of the most connected fresh categories in the store. In fact, they’re strongly linked with 135 categories that represent 63 percent of total store dollars and span 12 departments.

“The study has served as a foundation for us to create a broad but focused approach to meet consumer priorities around breakfast, snacking and healthy eating through leveraging bananas’ proximity to other produce, their connectivity of occasion specific items across the store, and their trip and buyer connection. For instance, we innovated the Cooking Lab Recipe Promotion in which consumers were encouraged to create recipes with bananas based on 3 to 4 ingredients. The objective was to show the versatility of bananas while increasing total store basket value. One of our retail partners that stood out in the execution of this promotion outpaced its competitive market by a 16.4 percentage point in volume sales growth,” notes Postell.

Instead, they tend to buy only what they can handle and eat at a time, so there usually isn’t a big sales spike if bananas are discounted. On the other hand, what we try to do is make sure they buy some bananas each time they come in.”

The most effective plan is an integrated promotional strategy, according to Chiquita’s Postell. “It starts with the right everyday price point and the use of the different promotional tools to maximize volume lift, from depth of discount, seasonality, frequency, ad length, product mix and secondary placements.”

Participating in themed promotions can also be effective. For example, Dole’s Powering the Hero Within campaign continues this fall with a celebration of original Disney hero Mickey Mouse’s 90th anniversary, featuring recipes, in-store, digital, social media, public relations and blogger/influencer extensions. The company will continue the nutritional collaboration into 2019, celebrating some of the most-anticipated Disney and Marvel releases, as well as Dole’s key fruits such as bananas. Another example is Chiquita’s recently-launched partnership with Shazam. By scanning the iconic Blue Sticker on the company’s bananas via the Shazam app, consumers can virtually ‘peel back’ the label to learn more about Chiquita’s commitment to transparency and sustainability.

Looking ahead, “one of the main challenges of selling more bananas at retail is how to influence the trade and continue to create value for retailers and shoppers. That is, taking the conversation out of the commodity and reframing it to show how bananas are an amazing superfood born from nature,” says Chiquita’s Postell.