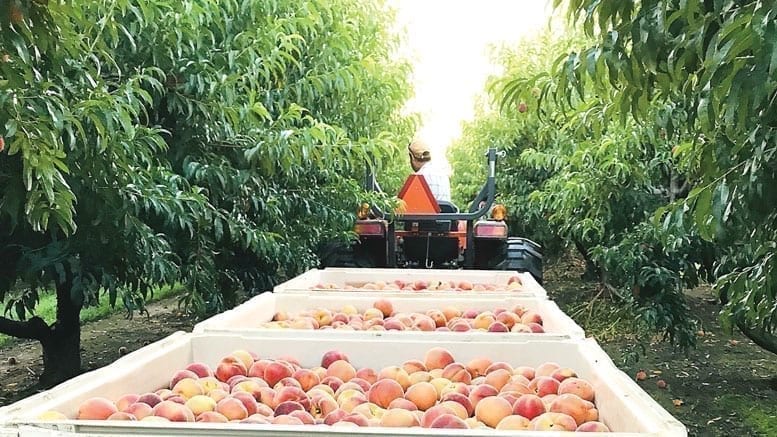 So fresh you can smell it.

As spring heads toward summer, the time has come for a celebration in produce of the uniquely delightful sweet aroma and flavor of fresh peaches.

This traditional annual celebration begins, more than anywhere else, in orchards concentrated in a handful of states clustered in the Southeast that send fresh fruit to most of the country.

“Our season is early May to early September, and peaches are synonymous with summertime,” says Will McGehee, partner of Genuine Georgia Group, Fort Valley, GA. “We are able to service the millions of customers who live on the East Coast within 12 to 36 hours of that peach hanging on a tree. Freshness is so important to peaches because it is a porous fruit that loses flavor the longer it’s in refrigeration.”

The Genuine Georgia Group is a sales and marketing partnership that has helped the state’s commercial peach farmers increase their sales and acreage in recent years after decades of slow decline.

Per capita fresh peach consumption has slowly but steadily declined after reaching a peak of just more than seven pounds in 1980, according to U.S. Department of Agriculture statistics, but there are still tremendous rewards for offering the best product.

And the best product is usually grown, harvested, and shipped just hours from the market, and displayed with care and flair.

Unlike fruits that hold up well in storage, like apples or pears, peaches have a relatively defined window close to harvest and they can only be displayed for a short time.

“The best time to promote southern peaches would be mid-June through August,” says Michael Blume, director of sales and marketing at Keystone Fruit, Greencastle, PA. “Eastern peaches can be promoted during the entire month of August. Big displays of fresh peaches still sell best — but peaches are highly perishable, so it is recommended displays are built with the mindset they will sell through in a day.”

Keystone Fruit, which merged with Progressive Produce three years ago, is a grower-shipper that also sources fruit from other areas, including peaches from the Southeast.

“Peach displays need to be worked at store level every few hours,” notes Blume, continuing the freshness theme. “Displaying peaches off refrigeration is okay, and that will trigger the ripening process. So, although the aroma will entice additional sales, displays may need to be worked more frequently.”

One way to maximize sales during the relatively short fresh peach window is to build eye-catching displays in prominent locations.

“For many people, large peach displays in the front or center of the produce section signal that summer is here,” says Matt Cornwell, account manager at Titan Farms, Ridge Springs, SC. “The colorful boxes they ship in not only provide the perfect structure to build a display, but they tell the story of where the fruit came from and who grew it. These are all things the modern consumer wants to know. The bright color and aroma provide a focal point to the produce section and most importantly drive sales.”

Titan Farms is the largest peach grower on the East Coast, with 6,200 acres of orchards, and also grows more than 1,000 acres of vegetables including bell peppers and broccoli.

Cornwell says sales can be strong enough during the peach harvest to warrant a second display in another area of the department.

“By utilizing a secondary pack or display, a retailer can serve different consumer preferences,” he says. “We find many retailers are building a display with bulk fruit and complementing that display with a two-pound pouch bag of smaller size fruit as a secondary item. When all these steps are executed correctly, and peaches are given space in the forefront of a produce department, retailers can be assured customers will come back time and time again for that great tasting southern peach.”

Some state or grower groups offer help with merchandising to increase sales of their peaches.

“Florida retailers have an advantage when promoting Florida peaches in that they can capitalize on the distinctiveness of the product as well as the fact that it is locally produced,” says Mindy Lee, bureau chief of the Fresh From Florida program of the Florida Department of Agriculture and Consumer Services, Tallahassee, FL.

“During the 2018–2019 fiscal year, the Florida Department of Agriculture and Consumer Services and its partners conducted promotional activities for Florida peaches throughout the South and in Florida Walmart and Hitchcock’s stores, as well as United Supermarkets in Texas,” says Lee.

Be Known as Freshness And Flavor Destination

Peach eaters can be big spenders, and shippers urge taking advantage of the relatively short period when fresh peaches are available from the Southeast to increase sales throughout the department and store.

“A representative from Nielson showed us some impressive data a few years back that highlighted the fact peach eaters are the customers you want,’” says Genuine Georgia Group’s McGehee. “The average basket ring of a peach customer was significantly higher than a customer without peaches in the basket. The take-away? Promote peaches often and do it big, and department sales will follow. Focus on being a peach destination in your local market.”

The key to merchandising peaches to all consumers, young and old, is rapid turnover and vigilant culling to make sure the fruit looks, smells and tastes irresistibly fresh.

“Proper handling of peaches is key,” says Cornwell of Titan Farms. “We take great pride in growing, packing and shipping fruit that is tree-ripened, and we want to ensure the customers have the best eating experience when the fruit makes it to their home. Making sure displays are fresh, fruit is held at the right temperature and then displayed at the correct temperature has a huge impact on flavor. We put a lot of trust in the distribution centers and store-level produce department employees to help make sure fruit is in optimal condition when it’s presented to the consumer.”

California is, by far, the number one peach producer followed by South Carolina, and not long-ago New Jersey made a few headlines by nosing out Georgia for the No. 3 spot.

But in Georgia, and throughout the Southeast, volume takes a back seat to a tradition of flavor.

“Georgia is known as the peach state not because we are the largest producer of peaches — California is No. 1, and South Carolina is No. 2 — but our reputation comes from flavor,” says McGehee. “Everything we do in the growing, harvesting, packing and shipping produce cycle is centered around flavor. Flavor is our competitive advantage and we hang on to it tightly.”

“We are truly blessed to be able to grow peaches in such a perfect region of the country.”

Celebration of flavor also drives everything peach-related in South Carolina, the largest producer in the Southeast.

“The big thing we’ve always focused on is quality; we want to be known for the taste,” says Kyle Tisdale, marketing specialist at the South Carolina Department of Agriculture, Columbia, SC. “A lot of growers will tell you it’s the soils we grow in, the climate, and our ability to ripen them on the trees. The acidity in the soil helps; it generally produces a flavorful peach.”

Although Florida does not harvest peaches on the same scale as Georgia or South Carolina, the state’s fruit also serves markets throughout the Eastern seaboard and Midwest.

“Florida growers over the past three years have shipped peaches to the northeastern United States and the Great Lakes region. Florida product has appeared at the terminal markets in Miami, Baltimore, Philadelphia, New York, Boston and Chicago from the end of March until mid-to-late May,” says Lee. “New York has had the most availability, followed by Chicago.”

Growers in the Sunshine State produce generally smaller peaches but they, too, emphasize flavor.

“Most Florida peach varieties are smaller than the typical peach in a grocery store, and have firmer flesh and an exceptional flavor profile,” says Lee.

Ask Southeastern peach farmers what makes their fruit so special and they may wax poetic about the local geography, soil, or climate that makes for perfect growing.

“Titan Farms is located in an area of South Carolina known as ‘The Ridge,’” says Cornwell. “Our elevation, slightly acidic soils and hot, humid summer nights provide the perfect conditions to produce the best fruit in the market. We grow, pack, ship and sell every peach from our farm here in Ridge Spring, SC, so we know every piece of fruit that goes into the box will provide that great experience the customer is looking for in a southern peach. We are truly blessed to be able to grow peaches in such a perfect region of the country.”

Peach flavor and freshness are trending up, but overall sales are trending slightly down because younger people are not as keen on peaches as their parents.

One answer to this issue worth considering is the development of newer methods of communicating the peach story.

“People under 50 may not be reading newspapers,” says Tisdale. “We did a lot of print ads in the past; recently we’ve been doing more social media, television and radio ads.”

The industry spreads the news through the South Carolina Peach Council website and through shows on cable featuring content devoted to rural issues, RFD TV.

“Every time we run a TV episode we notice a spike on our website or Facebook page,” says Tisdale.

Fresh From Florida marketing for Florida peaches also includes social media awareness and recipes which are featured on a website.

“Fruit should not be stacked more than two layers deep on a display,” advises Lee. “Only display enough peaches for the day because changing temperature from cold storage to room temperature and back to cold storage is detrimental to some varieties and should be avoided. Utilizing the box with tops removed and tray-pack is an optimal display option.”

Another option worth considering is that while peaches are generally sold in bulk, there may be opportunities in also offering convenient bags.

“Grab-and-go bags of peaches are an exciting phenomenon,” says McGehee. “I was a bit of a skeptic at first because I thought people wanted to hand-pick their peaches and spend time feeling and smelling them. I was so wrong. A segment of the population still does that, but we have been blown away by the sales of Georgia Juicys and Georgia Fuzzies. Our 2# bag program has been a massive success, and they are actually bringing new shoppers into the category. Before this convenient package, we were missing sales to those shoppers. Now, we can capture both types of shoppers and deliver the most delightful eating experience.”