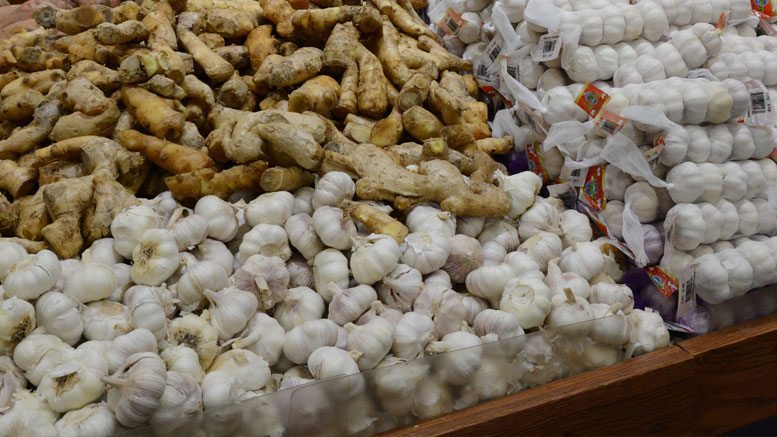 With abundant year-round supply, there are several ways to grow profit margins.

It’s been respected as a medicine and relished in cuisines from its native Central Asia to Europe and the Americas for more than 5 millennia. Today, garlic, a close relative of the onion, shallot and leek, represents 0.6 percent of total produce sales for the 52 weeks ending April 1, 2017, according to FreshFacts data supplied by the Chicago-based Nielsen Perishables Group. This may seem like a small number. However, the fact that this bulb-shaped plant is an ingredient in everything from soups to flavored nuts is what makes garlic a valuable category in the produce department.

“Garlic is pretty much a mainstream everyday seller for us, with good moves and good turns,” says Jeff Fairchild, produce buyer for New Seasons Market, a 20-store chain based in Portland, OR.

Sourcing, selection and savvy selling tactics are all ways to assure steady and even supplementary sales of garlic.

Garlic is a globally grown commodity. China produces nearly 80 percent of the world’s garlic, followed by India, the Republic of Korea, Egypt and Russia, according to 2015 data from the Food and Agriculture Organization of the United Nations. Together, these five countries produce almost 90 percent of the planet’s garlic. It is the remaining 10 percent of country producers such as Mexico, Spain, Argentina and domestically from California where many U.S. retailers prefer to source their garlic.

“I can have garlic in my warehouse from up to five countries at any one time, such as the United States, Mexico, Spain, Argentina and China,” says Paul Auerbach, president of Maurice A. Auerbach Inc., in South Hackensack, NJ. “Most retailers don’t buy Chinese. In fact, their specs will say non-Chinese. This is because of real and perceived differences in the product and customer acceptance.”

“We look first to domestic garlic, then Mexico and Argentina. That’s because some of our customers are skeptical about the safety of Chinese garlic, as well as the country’s labor practices,” says Fairchild.

To the east, James Clark, manager of the Fruit Bowl, a single store located in St. Thomas, U.S. Virgin Islands, agrees. “We try not to source garlic from China and instead look for California, Argentina and Spain.”

However, the appeal of Chinese garlic for some is low price.

“Some accounts are strictly about price and don’t care about country of origin as long as the garlic is good quality and the cheapest cost. Other accounts prefer premium garlic from California or Spain, both known for their larger bulb size and stronger flavor,” says Jim Provost, president of I Love Produce in West Grove, PA. “We liken it to the American beer market. Bud Light is by far the best-selling beer in the United States, so you want to carry it; but then again, you want to carry your premium brands to capture that side of the market as well.”

As for supply and demand in the present and future, Provost says, “the global market is transitioning from a situation where supply was short to the opposite situation, where there will be an abundance of garlic. If weather conditions cooperate, we should have a good supply of high-quality, promotable garlic for shipping in July and throughout the holidays and the winter cooking season.”

One reason supply is strengthening is because California starts its harvest in July.

“We expect our biggest crop yield in 10 years, with an anticipated 85 million pounds of fresh California heirloom garlic harvested during the summer,” says Patsy Ross, director of marketing for Christopher Ranch in Gilroy, CA. “California garlic is harvested once a year in the summer months. The rest of the year, we supply our customers with our California-grown heirloom garlic out of controlled atmosphere storage.”

Availability started easing up in March and April, when Mexico and to a lesser extent, China, began to export their freshly harvested garlic. This was followed by Spain, which commenced shipping in June, according to Louis Hymel, director of purchasing and marketing for Spice World Inc., in Orlando, FL. “With good quality and increased quantities, the stress of short supplies should ease market prices from their most recent record highs.”

In general, there has been a trend toward more imported garlic than in the past, says Sasha LoPresti, director of business development and food safety at A.J. Trucco Inc., in Bronx, NY. “This is partly due to exchange rates and partly due to larger production overseas combined with smaller domestic crops.”

“We expect our biggest crop yield in 10 years, with an anticipated 85 million pounds of fresh California heirloom garlic harvested during the summer. ”

Indeed, Peruvian exports of fresh garlic doubled during January to March 2017 as compared to the previous year, according to information published by AgrodataPeru, with more than half of this garlic going to the United States.

“Some garlic from Egypt is imported on a seasonal basis. The quantities vary from season to season, depending upon domestic supplies,” says Hymel.

In addition, “we are seeing a small volume of Vietnamese peeled garlic. This is probably the newest source to come into play,” says LoPresti.

The garlic category today is far from being a one-trick pony of only whole heads or bulbs. Today, grower-shippers offer a variety of forms.

Whole Heads. “We sell fresh whole knobs or heads in conventional and organic, black, elephant, green, peeled and jarred like minced and chopped,” says Robert Schueller, director of public relations for Melissa’s/World Variety Produce in Vernon, CA. “Most of these are available year-round.”

The best-seller at retail is fresh, loose heads, according to Auerbach. “We’ve seen a decline in the decorated braids that were big 15 years ago, because of a lower perceived value on the part of consumers.”

Companies such as I Love Produce sell packaged heads of garlic. “Our 5-bulb bag is our best-seller at retail. We carry this from both Spain and China. Prices will be at a level to promote ‘buck-a-bag’ or 99-cent ads with new crop in July. Since garlic has been very expensive the past two years, this is a great opportunity for retailers to provide a value to the consumer,” says Provost.

Purple Garlic. This is available seasonally from Mexico, Spain and Argentina.

“Some customers think purple garlic tastes better. That’s why we carry it, especially in the spring time, when there are good supplies out of Mexico,” says Fruit Bowl’s Clark.

Black Garlic. A product of Korea, black garlic is aged for a month in a high-heat fermentation process where it develops a dark color, soft texture and sweet, almost rich molasses-like taste.

“The market for black garlic is a small niche. Retailers who carry this product are either high end or have a large Asian clientele. Key to this product is that it’s used very differently than regular white garlic. Instead, it should be used like roasted garlic,” says Melissa’s Schueller.

Elephant Garlic. This specialty-type of garlic is available year-round. However, it can be difficult to find because it is only obtainable from domestic sources, says Schueller.

“Elephant garlic is larger than a regular head and it is milder in taste. I like to describe it like a sweet onion compared to a regular, more pungent one,” says Clark.

Spring or Green Garlic. Available from late February or early March to May, this product is the immature garlic harvested before the head develops, says Schueller. “It looks like a small-sized leek or green onion, but has a garlic flavor. Spring or green garlic is seasonal and domestic, and typically only sold at high-end retailers or farm stands. It’s typically used in soups and stews.”

Value-Added Garlic. Packaged peeled, chopped and minced garlic products continue to make up a bigger slice of the category. In fact, UPC-coded garlic accounted for 61.1 percent of sales in the 52 weeks ending April 1, 2017, according to Nielsen Perishables Group data, compared to 38.9 percent for random weight or non-UPC garlic.

“Peeled garlic is quick and easy to use. That’s what makes it popular,” says New Seasons Market’s Fairchild.

Fresh garlic, whether it be fresh bulbs with the skins or peeled cloves, are preferred by many home cooks because they provide the best flavor in recipes, says Christopher Ranch’s Ross. “Our peeled garlic is in demand by retailers, especially those that carry a lot of value-added pre-cut fruits and vegetables.”

One factor limiting the growth of peeled garlic at retail is shelf life. “Peeled garlic prefers refrigeration right around 32 degrees — near freezing, and most produce cases just cannot accommodate that. So, as a result, the shelf-life on the shelf is reduced and the peeled looks a little tired after a week or so,” says I Love Produce’s Provost. “If the consumer brings it home and it goes bad before he/she uses it up, the category suffers. We suggest consumers freeze any unused portion of the garlic they buy for a longer use period.”

Chopped and minced garlic products are convenience-oriented, but have a longer shelf life than peeled cloves.

“Consumers are always looking for value-added items, especially for produce that takes time to prep. Our ready-to-use garlic items, along with our squeeze bottle of minced garlic in conventional and organic, are best-selling items in U.S. supermarkets, according to IRI data,” says Spice World’s Hymel.

Organic Garlic. Organic demand is constantly increasing with no reason to believe it will not continue, says Hymel. “Farmers are continuing to increase organic production. However, conversion of conventional farm land into organic certified status along with the additional production cost are very expensive.”

While organic garlic does sell at a premium, agrees Maurice A. Auerbach’s Auerbach, “the differential between the two is narrowing, and we are seeing increased sales as a result.”

Peeled, jarred chopped and crushed and whole garlic are supplied in organic form by I Love Produce. “By far, the best-selling organic garlic is the bulk fresh. The bigger sizes and white varieties are the most appreciated in this market,” says Provost.

Produce merchandising is very important to maximize sales, says Hymel. “The best means to accomplish it is to carry a full line of garlic items.”

Most retailers will offer four to five SKUs, while some offer up to 10 SKUs, according to Melissa’s Schueller.

“Whole bulbs, 5-bulb packaged garlic and jar garlic seem to offer the best mix of products to meet consumer demand. One or two SKUs of organic is also a good idea in most retail settings,” says Provost.

Each retailer knows what works best for their consumer. “Some stores like a garlic center with fresh and value-added garlic. Others prefer to merchandise the fresh garlic next to the potatoes and onions, says Christopher Ranch’s Ross.”

While it is important for supermarkets to have a fixed location for garlic in the produce department, “cross-merchandising with recipe items creates incremental sales that increase profits,” says Hymel.

At Fruit Bowl, peeled packaged garlic is sold in a refrigerated case next to the meats, poultry and fish.

Garlic is often over-looked as a price promotion due to its staple nature, ingredient-size usage and year-round availability.

“Garlic is a good item to promote because once it’s harvested, there is a six- to eight-month predictable supply. Although, it’s pretty price inelastic. You don’t necessarily sell more if you lower the price, nor lose sales when the price goes up,” says Maurice A. Auerbach’s Auerbach.

A profitable alternative to price is promotions based around holiday usages.

“We developed a fun Halloween display box to promote garlic during that time of year,” says Ross.

Beyond this, adds Spice World’s Hymel, “the calendar is full of celebration times, such as the Fourth of July for barbecues, Thanksgiving, Christmas, Easter, Memorial Day and Labor Day, as well as the Chinese New Year, Cinco de Mayo and Columbus Day.”