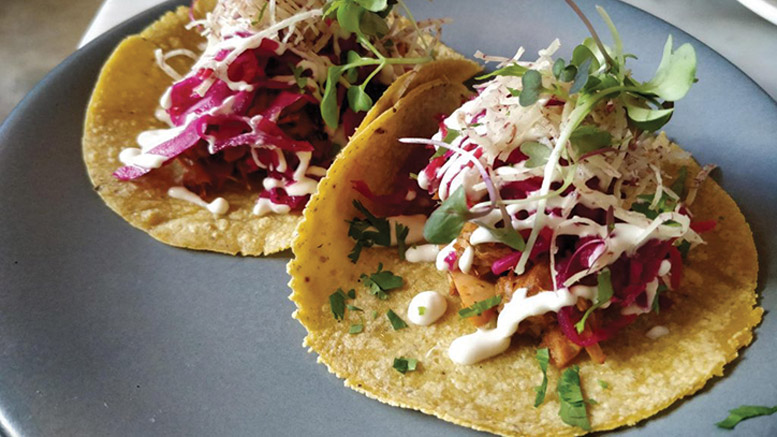 Matthew Ravenscroft believes in putting produce center stage. The chef de cuisine at Rosalinda, a vegan Mexican restaurant in the heart of Toronto’s downtown financial district, Ravenscroft isn’t satisfied to make vegetable dishes that mimic meat. He wants them to shine on their own.

“We’re pushing the boundaries to show the potential of vegetables,” says Ravenscroft, 29. “They should be celebrated.”

Rosalinda opened in May 2018 and has been well-received. “We get a diverse clientele, and most say the same thing when they try our food: they don’t miss the meat.”

Ravenscroft’s wife brought in her carnivorous father, who was skeptical about the idea of enjoying a meal that did not include meat. He was pleasantly surprised, says Ravenscroft. “It’s a misconception that vegetables aren’t filling.”

Produce is becoming more fun, he says, citing ever-inventive chef Rene Redzepi’s celeriac shawarma at NOMA in Copenhagen, Denmark. “It’s a new world of ideas that is changing how we look at vegetables.” Ravenscroft thinks patrons often overlook one of Rosalinda’s specialties, the locally grown Root Vegetables with Seasonal Mole. This season, the mole is made from plantains and walnuts. The restaurant’s supply comes from Bondi Produce in Etobicoke, ON, as well as local farms.

A customer favorite is the Rosaburger. Although it resembles a hamburger, the signature burger is a black bean patty made of beans, beets and brown rice, topped with what Ravenscroft calls eggplant bacon, as well as iceberg lettuce, avocado salsa and chipotle mayo. Other popular items include Squash Barbacoa Tacos, and starters such as Beet Tartare and Potato-Mushroom Flautas.

At the bottom of the menu sits a glossary to help diners define Mexican culinary terms (such as pibil, a cooking technique that flavors foods with fruits) as well as unfamiliar produce (jicama, achiote). A good idea, says Ravenscroft, but patrons often miss it and end up asking, “What’s this?” anyway.

A graduate of Ryerson University in Toronto, Ravenscroft has no formal culinary training. He has worked at non-vegan restaurants with omnivorous offerings, but he enjoys working with vegetables because he says they provide a blank canvas.

The atmosphere in the 139-seat eatery is casual and comfortable, with a relaxed elegance. Filled with flowers and greenery, light pours in, creating a greenhouse feel. “Even if it is bustling and booming in here, there is still a calming vibe,” he says.

In the back of the house, Ravenscroft points out the positive kitchen culture — inclusive and democratic. “Individually, everyone has a voice. As a team, we have one common goal. The servers are knowledgeable and passionate in their descriptions of the dishes.”

Rosalinda means “beautiful roses” and since the restaurant is filled with flowers, the name seemed fitting, says Jamie Cook, one of the owners. Cook owns it with partner Max Rimaldi, and chef and restaurateur Grant van Gameren, who created the menu. “I am obsessed with Blue Zones — those places where people live to be 100,” says Cook. “One of the blue zones is called Loma Linda, and someone said ‘Rosalinda’ and it stuck.”