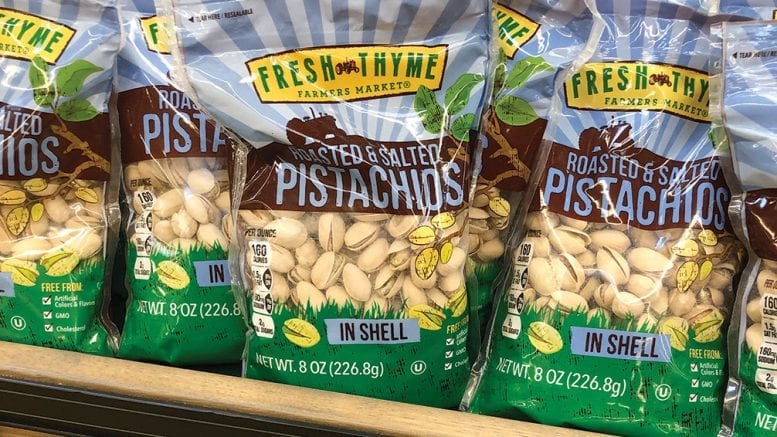 Shells or no shells, these nuts continue to rise, but can still benefit from promotions.

The pistachio category has a lot going for it – from general popularity and health benefits to well-funded national advertising from one of the most progressive brands in the food industry, Wonderful Brands.

Even nut-driven customers who have balked at the painstaking efforts to remove shells — opting instead for almonds or pecans — might be wooed by the lines of no-shelled pistachios and “kernels” hitting the market in a variety of flavors.

Those who still use the old-school method of cracking them open don’t seem to mind. These factors signal to retailers that there are plenty of opportunities to boost pistachio sales.

Research from American Pistachio Growers (APG) in Fresno, CA, shows pistachios are purchased by both men and women, according to Judy Hirigoyen, vice president, Global Marketing for the trade organization.

“An online survey we conducted in January 2019 in the United States further showed they are consuming them in fairly equal proportions,” she notes. “We believe this is because of the positive publicity surrounding the health benefits they have for both men and women: 77 percent said they are ‘very interested in nutrition’ and read labels.”

In that January online survey, 53 percent of respondents said they were looking primarily for pistachios in the snack aisle, while 19 percent chose the produce department, and another 16 percent said near checkout.

None of APG’s research has indicated consumers dislike in-shell pistachios, says Hirigoyen. “In fact, they are entertained by the shelling process and consistently describe it as ‘fun.’ However, kernel sales are doing well, and the option of buying pistachios shelled has become more common.”

She says pistachios have a tactile factor that many find calming, slowing the eating process and reminding the culinary community that they are one of the original “slow foods.”

In the January survey, 76 percent of the respondents said they consume their pistachios at home, and 69 percent said they were likely to be watching television while snacking. “So definitely, the ‘playfulness’ of pistachios is a factor,” points out Hirigoyen. “Just as important, however, is the fact that in our surveys around the world consumers identify pistachios as their favorite nut for flavor and taste.”

Hirigoyen says she and her group are unaware of pistachios ever having been in short supply, “and it surely won’t happen in the future with the U.S. pistachio production increasing exponentially. We harvested nearly one-billion pounds of pistachios in the 2018 harvest, and more trees are coming into production.”

Pistachios have become a year-round food, not just in the United States but in a variety of global markets. This is likely because consumers are looking for nutrient-dense foods that fit into an active lifestyle, especially in plant-based proteins.

When it comes to the most effective promotions, Hirigoyen says she likes to see health and nutrition education efforts that change consumer attitudes and are “transformational rather than transactional. This keeps the value proposition of the product high.

“While everyone thinks of the winter holidays for gifting, they’re a welcome gift for any occasion — everyone likes pistachios,” points out Hirigoyen. In terms of culinary applications, they are a trending ingredient, in part because of their unique color and flavor profile, and in part because consumers have said that they make any occasion special.

Mindful And Wonderful
Flavors are trending, says Adam Cooper, senior vice president for The Wonderful Company in Los Angeles, “and we’re excited to offer two new flavors of our Wonderful Pistachios No Shells – Honey Roasted and Chili Roasted.” Consumers are looking for snacks that are delicious, “but that are also healthy, and we meet that dual need with our products.” Wonderful Pistachios account for 75 percent of market share.

In-shell pistachios are popular among consumers for many reasons, according to Cooper. “We find consumers enjoy the process of cracking open the shells, and one of the reasons is because it supports mindful eating. Research shows the empty shells may serve as a visual cue to curb intake.”

As Wonderful Pistachios continue to share the benefits of eating mindfully, Cooper explains, it is also a well-positioned alternative for the increased number of fans looking for non-meat sources of protein. “Plant-based protein sources like Wonderful Pistachios provide the added bonus of fiber, which meat doesn’t offer. The easy-to-eat snack solution will launch with distribution in 55,000 stores nationwide, a larger debut than recent, high-profile flavored chips. Reaching for widespread appeal, the new flavors are both inspired by recent consumer market research. Honey is the most popular flavor in the snack nut category, and Hot & Spicy is the fastest growing flavor in the overall salty snacks category.”

POS displays in the produce department are important, says Cooper. “We find we have the most impact when we have multiple points of interruption in the store, both in produce and in other high traffic areas like the lobby and checkout areas. For the produce section, we have success because that’s when shoppers are thinking about health and about plant-based foods. Traditionally, nuts are found in the snack aisle, with unhealthy options like chips, but since our pistachios contain 6g plant-based protein and 3g fiber per serving, they’re complementary to the foods in the produce section.”

Cutting Through Clutter
Making the produce department easier to shop is a benefit to every product in it, a lesson that has not been lost on Setton Pistachio of Terra Bella, Inc. in Terra Bella, CA.

Conventional wisdom holds that packaged pistachios sell better at retail, while bulk pistachios are generally sold out of the shell and used for foodservice in cooking, baking or snack mixes. Though it naturally varies by region, Setton says, the Setton Farms 2- and 3-pound pistachio bags are “the optimal sizes for retailers. These offer a higher return to the retailer and greater value for the consumer.”

The company has done the work for consumers who don’t want to bother with shells. It recently introduced Seasoned Pistachio Kernels to the market, which feature authentically seasoned, dry roasted pistachios. Consumers can choose from Salt & Pepper, Garlic Onion, Chipotle BBQ, Jalapeño and Chili Limon to satisfy their cravings.

The increasing demand for pistachios has been thanks to the growing availability and gradually lower cost due to a crop size that grows each year. While Setton says he sees pistachios sold in bulk, he says it is not the ideal way for them, or for nuts in general, to be sold. “To preserve freshness, pistachios should be stored and sold in airtight containers / packages to prevent them from getting stale or soggy.”

Education and promotions are an invaluable way of driving sales. Pistachios are in high demand because of their health benefits and taste. Though the pistachio harvest occurs August through October, new trees are always being planted, and the crop offers enough pounds to merchandize year-round.

Setton Farms works with retailers and their marketing and nutrition teams to help educate consumers on all of the health benefits of pistachios. “We have a variety of unique and nutritious pistachio-based recipes available to encourage additional sales,” he says.

Retailers also can promote kernels as baking needs or be sold as gifts. For instance, the Setton Farms Pistachio Burlap Bag is a premium packaged gift item that sells particularly well during this time period.

Money-off or buy-one, get-one-free promotions generally work best to move pistachio SKUs through the register. In addition, Setton suggests cross-promoting them with beverages in order to maximize sales.