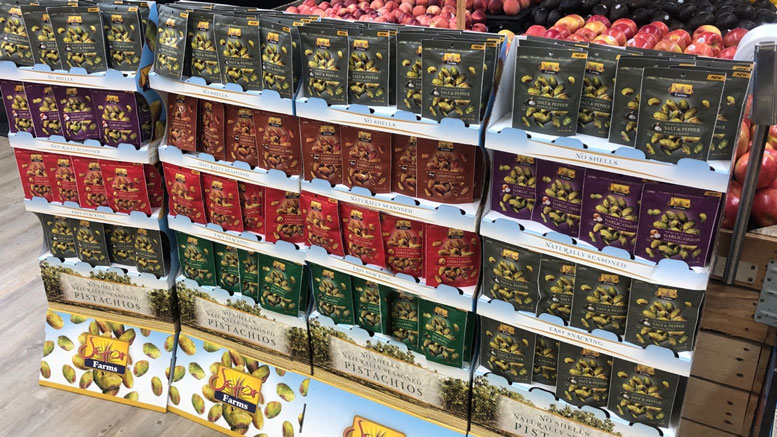 Pistachios continue to be the highest grossing snack nut with over $200 million in sales, according to Quarter-2 results from IRI InfoScan for the 13 weeks ending June 14. This means strong sales for shippers and retailers, as kernel sales continue to grow, giving an extra boost due to an already strong category of in-shell sales. Experts say putting a quality nut front-and-center at a good price point will boost retail numbers even higher.

Joshua Higgins, produce buyer for Tewksbury, MA-based Market Basket’s 83 retail stores, believes in the power of pistachios. “It happens to be an item that we have always told our retailers to put them out there where they are visible. If you put a good price on an item, as long as it is a quality product it will sell,” he says.

A few years ago, the chain embarked on a campaign designed to boost pistachio sales. “We just looked at the category and the landscape and at what other retailers were selling them at,” recalls Higgins. “We said geez, we work with an excellent vendor [Hanford, CA-based Nichols Farms] with excellent quality, and we put a good price on it so we instructed the stores to go out there with pistachios in a prominent location. It’s a high dollar item so it’s a good item to build a little extra volume.”

Hal Blanton, owner of Blanton’s Market IGA in Packwood, WA, has had luck selling in-shell packaged pistachios, along with other nuts, in the produce department year-round.

“We have a display of a lot of different nuts in produce,” he says.

However, when it comes to using shipper bins, Market Basket’s Higgins adds it’s not absolutely necessary. In fact Market Basket doesn’t use them in every store, and it really depends on a variety of factors, including size of the retail space. “A store with 40,000 square feet will still have success in produce if it is in a prominent highly visible area,” says Higgins. “We certainly communicate with the shippers, but every store is different. There is no cookie cutter store.”

If a retailer does want to take advantage of a merchandising display, many shippers are available to meet that need.

Joseph Setton, vice president of domestic sales for Setton Farms, with its main processing and production facility located in Terra Bella CA, says its displays and bins make it easy for retailers to market their pistachios. In fact, the company recently rolled out a no-assembly-required shipper display for its kernels, which highlights five different seasoned pistachios.

“They are very versatile and sturdy, yet being cardboard they can withstand any traffic situation,” he says. “The produce department can often be visually busy so we created our pre-loaded displays to cut through the clutter and help retailers sell more pistachios.”

The Wonderful Company, based in Los Angeles, also puts a large emphasis on displays to help its retailers sell pistachios. Adam Cooper, senior vice president of marketing, says the most impact is made when there is a core space for pistachios. “In produce, it’s powerful to have a core spot in front of the store,” he says.

“The sales velocity is two, three or four times as much when it is on display versus when it is not,” he adds. “That creates a big point of difference and that creates a lot more value for them.”

Cooper says these displays take up a small footprint and are shipped from the plant already assembled. But again, some retailers like Blanton opt for a permanent spot in produce, and that works as well.

“They sell best in a centralized location with all the other value-added and non-perishable produce items,” adds Rudy Placencia, vice president sales and marketing for Touchstone Pistachio, based in Fresno, CA.

Placencia says research shows pistachio consumption consumption skews more heavily to men. “There might be some similarities between the eating ‘ritual’ of shelling sunflower seeds and pistachios.”

Regardless of display type, one thing that is certain is that retailers selling kernels — along with in-shell pistachios — should remember to highlight the kernels in highly visible areas as well.

“Kernels are really growing,” says Market Basket’s Higgins, who says this has to do with their convenience, but also their versatility. “You are always going to have people who like to crack them. But the kernels are more versatile if you are making a recipe, for example,” he says. “That decision was good innovation for the category. All the other nuts are off their shell and chopped, so it just made sense to do that with pistachios.”

In fact, all three shippers say the kernels are a great way to compete with all the other nuts that are sold out of the shell.

“While pistachios are a commodity, and we have seen fluctuation on in-shell pistachios, syndicated data points to consistent growth on kernel consumption both at home and abroad,” Placencia points out. “Kernels are a hot item right now and command a premium in the space. People are willing to pay for the convenience of not having to shell them by hand.”

Wonderful’s Cooper adds that kernels have now become one of the fastest growing snack brands in the country, bolstered by the fact that new flavors are always coming out.

Is there a perfect size bag for retailers to sell? Not really, as again it varies by store and shipper.

At Setton Farms, the company offers a variety of displays for its different packages, and Setton says his company is probably the only one with a display that holds a 32-ounce pistachio. But then again, the company has had success selling its extra-large packs as well “showing retailers that a large bag with a premium product will be sold,” says Setton.

For Market Basket, Higgins simply says it varies by retailer, while Placencia says Touchstone has had a lot of success with the one-pound bag and the value size or club size.

“For kernels, there has been some success with a 12-ounce SKU,” he adds.

At Wonderful, again variety for retailers is the key. “For our bins, we have a portfolio of different bin types,” says Cooper. “At certain times of the year, we promote our family-size bags and flavor bins. We know the retailers have different needs.

Of course, those needs vary during the different times of the year. At Market Basket, Higgins says sales are pretty steady year-round, but once you get in late fall, sales start to rise and continues into November and December. And then there is the skyrocketing sales around the Super Bowl, as Placencia says at Touchstone this is the Number One peak followed by Christmas.

“Sales go up during Thanksgiving and Christmas,” adds Setton. “Pistachios are always viewed as a premium nut and given as gifts, and people are excited to give them.”

If that wasn’t enough ways to sell pistachios, other marketing messages retailers can capitalize on include the health benefits.

“Everyone knows pistachios are a great snack, and they also contain many healthy virtues that many people are not as aware of,” says Setton.

And with more and more consumers seeking plant-based foods, the nut fits into that category as well.

At The Wonderful Company, one of its major campaigns right now is pushing pistachios as a great plant protein. Cooper says retailers are really getting behind that message.

Another health benefit is the fact that in-shell pistachios help consumers practice mindful eating. “For both men and women, the tactile experience of opening pistachios has been shown to slow consumption and prevent overeating,” Setton points out.