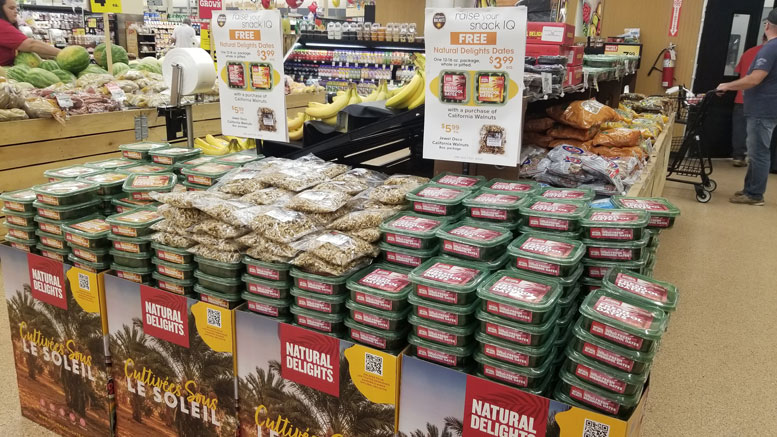 Pairing walnuts with other produce items means retailers end up getting a higher basket ring. The California Walnut Board partnered with Bard Valley Dates last summer, promoting both as an easy, portable snack.
PHOTO COURTESY CALIFORNIA WALNUT BOARD

According to the California Walnut Board (CWB), Folsom, CA, the trick to increasing year-round walnut sales in your produce department is simple: Stop thinking of them as simply an end-of-the-year, holiday baking ingredient.

Last year, the CWB’s retail programs drove sales and consumption during time periods when walnuts are not typically a priority for consumers. For example, during American Heart Month in February 2021, the CWB worked with retailers on a campaign to display walnuts with messaging about their heart-health benefits. With 34 participating retailers, operating 10,400 locations, retailers saw an average sales lift of 22.5%.

Then, in May through August 2021, a summer CWB snacking campaign signed on 26 retailers with 7,400 locations to execute in-store promotions and specials. The first-of-its-kind snacking-focused program encouraged retailers to think of new ways to promote walnuts. Retail elements were supported with consumer outreach, and the campaign drove year-over-year walnut sales increases.

And don’t forget fall. Jennifer Olmstead, senior director of U.S. marketing and communications for the board, urges retailers to think about starting the holiday season earlier, by connecting walnuts to all the fall trends. “You can actually get people to start thinking about buying walnuts earlier,” she says. “You can talk about the walnut harvest, which happens in October, and they pair with a lot of fall flavors, like apples or pumpkin. There are lots of opportunities to start the holiday season earlier and then get people coming back to buy that second or third bag later in the season.”

Walnuts are available as in-shell products, or shelled products that include halves, combo halves and pieces and various sizes of pieces. A little more than half of walnuts are sold as shelled. To get consumers’ attention, retailers should consider pitching walnuts as an easy, healthy snack option, and a nutritious plant-based food.

A handful of walnuts (approximately 28g) has 2.5 grams of plant-based omega-3 alpha-linolenic acid, or ALA, 4g protein, and 2g of fiber. Among tree nuts and peanuts, walnuts have the greatest amount of polyphenols, a type of antioxidant, and they help maintain healthy cholesterol levels and decrease blood pressure.

Walnuts serve as a plant source of protein, and make plant-based dishes more satisfying. After all, they do call it “walnut meat.”

If a retailer has a retail dietitian program, the dietitian can really play up the health benefits of walnuts, Olmstead says, and give shoppers a good-for-you reason why they should buy walnuts.

The walnut board recommends retailers use off-shelf displays to gain shoppers’ attention and encourage unplanned purchases. The majority of walnut sales are planned, yet shoppers are willing to buy walnuts on impulse when given the opportunity to do so.

“It’s about that recipe inspiration at the point of sale, or getting people to think outside of how they traditionally might use walnuts,” Olmstead says.

She adds cross-merchandising walnuts with other produce, and then providing recipe inspiration gives shoppers easy pairings to imagine as snacks, desserts, salads or other menu items.

“Merchandising two items together with in-store signage and bundled offers are some of the things that we’ve seen be extremely successful in the past,” Olmstead says. “And the other great thing about pairing walnuts with a lot of other produce items is that retailers end up getting a higher basket ring, and there’s very little shrink with walnuts.”

Retailers should use signs, posters, and display header cards to communicate the nutritional benefits of walnuts, and recipes with images can attract extra attention and stimulate sales. Previous CWB research found consumers associated certain words with walnuts, so here are some key words for those signs: natural, healthy/nutritious, fresh, high quality, and premium.

Black walnuts fill out the nut line, according to Hammons, as they have a bold, rich flavor that distinguishes them from English walnuts. Black walnuts are the most popular during the fall, but he’s seeing more retail stores putting them on the shelves year-round.

“They’re not going to be as big, in terms of volume, as other tree nuts, but they have an important niche and people will sometimes go to a particular store just to find them.”

The Most Wonderful Time Of The Year

It’s Time For Holiday Baking (And Snacking And Gifting)