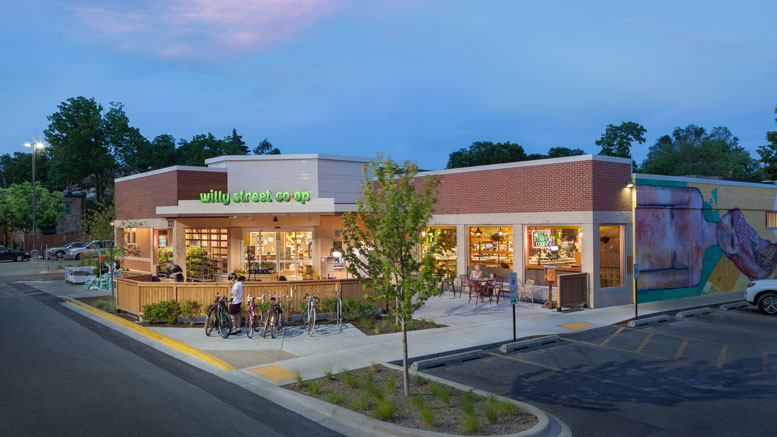 Local and organic produce are major ingredients in a Wisconsin cooperative grocery store’s recipe for success.

Since the mid-1970s, Willy Street Co-op has supported local and organic suppliers by offering its Madison, WI, customers organic and local produce. The stores pride themselves as an economically and environmentally sustainable, consumer-owned grocery business that serves the needs of its south central Wisconsin owners and employees.

Produce constitutes 19% of overall store sales. “The produce department is the number one draw for customers to come into our store,” says Megan Minnick, purchasing director. “Our organic and local product mix is unique, and we are known for our insistence on high-quality produce. You simply can’t get the same quality and selection anywhere else.”

“Willy Street is widely known for the quality of our produce, as well as the depth and breadth of our organic and local offerings,” says Minnick. “Many of our customers come to our stores primarily for the produce, and these departments serve as a draw for the rest of the store.”

Willy East, the first store, on Williamson St., is in Madison’s downtown area, a mile east of the state capitol and situated on an isthmus between Lake Mendota and Lake Morona.

The stores’ personnel pride themselves on their relationships with local growers. The strength of those relationships is especially important in the produce departments.

To keep the stores’ shelves fully stocked, Willy Street’s produce departments work directly with more than 25 small local and regional farmers, including Fazenda Boa Terra, in Spring Green, WI, and Regenerative Roots, based in Jefferson, WI. Willy Street has sourced from some of the suppliers, such as Harmony Valley Farm, in Viroqua, WI, and Tipi Produce, Evansville, WI, since the early 1980s. The farms are diversified operations that supply the stores with everything from carrots to peppers as well as eggplant, greens and root vegetables.

Top organic sellers include bananas, avocados and broccoli. Beyond those, Willy Street’s customers tend to seek seasonal organic offerings, which makes organic movement fluctuate throughout the year, says Minnick.
Two of the stores’ produce departments sell 95% certified organic produce. At the third, it’s 60% organic. The difference in proportion is a reflection of the stores’ customer preferences. “People in our community look to us for the highest quality local, organic produce in town, and we deliver,” says Minnick. Willy Street also sells Fair Trade-labeled produce.

Unlike other stores, Willy Street’s produce departments do not twin-line local and non-local items during the growing season. While selling the local lettuce, for example, Willy Street doesn’t offer California lettuce. It appears to be a winning merchandising method. “This strategy leads to vegetable sets that are up to 90% local during the height of the season,” says Minnick.
While southern Wisconsin’s local season primarily runs May through October, some local items, including mushrooms, microgreens and potatoes, are available throughout the year.

“Our shoppers prefer to buy local, and they appreciate that we are a local, cooperatively-owned grocer,” says Brendon Smith, communications director. “We work with small suppliers who don’t fit into the procurement systems established by the big chains, and our customers appreciate that.”
The Willy East store carries around 300 stock-keeping units of produce. Aside from procuring from local growers, the stores’ procurement buyers primary source from Co-op Partners Warehouse, a St. Paul, MN, distributor of certified organic produce, and United Natural Foods. Smith manages product mix, vendor relations and pricing.

Weekly promotions are the main sales driver. Sale items and new and seasonal offerings are promoted through social media as well as through sales flyers and special signage. During the local apple season, for example, each store creates a specific section for local apples which is signed. Produce workers then create individual informational cards which highlight each variety and their best use (baking, fresh eating, etc.).

The Willy Street Co-op Reader covers topics including natural and organic foods, sustainable farming, environmental and health issues and store and community events. The monthly newsletter is mailed directly to more than 35,000 co-op owners’ homes at the first of the month and picked up by more than 2,000 customers upon entering the stores.

Local isn’t an afterthought or promotional gimmick. “Our local program takes a lot of work from a planning and purchasing perspective,” explains Minnick. “Over the years, we’ve developed systems to make it manageable, but it’s a huge undertaking. It’s something that we are known for, and it draws many customers to our stores.”

“Over the years, we’ve developed systems to make [our local program] manageable, but it’s a huge undertaking.”

To ensure the stores continue fostering a healthy local food supply, Willy Street each year adds a couple of new local growers. This is particularly important as some of Willy Street’s longtime farmers age. Some examples of younger growers Willy Street deals with include Lovefood Farms, a fresh herb supplier, and Raleigh’s Hillside Farm, which grows kale.

During the last decade, the demographics of the Williamson Street neighborhood, which borders the Yahara River, have changed dramatically. The neighborhood has developed from primarily families with kids to more younger singles. Remaining relevant with the store’s customer base required the store to move toward value-added fresh-cut produce and other convenience produce offerings.

The store’s demographic shift hasn’t changed its customers’ desire for local, organic and eco-friendly offerings. “This store has done quite well with things like cardboard strawberry packaging, and it continues to do very well with local offerings, particularly harder-to-find local items like Wisconsin peaches and cherries,” says Minnick.

Willy Street’s formation was influenced by the social and cultural forces of the 1960s and 1970s, when many became interested in natural foods co-ops to obtain more control over their diets. Since then, co-op membership expanded from 4,000 owners in the late 1970s to 35,000 today. As it strengthens ties with vendors and neighborhood, community and cooperative organizations, Willy Street remains an economically viable business, notes Smith. “Thanks to many years of support from its owners, the coop is a dynamic community institution and a model of cooperative success,” he says.