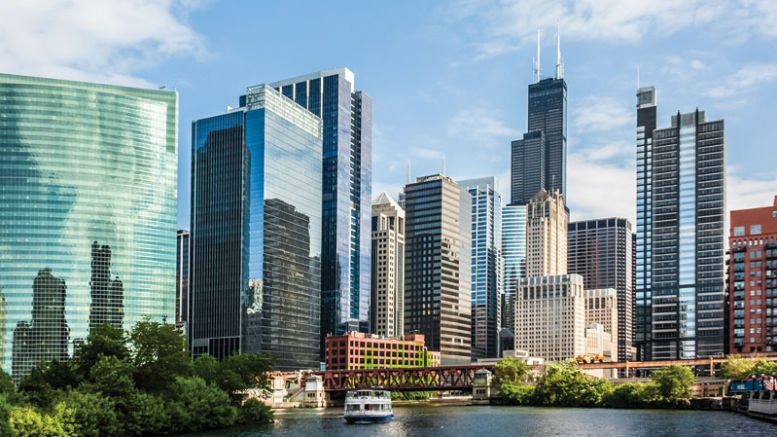 Chicago is many things. It is both cosmopolitan and working class, blue and white collar. Here you will find some of the best restaurants in the world along with the tastiest Polish sausage, Italians beef, tacos and tamales.

It’s a city of culture with museums, opera, ballet and live theater, but it’s also a town that loves its Bears, Bulls, Blackhawks, White Sox and Cubs. Chicago has every type of weather you’d care to experience — sometimes all in one day. It has a population of 3 million in the city and 7 million in the surrounding Chicagoland area. That’s a lot of people to feed, and that’s why Chicago has so many restaurants, cafeterias, taquerias, hotdog stands and grocery stores from corner bodegas, to independents, to the largest chains. These outlets rely on a steady stream of products to feed the city.

Chicago is a transportation hub for the Midwest and an important produce distribution center for the metropolitan area and the upper Midwest. The market follows the growing seasons around the country and links to supply networks in a web of transportation, cartage and logistics. The real people who work on the docks, cover the phones, buy, sell, deal with food safety issues, and tackle trends, find new ways to do all of the above — only better, faster and cheaper. 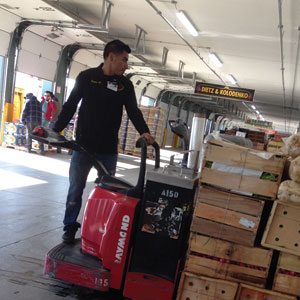 The old Water Street days are over. The pushcarts and horse-drawn carts of the last century make good black-and-white photos to hang on office walls, but the market has moved on. “If we’re not updating things, we’re not happy,” says Damon Marano at wholesaler Anthony Marano Company in Chicago outside the terminal market. Like much of the wholesale business, the Marano’s company is family run with ownership passed down from one generation to the next. It’s up to each new generation to not just learn the business but move it forward.

Terminal markets are a rarity in most American cities. Wholesalers are just as likely to exist off the market as on. In addition, wholesalers report some West Coast and Texas-based shippers setting up satellite offices in the Chicagoland area — in these cases, effectively eliminating the middlemen. This is a fact that Adolfo Vega, president of La Hacienda Brands, Inc. can personally attest to. “It’s gotten worse,” says Vega. “Many [shippers] are now setting up shop here in Chicago and going direct to the stores.”

That move prompted La Hacienda to find its own shippers to compete in both quality and price. According to his sister and general manager, Rocio Vega, this has inspired the company to create new product lines. “Right now, we’re promoting our in-house cheese, which has been doing very well. We received a good response from our customers. We’re selling it here in the Chicago area as well as Wisconsin and Indiana.”

“We pride ourselves on the fact that we do a lot of specialty packages. We were one of the first to introduce 24-ounce, petite-sized potatoes.”

This family-run wholesaler has operated across five decades. “My grandfather started the company in 1973,” says Rocio. “My dad took over in 1993, and now my brother and I are here.” La Hacienda is a one-stop, pickup service supplying foodservice and retailers throughout the area and locally to stores such as Cermak Fresh Market and Pete’s Fresh Market.

The third generation of the Marano family has been making investments in both their staff and the infrastructure of the facility. “We’ve been spending a lot of time educating and bringing up the next generation of produce salespeople and trying to find the 30- to 35-year-olds who are willing to make a career out of this,” says Marano. 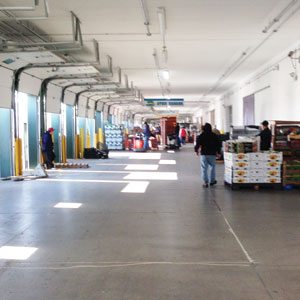 The Anthony Marano facility covers more than 10 acres just a stone’s throw from the terminal market. It houses seven separate departments dedicated to different commodities and provides repacking, delivery and ripening services as well as marketing and support for foodservice both on and off-site.

As for future innovations and development, Marano is keeping his cards close to the chest for now. An increase in the Marano fleet is in the works, however. “We are reinvesting in our fleet and updating to about 40 new trailers. We have nine tractors on order this year, and we ordered 16 last year.”

is a wholesaler located on the city’s south side. The company mostly services retail but also some cooperatives throughout the Midwest. “It’s a mix of both,” says Ed Romanelli, vice president of sales for the company. “When you look at co-ops, the product that we ship to those guys does go into mostly independent retailers, but we do a lot with the large chains in the Midwest, the Chicagoland area, the Indianapolis area, and into Iowa as well as Pennsylvania.”

Agrow sources its products from North Dakota, Minnesota and Wisconsin, but follows the seasons to Florida, California and Arizona. “We try to source the freshest product available,” says Romanelli. “Ninety-seven to 98 percent of the stuff we deliver gets there next day.”

One change Romanelli has seen in the market in recent years is retailer preference for private labels. “There’s more private label product than in the past. The retailers are putting their names out there, and if they do a good job at it, the customers gravitate toward it.”

Another trend is a preference for smaller sized bags. “We pride ourselves on the fact that we do a lot of specialty packages,” says Romanelli. “We were one of the first to introduce 24-ounce, petite-sized potatoes.” 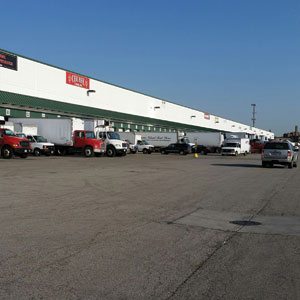 “We buy produce from all the growing areas and sell all over the country,” says Sarah Miller, chief operations officer of Muller Trading Company, Inc., which employs 17 brokers working out of a state-of-the-art facility in the North Chicago suburb of Libertyville.

Muller supplies retail and foodservice with fruits, vegetables and fresh-cut products. “We sell a lot of watermelon in the summer along with steady business in all other commodities such as tomatoes, peppers, avocados.”

One of the challenges Muller Trading faces is sourcing enough product to meet customer demand. “We are currently adding staff to meet those demands,” says Miller. To further aid in that process and to streamline operations, “we created our own home grown software program and have it up and running to help better service our customers.”

If you’re not careful on the docks of the Chicago International Produce Market (CIPM) you could get run over by one of the dozens of pallet trucks that zip back and forth from wholesaler to truck and back again. It takes mere seconds for these guys to position the forks of their trucks under a pallet stacked high with spinach, bananas or ice-covered broccoli. They can sense when another truck is approaching and react immediately. Their horns help alert other drivers and truck loaders to moving targets. The horns sound so frequently as if to create the song of the market. 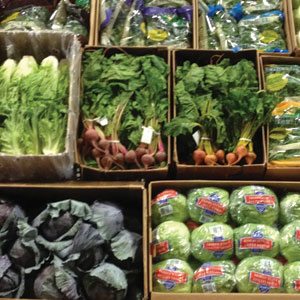 The CIPM is more than 450,000 square feet of state-of-the-art storage facility on the city’s south side. While terminal markets are disappearing throughout the U.S., this market sees plenty of action on nearly 100 loading docks. Recent improvements to the building include the addition of doors to all stalls. This helps keep frigid temperatures from damaging commodities. Protecting the cold chain against freezing paid dividends with better produce, happier customers and employees. “The doors got done a year ago for the winter,” explains Rob Strube, the president of Strube Celery and Vegetable Company. “We didn’t have the worst winter, but it did help because we had no snow this year, and there was a big difference going up and down the docks.”

It was Rob’s uncle Tim Fleming Sr., who spearheaded the move of the market from South Water Street to its current location. Future projects for the facility are mainly general maintenance, as Strube explains, “We had a few years where we kind of left the building alone, and it’s creeping back up on us, we have to fix a few things here and there.”

Strube offers a full product line from apples to zucchini and is also supplying an increasing number of produce to the growing Hispanic market. The company will be adding a salesperson soon to handle these accounts. “It’s a matter of having the quality, the right price and good service,” says Strube.

Strube sources throughout the United States and Mexico and distributes roughly 100 miles around Chicago, north to Milwaukee, and around the southern tip of Lake Michigan into Indiana, and up into the state of Michigan. While its current delivery capacity is limited, one of Strube’s biggest customers drives from Ohio to pick up. “That’s one of things we’re working on. We have some opportunities for growth moving away from the city.”

Strube also brought in two new salespeople with Tony Battista working the vegetable department and Breck Grigas bringing in tropical, which will focus more on the mangos, papayas and avocado deal. Panama Banana is another wholesaler with a long history in Chicago. “We’re a full-line fruit house,” says Tom Durante, salesman and produce buyer for Panama Banana.

For more than 80 years, Panama Banana has been serving the Chicagoland area as well as Southeastern Wisconsin and Northwest Indiana. Despite the name, the company does more than just tropicals, sourcing peaches from Florida, nectarines from California and plums from South America.

“Our bread and butter is still the local chains,” says Durante. This includes Cermak Fresh Market and Pete’s Fresh Market, but Panama also works with Jewel Osco and Roundy’s and supplies several hispanic markets with produce on a daily basis. Durante hasn’t seen much change in the business as far as selling, but on the flipside he says, “the buying end has changed considerably. Shippers consolidated to the point where pricing is fairly consistent across the board. It’s hard to find deals like we used to. There’s not as many consignments from the shipper.” 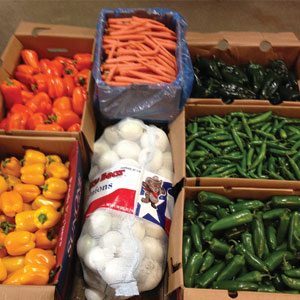 “Everyone is concerned right now about food safety,” says Greg Mandolini, president of fresh fruit house, Mandolini Company. Mandolini has taken steps to satisfy customers’ concerns. “We’re maintaining our cold chain better,” he says, “and everyone right now is taking extra care that when you’re hiring a truck you have all the right documentation, and they’re not mixing the produce with any food product that might be a detriment to the produce.”

It is also the responsibility of wholesalers to ensure shippers are performing their due diligence with sanitation. Mandolini is focusing on using clean pallets instead of exchanging old ones. “We’re buying brand new pallets for every commodity that we take in, so there’s nothing that is going to be transmitted to the produce that may harm someone down the road.”

There have been other changes to address specifically food safety issues and to streamline operation in general. Mandolini notes, “Our computers are updated, our facility is where we want it to be in terms of having the ability to receive and ship. We upgraded the phone system last year. We closed our docks, which made it a lot more user-friendly for our customers and employees and protects the product better.”

Beside food safety concerns, competition from brokers is always a challenge. According to Nick Doumouras, president of Olympic Wholesale Produce, “There’s more competition on the retail end, so sales are good, but the profits keep getting smaller and smaller.” Competition is nothing new to the market. It’s just another challenge that must be met. “I’m looking to add a couple more salespeople to focus on the Asian and Hispanic markets,” says Doumouras, which will help Olympic sell to the city’s many ethnic retail outlets.

Outreach to the Community