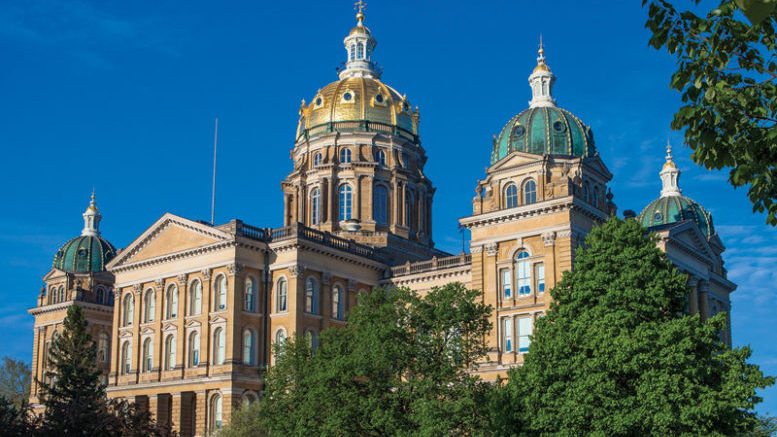 Those who haven’t been to Des Moines — which is Iowa’s most populated city, according to the 2010 U.S. Census Bureau — are missing the resurgence of a gem in the Midwest. 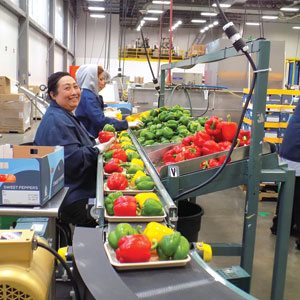 Its population of 569,633, which experienced growth in four out of five counties between 2002 and 2015, gives it an urban feel with a small town atmosphere.

Although the city is known for insurance, government, manufacturing, trade, and health care services in terms of its businesses, the major agricultural crop here is corn.

“Des Moines does not have a terminal market, which is common in the larger cities on the coasts,” says Brendan Comito, chief operations officer at Capital City Fruit. “All of the produce companies in the Des Moines area operate out of their own, stand-alone facilities.”

Produce is a key component in this city, as is evident by its popular Des Moines Downtown Farmers Market. Opened in 1976, the market spans nine city blocks in Des Moines’ downtown and includes approximately 300 vendors that rotate in and out throughout the season, according to Kelly Foss, director of the farmer’s market.

Open Saturdays from the beginning of May until the end of October, Foss says the market is attended by 25,000 visitors each week. Fifty-eight of the state’s 59 counties are represented here. There also is a small percentage of resellers who are marketing locally grown fruits and vegetables, as well as fruit and vegetables that are not grown in the state.

“Any Saturday will find more than 200 farmers, cheesemakers, flower growers, vineyards and other food producers from around the state displaying their goods at the market,” says Foss. It’s not just consumers that are buying these fruits and vegetables. “We have area chefs who shop at the market, connect with specific vendors and come early to fill wagons and carts with produce for their restaurants.”

“Our residents value a good farm-to-table experience, like most people today, who like to know where their food is coming from,” says Foss. “People value farm fresh food, and more questions are being asked about origin and growing areas.”

The city has benefitted from its rising status in the financial world, as well. The economy of Des Moines is consistently rated in the Top 5 in the U.S. and has been No. 1 on many rankings out of every U.S. city. This is due to a highly educated population with disposable income.

“This demographic wants the freshest produce possible and is open to trying new things thanks to a thriving independent restaurant scene with creative chefs pushing the boundaries,” says Comito. “It is no longer a meat and potatoes community.”

Another major change in the past 30 years has been the arrival of immigrants and refugees from other countries.

“This diversity is reflected in the food choices, as immigrants seek fresh fruits and vegetables they were accustomed to eating in their hometowns overseas,” says Comito. “Many started their own restaurants and others are natural entrepreneurs, as they are not afraid of risk. Some of those entrepreneurs are now customers of ours, buying a diverse array of fresh produce.”

Produce wholesalers have a long history of doing business in Des Moines, and in more recent years, like in the rest of the country, they benefitted from consumers’ increasing interest in eating fresh fruits and vegetables.

Capital City Fruit is a third-generation family business based in the Des Moines suburb of Norwalk. The company was founded in 1949 by Joseph T. Comito and began as a fruit market. It began produce brokerage operations in the 1960s and started repacking and distributing in the late 1970s, when Joseph T.’s son, Joseph M., took over the business. In the mid-2000s, Brendan, Kieran and Christian Comito assumed ownership of Capital City.

Currently, the company employs 150 team members and operates out of an 83,000-square-foot facility constructed in 2012. The company focuses on supply chain management for its retail and foodservice customers and delivers fresh fruits and vegetables to Iowa, Missouri, Kansas, Nebraska, Minnesota, Wisconsin and Illinois.

“The economy in Des Moines is consistently rated by national publications among the very best in the entire United States,” says Comito. “Since we don’t have mountains and oceans, the biking and running communities are very active, and those recreational events attract thousands of participants, who are fueled by fresh produce.”

One of the biggest challenges businesses are experiencing is that the thriving city is a victim of its own success.

“Because the economy is so strong, businesses are struggling to find the employees they need to grow,” says Comito. “Every business owner I speak to says their No. 1 issue is finding qualified employees.”

This factor has driven up labor costs and put companies like Capital Fruit at a competitive disadvantage. To compensate, the wholesaler has had to focus on execution.

Another challenge is population. The Des Moines area is only 500,000, and the state of Iowa has only 3 million people.

“As a result, we have to be much more on our game than produce companies located in highly populated areas,” says Comito. “In some ways, that makes us more innovative and better at serving the customer than produce companies in bigger cities that can rely on huge populations for their sales and are not challenged on a consistent basis.”

“Since we don’t have mountains and oceans, the biking and running communities are very active, and those recreational events attract thousands of participants, who are fueled by fresh produce.”

Capital City Fruit has been working with local formers for decades, but has benefited the most in the past five to 10 years. This includes qualifying growers, planning their planting schedules to meet volumes and handling the logistics of getting product from the farms to customers.

“The demand for locally grown produce is growing by double digits each year, and we work with more than 30 growers in our seven-state delivery area to meet that demand,” says Comito. “The local produce starts in May, but really does not hit heavy volume until mid-June and it continues right up until the first hard freeze.”

Another thriving wholesaler in the city is Loffredo Fresh Produce, which built a new fresh-cut facility, Produce Innovations, 4 miles from its main warehouse in November 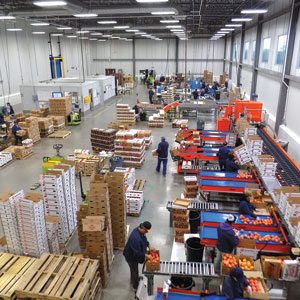 “This [venture] impacted us greatly, as we’ve been able to stretch out and not only do our own local business, but open our doors to co-packers and expand our reach into c-stores like Kwik Trip and Casey’s General Stores,” says Gene Loffredo, president and chief executive of Loffredo Fresh Produce. “Our business has grown in Des Moines as the city is growing and picking up population.”

The city’s accolades haven’t hurt, with West Des Moines named the fifth most desirable place to retire in a recent report by Bankrate.com. Not only is the cost of living affordable, but the city has a concentrated number of insurance companies, medical facilities and banks to support retirees.

But not many have the history of Loffredo Fresh Produce in the city, which has been in business for 125 years.

“Being located in the middle of the country, we do business within 500 miles of our warehouses,” says Loffredo. “Our business continues to grow, and we’re working harder, particularly in the Madison, WI, and Kansas City markets, with business up about 5 percent this year.”

Its offshoot, Produce Innovations, also is growing. The firm just hired more than 100 employees, and at press time, was expecting a strong summer business.

Adam Babcock, director of operations for Produce Innovations says being centrally located with a demographic of largely young, urban professionals and people looking to eat healthier has kept business booming.

“Our biggest challenges have been procuring fruits and vegetables from California, Texas and Mexico, since it’s quite a ride up here,” he says. “Although we’re centrally located, there are logistical challenges getting produce here that is reasonably priced and in good shape.”

The company’s selling region covers the majority of the Midwest states, from Madison, WI, to St. Louis, MO, to Dallas, TX, to western Kansas and Lincoln, NE.

Repacker/processor Chandler Metelman, Inc., which also has operated Summertime Potato since the early 1970s, is seeing more interest in local or Midwestern produce, especially with potatoes in the foodservice industry.

“Restaurants in the Northeast are buying potatoes from the middle of the country rather than Idaho to keep it more local,” says Ron Peterson, Chandler Metelman’s president.

What many are not aware of is that potatoes are the second most popular produce item grown in Iowa.

Chandler Metelman benefits from doing business with two major retail chains that are located within 45 minutes of its facility, which covers about a dozen states.

“The biggest disadvantage we face is that we’re not yet a produce mega-house like the East or West Coast, where there’s a lot of produce being grown,” says Peterson.

What Iowa has going for it is the potential for more greenhouses, which many predict will be the next aspect of growth for the region’s produce supply.

In the meantime, Chandler Metelman continues ramping up its marketing and relationships, building its onion business and looking into sweet potatoes for future growth.

“One of the values we bring to customers is we pack to order, so we don’t pack anything until we have the order,” says Peterson. “It’s nothing for us to get an order in on Tuesday afternoon for Wednesday, and we grade everything twice.”

Like other businesses in the city, Des Moines Truck Brokers is experiencing growth. The 47-year-old company is in the hiring process to accommodate this growth spurt.

The traditional truck broker was founded by James DeMatteis Sr., to handle Capital City Fruit’s shipping needs and has operated within the same building as the wholesaler, even as its business and client base have expanded.

“We’ve taken our services to other places, and now Capital City is a fraction of our business,” says James DeMatteis Jr., Des Moines Truck Brokers’ president and chief executive. “Although produce is still king with us, we hang our hat on perishable goods and moving refrigerated products.”

The company has benefited from Iowa’s central location and major corridors of I80 and I35, which stretch from Texas through Minnesota. “With these two thoroughfares, we can touch a lot of major markets both in shipping and on the user side,” says DeMatteis. “Yet, Des Moines is a small enough market that we know all the major players and tend to work well together to improve the industry.”

As a produce transporter, Des Moines Truck Brokers’ biggest challenge is educating the buyers/shippers of these products about the newest regulations that impact
business. Because the motor-carrier industry is heavily burdened with regulations in safety, it led to changes that impact timing.

‘Food Is Everything’ In Montreal