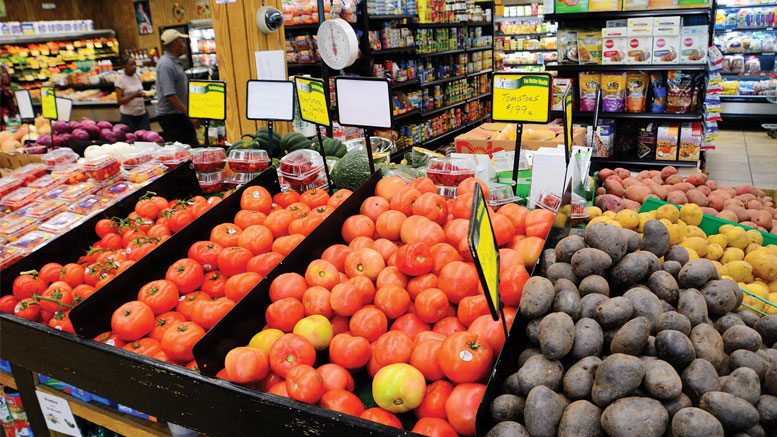 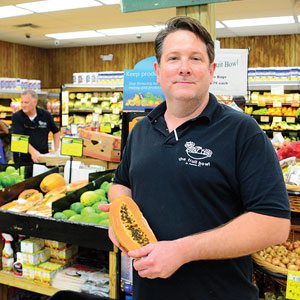 High-quality produce might seem like a no-brainer in a supermarket located in a tropical island paradise. Not so in the U.S. Virgin Islands where more than 95 percent of all food, including produce, is imported. What’s more, most of this food, including fresh fruits and vegetables, travels four days by sea before reaching this U.S. territory located 1,100 miles southeast of Miami.

It’s no wonder that when Marty Goldberg, a New York City go-getter with an MBA who never worked in the produce industry, teamed up with a friend to ship a container of top-notch produce to St. Croix in the 1970s it sold like hotcakes. Most importantly, this successful test of the island market’s waters for superior produce sowed the the seed for what is now the second-generation family-owned and -operated supermarket on the neighboring island of St. Thomas called The Fruit Bowl.

“My father and mother honeymooned on St. Thomas and were blown away by the beauty. So, after seeing the sales success of the produce on St. Croix, Marty decided to move the family to St. Thomas, open his own store, and set out to learn the produce business with the guiding principal of offering high quality at a fair price,” said David Goldberg, Marty’s son and the store’s manager.

In 1973, the elder Goldberg opened his first store, named Top Banana, in a mid-island residential area. One of his first suppliers was 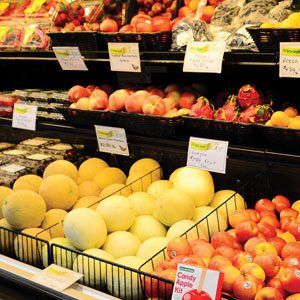 Harry Krupnick, at Amigo Foods, which was then located on the Hunts Point Produce Market, in New York City.

In 1975, Goldberg opened at his present location, near the territory’s capitol of Charlotte Amalie. The two big supermarkets at the time were Grand Union, located directly across the street from the small complex in which The Fruit Bowl is located, and Pueblo, less than half-mile down the street.

The business strategy of high-quality perishables proved a key differentiator. In fact, The Fruit Bowl was the first to offer fresh milk imported from Florida rather than the re-constituted milk made on-island from powder shipped in from Ireland.

Today, The Fruit Bowl still occupies its spot in the Wheatley Shopping Plaza. However, instead of one bay, the Goldbergs increased its size to four bays through successive remodels that enabled the market to offer a greater volume and variety of fresh produce and other perishables to its customers.

The Fruit Bowl occupies a total of 6,000-square-feet, with 4,000-square-feet of retail area (produce occupies 45 to 50 percent) and the remainder in cold storage. There are two walk-in coolers, one set at 58-degrees Fahrenheit for items such as tomatoes and the other set at 36-degrees for other fruits.

“We are very particular about maintaining the cold chain. The refrigerated trailers from the docks drive right up to our back door where everything is offloaded quickly and efficiently. In fact, we’ll often go into the trailer and grab items out of order like mushrooms or okra to ensure they get right into our coolers at the correct temperature,” explains Goldberg. 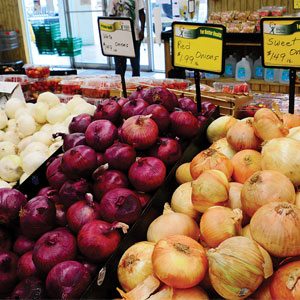 Goldberg and James Clark, a Kentucky native who has worked at The Fruit Bowl since 1982, order the bulk of the store’s produce. This supply comes through Global Perishable Services, a Doral, FL-headquartered company opened in 2011 by Doug Tannehill, a 20-year veteran of C.H. Robinson Worldwide and now GPS’s president.

GPS buys and consolidates perishables product for customers in the Caribbean, Central and South America. Orders are placed 1.5 to 2 weeks in advance to allow time for sourcing, transporting cross-country or out-of-country, and loading prior to the nearly week-long sail south on commercial carriers such as Tropical Shipping, headquartered in Riviera Beach, FL.

The remainder of the average 200 produce SKUs, which adds up to nearly 1,000 SKUs counting all produce carried throughout the year — including specialties, such as dragon fruit and fresh turmeric — arrive from a few sources.

First, items such as green-skinned avocados, mangos, calabaza, breadfruit, dasheen and cassava arrive weekly via a farmer in Dominica who flies the produce in himself or by boat from the neighboring island of Puerto Rico. These tropicals are especially popular with the store’s core customer of island residents.

Second, during high season from December through May when the island is at its peak population, The Fruit Bowl will fly in specialty and highly perishable produce such as organics and microgreens for the chefs who work on the dozens of mega yachts docked at the marina down the street.

In 2009, The Fruit Bowl was named as one of the top six places in the world to provision for fruits and vegetables by super yacht publication, Dock Walk.

Third, Virgin Islands’ farmers will supply produce such as Scotch bonnet peppers, herbs (such as basil), tomatoes and greens (such as collards and kale), when available. There has been a resurgence in agriculture in the Virgin Islands fostered through the global interest in locally grown along with support from the territory’s Department of Agriculture.

The most popular feature at The Fruit Bowl is the salad bar, which was added after the most recent store expansion in 2007. The 6-foot salad bar serves more than a dozen fresh produce selections, in addition to prepared salads as well as cubed cheeses, assorted olives and cut fruit. Two full-time employees keep the bar stocked, cleaned and serviced.

Customers can find daily menu changes based on what’s available in-store. For example, a variety of mushrooms, stuffed grape leaves and roasted red peppers was available during a recent visit in September. Two additional feet of space on the bar holds three 5-quart kettles of hot soup. The salad bar is so popular that a hot bar is now in the works.

Also new to The Fruit Bowl is the use of social media to let customer’s know what is in-store. For example, the store’s Facebook page lists the daily soup selections and weekly price promotions.

Traditional advertising efforts are used too. The store runs an ad each week in the island’s only print newspaper and airs a commercial on local TV. However, unlike any other supermarket on St. Thomas, The Fruit Bowl periodically posts newspaper, magazine and Internet clippings on its front glass doors informing customers about everything from the latest produce nutrition facts to information about a weather event on the U.S. mainland that will temporarily affect the price of produce.

Beyond fresh produce, The Fruit Bowl is known for its other perishables such as a wide-range of cheeses and dairy products, never-frozen prime meats, antibiotic- and hormone-free chicken and pork, as well as fresh fish flown in during season three times per week.

The Fruit Bowl celebrated 40 years in business last year. The market, has definitely become an integral part of the community on this 13- by 4-mile island with a population of 60,000. One of the most well-known ways is through its almost three-decade sponsorship of the Women’s Jogger Jam, a 2-mile fun run that attracts more than 300 women, from tots in strollers to seniors, and benefits the Family Resource Center. The Fruit Bowl provides everything from T-shirts to cut fruit and vegetable snacks. The market makes countless other community contributions annually — including fruit and vegetable gift baskets for events such as Nurse’s Week.

“People want good quality. This, and offering more unique items is what sets us apart from the competition and what keeps our customers coming back,” says Goldberg.