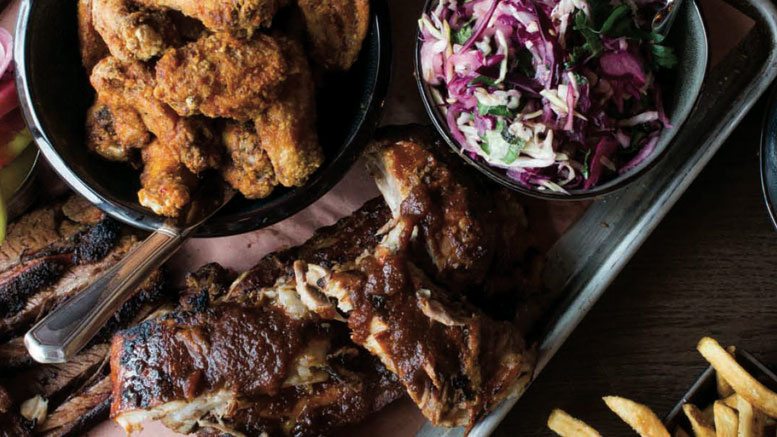 Trendy brew pub elevates bar cusines through inventive produce use and its focus on fresh.

“We serve good, cooked-from-scratch food using as many local or Canadian ingredients as possible,” says Lister, who was born and raised in the small seaside town of Weymouth, England. “We cook foods influenced by many countries and cuisines, including Canada, Britain, India, America and France. We have cooks from all around the world who I encourage to contribute ideas to our menus.”

The restaurant is inspired by the history of Toronto’s Liberty Village neighborhood and aims to encourage diners to come together over quality food and craft beer. It seats 150 in the main dining area and has two additional private rooms. Its patio seats 70, but is in the process of expansion to 130 seats. Set in a two-level heritage space, Liberty Commons restaurant occupies the entire lower level, with the main level housing Big Rock Brewery’s beer shop and taproom.

Though the demographic tends to skew toward younger Millennial types from the surrounding condos, Lister says restaurant customers are a real mix. “We’re packed during lunchtime and see a lot of local business people,” he says. “We attract a good sports-watching crowd, brunch dwellers and lots of larger groups from ball teams to office parties.”

Bringing Farm To The Pub

Liberty Commons seeks to break the stereotype of common pub food by incorporating significant and unique produce in its menu. The restaurant spends between $1,000 and $2,500 per week on produce purchases.

Lister sources from local suppliers and wholesalers, including Toronto-based Crisp Fine Foods, as well as independent farmers, to ensure a consistent, fresh, quality produce offering for his cuisine. “I always try to look for what is in season,” he says. “We are a pub, so there are some ingredients we cannot source locally that we still need on our menus, such as tomatoes or avocados.”

Sourcing for Lister is all about quality and freshness, but he’s not afraid to receive product in “just-picked” condition. “The quality coming has to be well packed and undamaged,” he says. “However, if our vegetables turn up with dirt on them, it’s no problem. It’s worth the effort to scrub and rinse our produce clean to get those authentic fresh flavors.”

The restaurant strongly supports local farms when in season. “One of the most treasured companies we work with at the moment is 100km Foods Inc.,” says Lister. “They source within 100 kilometers of the greater Toronto area. The produce from farms affiliated with 100km Foods is always in season and delicious.”

Lister aims for close to 50 percent of the menu to incorporate produce. The menu changes between four to five times per year. “We also constantly run daily specials with seasonal produce highlighted,” he says.

Though much of the menu is meat-heavy, Lister confesses to not being a huge meat-eater. “I love fruit and vegetables,” he says. “I often tell cooks I could live vegetarian — with the occasional bacon slip-up. I grew up without an abundance of meat or fish on the table and always ate lots of root veggies. As I’ve aged, I’ve begun to appreciate fruit and veggies.”