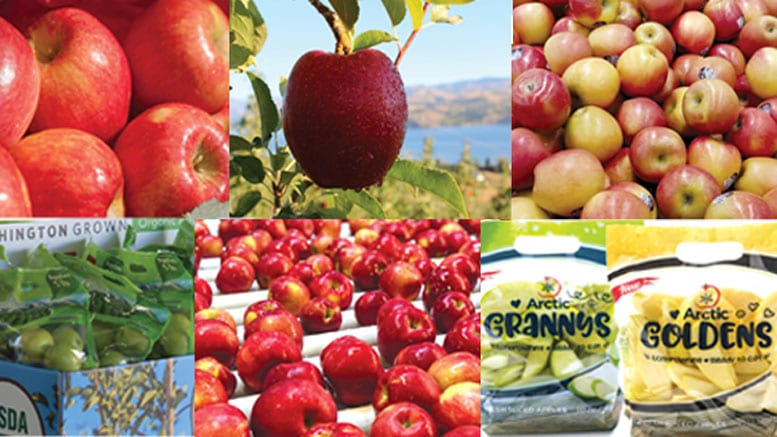 The category is booming in the Evergreen State, led by cultivation of its own varieties as well as those bred elsewhere.

The state of Washington is an apple growing powerhouse. Specifically, out of 32 U.S. states that grow apples commercially, Washington supplied more than 60 percent in 2018, according to data from the Falls Church, VA-headquartered U.S. Apple Association (USApple). What’s more, the Evergreen State’s 2018 production was below its five-year average. Not this year. Washington’s fresh market apple crop is expected to be 18 percent larger, at 137.3 million 40-pound boxes. That’s a lot of apples.

“Apples are one of the top-selling produce categories for our stores, especially in the fall when the percent of total department sales can be as high as 10 to 12 percent,” says Jason Kazmirski, director of produce and floral merchandising for the 70 independent grocers that are part of Tukwila, WA-based Northwest Grocers, which operates under banners such as Thriftway, Payless Foods, Red Apple Markets and IGA Markets. “Also, apple growing in the state is in the Eastern part, rather than all over the state, and seasonal. This means shoppers look to supermarkets to supply the majority of their needs.”

The eastern slope of the Cascade Mountains in Washington State is an ideal place to grow apples, according to Mike Preacher, director of marketing for Domex Superfresh Growers, in Yakima, WA. “We are fortunate to have fertile, volcanic loam soil, warm sunny days and cool nights. Cold winters provide an important latency period for trees. Robust irrigation systems capture Cascade Mountains snowmelt and allow us to apply water to trees where and when we need it, enabling the natural defense our arid climate provides against pests and diseases. Combine all of this with nearby world-class agricultural research programs, and Washington State is a natural location for variety development.”

Washington, with its orchards once dominated by Red Delicious, is today a hotbed of cultivation for varieties bred elsewhere and for in-state varietal development.

“Until we started the Washington State University (WSU) program in 1994, there were no varieties that were bred and selected in Washington, so apples from other programs and nurseries obviously have done pretty well here,” says Kate Evans, pome fruit breeder and professor at WSU’s Tree Fruit Research and Extension Center in Wenatchee, WA. “However, there are some that have challenges in our climate. For example, Honeycrisp appears to be more challenging to grow in Washington than in Minnesota, where it was bred, and Jazz struggles with fruit size in Washington. That said, it’s logical that apples bred and selected for our climate will be even more successful.”

What do consumers want and breeders look for in new varieties?

“It used to be just the crunch. That was No. 1,” says Andy Tudor, vice president of business development for the Rainier Fruit Company, in Selah, WA. “Now, we have this with so many varieties that the goal is flavor. A new apple needs to have a niche flavor.”

The apple also must be eye-catching on store shelves, adds Chuck Sinks, president, sales and marketing for Sage Fruit Company in Yakima, WA. “A bright-colored piece of fruit tends to do that over a less-colorful apple.”

WHAT’S HOT, WHAT’S NOT
There are a dozen varieties of Washington apples on the shelf year-round, with 18 or more in the fall, according to Terry Esteve, produce director at Robért Fresh Market, a six-store chain based in New Orleans. “We carry all the standards like Galas, Fujis, Golds and Grannys, as well as the newer ones likes Honeycrisp, Pink Lady and Pacific Rose.”

Gala, at a projected 23 percent of the crop, will be the largest-volume apple variety, according to an early crop forecast by the Washington State Tree Fruit Association, in Yakima, WA. Red Delicious is second (20%), Fuji third (13%), Granny Smith (12%) and Honeycrisp (12%). Organic apple production is estimated at 13% of the crop total.

Newer varieties of branded apples such as the Koru, Jazz, Envy, SweeTango, Kiku and Pacific Rose, are also in a growth phase, say growers.

Older varieties becoming less prevalent include Jonagold, Braeburn and Cameo, according to Sage Fruit Company’s Sinks. “In addition to these varieties, while we’ll continue to grow Red Delicious and Golden Delicious, they are also becoming less popular among American consumers.”

WHAT’S HOT
ARCTIC. Bio-engineered to be non-browning by Summerland, BC-headquartered Okanagan Specialty Fruits, Inc., these apples have a 28-day shelf life once sliced and are a boon to fresh-cut retail and foodservice sales. Okanagan’s current 1,235 acres of trees are all located in Washington State, with 2,000 acres anticipated by the end of 2020. The first, Arctic Goldens, were commercially introduced into test markets in 2017 followed by Arctic Grannys. Arctic Goldens harvest in late September early October, and are crisp, juicy and sweet. Arctic Grannys, more tart in flavor, harvest a few weeks later. Arctic Fujis are already planted, with Arctic Galas next. The company expects to have 8.5 million pounds of Arctic apples for the 2019-2020 season, with annual increases to eventually provide year-round availability. Neal Carter, president, says, “We have an array of infographics, prepared social media posts, recipe cards and videos, and much more at the ready to assist interested retailers.”

AUTUMN GLORY. This Fuji-Golden Delicious cross grown and marketed in North America exclusively by Domex Superfresh Growers, is in its third season of commercial promotion, with 1 million case quantities anticipated in the next few years. Standout features, says Preacher, “are a very sweet, firm flesh with hints of cinnamon and subtle notes of caramel. The golden background and blush foreground helps it stand out against other bi-color apples on the shelf. The crop harvests in October, with the first shipments the third week of this month. The company supports promotion of the apple with marketing tools designed to drive introduction and trial such as store displays, digital coupons, social media support and sampling.

BREEZE. Crisp texture, intense flavor, a white flesh slow to oxidize and pink-red blush over a yellow background are distinguishing characteristics of this chance seedling discovered nearly 20 years ago in New Zealand. First planted in Washington State in 2015 with its first commercial harvest in 2017, the Sage Fruit Company is the exclusive supplier thanks to a partnership with The Fresh Fruit Company (Freshco) of New Zealand. The apple harvests in early to mid-August. Availability of the Washington crop is August through January, with offshore availability from April through July. Sage Fruit can provide retailers with in-store, Breeze-specific display bins.

CHEEKIE. Like Breeze, this is a New Zealand variety from Freshco, and Sage Fruit is the exclusive U.S. supplier. The apple is crisp, juicy with a dark red blush, and has a slightly tropical, slightly tart flavor. “We currently have test blocks in the U.S. and look to have commercial volume availability within the next 4 to 5 years,” says Sinks.

COSMIC CRISP. Developed at WSU, where it was first known as WA 38, this Honeycrisp-Enterprise cross has had unprecedented uptake with approximately 11 million trees planted in the state since 2017, according to Evans. The apple’s flesh is extremely crunchy with a sweet-tart flavor. Its peel features tiny yellow starbursts over a red background. Industrywide release is set for December 2019. The initial commercial crop will have limited availability. However, volumes should grow exponentially in the next 5 to 10 years.

JUICI. This Braeburn/Honeycrisp mix, which has the taste and consistency of a Honeycrisp and is currently only grown in Washington State, was first marketed three years ago. Harvest starts in late October with storage availability expected until March. “We are getting our first crop of organic Juici this year, but it will be very small until more blocks transition over in the next two to three years,” says Brent Shammo, in marketing at Starr Ranch Growers, Wenatchee, WA.

LUCY. Cultivated by a small group of Central Washington growers, these apples offers unique attributes. Lucy Apples are part Honeycrisp — Lucy Rose has a red skin and berry sweet-tasting flesh, and Lucy Glo is yellow-skinned with a blush red interior that’s tangy sweet in flavor. These apples, which reached test-market volume last year, are grown and marketed by Chelan Fresh, in Chelan, WA, and Stemilt Growers Inc., in Wenatchee, WA.

RAVE. This University of Minnesota-bred cross between a Honeycrisp and MonArk, a variety from Arkansas, started its third year of commercial harvest in July or three weeks before Honeycrisp comes to market. In 2018, volumes were approximately 60,000 40-pound cartons, according to Roger Pepperl, marketing director for Stemilt Growers, the exclusive North American grower and marketer of this variety. Rave is part of Stemilt’s Inspiration Orchard portfolio, which also include SweeTango and Piñata. “It has a Honeycrisp’s fracture, it’s intensely colored, is really juicy, and the tree produces a bell-shaped curve of sizes peaking on 80s,” says Pepperl. The company promoted the apple via its month-long Rave Apple Road Trip Celebration, which featured a food truck journey from Minnesota to some of the U.S.’s largest East Coast cities and its retailers.

SMITTEN. Four parental varieties – Fiesta, Gala, Braeburn and Falstaff — create this striped apple, known for its bright pink/red over a yellow background, with a sweet mildly tart taste. Both conventional and organically grown fruit are available, as are point-of-purchase bins for each. “Last season, we ran a social media sweepstakes through our website. The winner was awarded a gift card and a sample case of Smitten. The goal was to bring awareness about the variety and get it into the hands of consumers,” says Sage Fruit’s Sinks.

SUGARBEE. Chelan Fresh first introduced this bi-color open cross between a Honeycrisp and unknown parent in 2016. This season, the company expects to have 165,000 bushels of this proprietary variety between late October through mid-January, says Mac Riggan, director of marketing. “To promote the variety, we do grower tours, demos, and have a Sugarbee mascot available for store openings and other retail events.”

A PROPER INTRODUCTION IS KEY
It is critical to introduce and educate customers about new varieties.

“You simply can’t beat the exposure offered by stand-alone in-store displays,” says Rochelle Bohm, brand manager for CMI Orchards, in Wenatchee, WA. “We have many options for promoting fruit in creative ways, including displays that ship with fruit and require minimal execution by produce staff. If retailers can’t carry displays, the next best thing is signage and flavor information.”

Sample the new variety, suggests Chelan Fresh’s Riggan. “Cut fruit that may have a small blemish or bruise and engage customers at the same time. We call this demoing your shrink. Marketing makes the first sale, it’s up to the apple itself to make the second.”